You are here: Home / Film Reviews / I Love My Mum 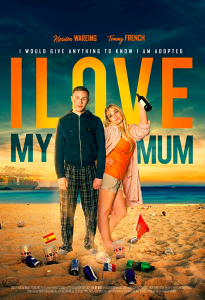 Bickering – so easy to do in real life – is a vastly underrated acting skill.

I Love my Mum, the new comedy from writer-director Alberto Sciamma, is soundtracked to the constant hum of tiny aggressions and endless reproaches, a stuck record that needs a kick in order to jump forward.

Olga (Kierston Wareing) and Ron (Tommy French) are so wrapped up in themselves that their adventures – though they take place across North Africa and Europe and include drugs, theft and (rather impressive) karaoke – still deliver less a kick than a gentle nudge. Though that’s less a criticism of the film, and more a recognition of the reality of many family relationships.

Mother and son live together in a flat in Tilbury. He is frustrated by her neediness; her terror of being alone plays out as thoughtless self-obsession. “Perfect, just here” she announces from her comfy spot on the sofa after sending him onto the roof to fix the TV aerial, as he falls off the chimney and dangles over the front door.

Claiming some unspecified illness – with no obvious symptoms and after years in a medically-mysterious remission – she guilt-trips Ron into always doing what she wants, and their lives remain stuck in a weird local loop.

They’re still squabbling in Morocco, where they find themselves after an unfortunate detour in a shipping container when they’re meant to be hitting the all-night garage in Tilbury.

It’s testament to Sciamma and his cast that these first few minutes of I Love My Mum don’t actually feel unlikely: the chemistry between Wareing and French (who both deliver consistently terrific performances) is spot on, and initially the movie bounces along, with no time for analysis.

Ron is in his PJ bottoms, Olga is in a grubby pink fluffy dressing gown and (by the time they get out of that container) last week’s make-up – yet no one in Morocco bats an eyelid. Truly there’s nothing left Brits can do overseas to even raise interest any more, so often have we defiled “abroad” with actions both appalling and monumental or embarrassing and trivial, all the while refusing to speak the language.

Their little arguments carry great weight between themselves if not the wider world: “you say your mother was eating your cheese without permission?” asks diplomat Henry Brentwood (Tim Downie) wearily, when they track down the British embassy and demand help getting home.

It turns out Ron may in fact be French, and the British have no record of him at all. With no money or passports they decide to go overland across Europe, with a vague plan to swim the watery bits.

Their trip home is really a succession of sketches, combine with some movie-level good luck and Daily Mail-level bad luck.

Some of these vignettes work better than others. Ron falling in love with a karaoke queen is clever and funny, an extended episode that I had no idea would end the way it did; Brentwood tutoring Ron in the correct way to pronounce his name now he’s French showcases both actors’ comic timing; crossing from Morocco to Spain in a boat full of migrants doesn’t really work.

I Love My Mum may be based on enjoyable nonsense but it bowls along merrily, and it works because the relationship between mother and son is thoroughly grounded in realism.

The constant arguing can become wearing, and the first act is certainly the strongest. The pair’s myopia around anything not about them means bigger issues aren’t addressed. Still, Sciamma avoids the laziness that still often litters films about stereotyped working class Brits meeting stereotyped locals abroad, and reversals feel natural rather than shoehorned in (an exhausted hospital doctor shouts at them to go home). It’s never dull, and is well-shot; there are some gorgeous scenes that illustrate the different African and European landscapes.

That realism means that while Ron realises he does need his mum, and starts to understand why she’s made some poor decisions in her life (eating his camembert for one), he also realises that she’s always going to annoy the hell out of him.

It’s not totally without redemption; Olga proves to be ingenious in a crisis, even if not always within the bounds of legality; and she steps outside her comfort zone to jump into a swimming pool and rescue a dog. They do grow, but like dwarf plants rather than majestic sunflowers.

They could probably be stranded in Tesco and it would still be fun watching them try to get home, as from the first scene the rest of the world remains mostly peripheral.

Their small scale tug of war as Ron yearns for something bigger and better, and Olga aims only to return to their flat in Tilbury, is both completely recognisable and will make you feel your own family is almost normal.

I Love My Mum is in UK cinemas now.

Watch the trailer for I Love My Mum: