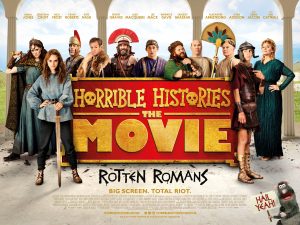 You know you’re in for a classy treat when a movie starts with Derek Jacobi reprising his role as Emperor Claudius. It’s only for a few brief minutes, before his evil wife Agrippina (an enjoyably scheming Kim Cattrall) and petulant son Nero (Craig Roberts) do him in.

But if Judy Dench can win an Oscar for eight minutes as Queen Bess in Shakepeare In Love, why can’t Jacobi be up for an Oscar next year?

His scenes combine period costume, regicide, and extreme vomiting, which pretty much covers both the arthouse lot and the summer holiday kids crowd.

Probably not; much as I enjoyed Horrible Histories: The Movie I’m not sure it’s Academy Award-worthy, though it’s still a tonne of fun, combining lessons both historical and moral (we all have value and something to contribute).

While undeniably sketch-like, with facts about Roman and Celtic life sometimes feeling shoehorned in, it follows one major historical event: Celtic Queen Boudicca’s uprising against the Romans. (I know, they could have picked one that we won!)

Boudicca’s campaign weaves around the story of Atti (Sebastian Croft) and Orla (Emilia Jones), two young people who learn they can be friends across the divide. And it does this while bringing the actions of the Roman invaders, and their effects on local culture – however useful aqueducts and straight roads may be – into sharp relief.

Atti, sent to Britain as a Roman soldier after playing a key role in dousing Emperor Nero in horse wee, likes our lush green country from the off – though he soon finds a stinkier side to it when Orla, a young Celtic girl desperate to be a warrior, captures him and ties him up in the family’s dung-walled hut.

Meanwhile Boudicca has taken to sacking and setting fire to various major cities (yes kids, St Albans used to be a major city), and is gathering thousands of supporters along the way.

The Celtic tribes haven’t been able to agree with each other whether to work with the Romans or against them; the Iceni have been cooperating, and now have a village of huts adorned with lovely white Roman pillars.

Sadly Orla’s tribe only has her grandma Brenda (Joanna Bacon), a kleptomaniac who steals anything not nailed down from neighbouring tribes, or indeed Romans. In fact if historians were to go back and examine some woman they found in a bog with 70 mismatched pieces of jewellery and the Saxon equivalent of a bus stop sign, they might find that it isn’t actually a high-born lady of great historical importance but Brenda and her loot.

As a movie this feels historically accurate in a broad brush way, though I doubt Celtic villages were that neat and clean. In fact it mostly looks as if it was filmed at the director’s nearest beauty spot that had a decent cafe. Centurions march up perfectly grazed and green hills, and it all looks like a Saxon Center Parcs. The final huge battle of Watling Street, pitting Boudicca and her 100,000 unruly Britons against 10,000 well-trained Romans, is in that sense a clean fight.

Obviously, you can’t show mass slaughter in a live action kids’ film, much as the bloodthirsty little blighters would love it; so the battle is low on death and serious injury. Still, it’s probably appropriate that a story about the Romans, possibly the most famous sanitisers in Western history with their baths and sewers, should themselves be sanitised.

And this is not Braveheart, it’s a children’s comedy film. I laughed a lot, particularly at the I Am Farticus joke (I did have to explain that one to my children though I’m sure your 7 year olds are already seasoned cineastes and will get it straight off).

Atti’s parents accuse him of spending too long on his scrolls; and there are plenty of word gags for parents, and kids with a more classical education. I particularly liked Warwick Davis, getting his gladiators psyched up for colosseum conflict with the exhortation that they need to give “CX PERCENT!”.

Even when the jokes don’t hit the os ridiculum (go on, get your old Latin primer / the posh kid from next door / Google to translate that for you) it’s still consistently amusing, and rest assured Horrible Histories fans, there’s plenty about the classical world’s toilet habits too.

The songs are witty, and you can actually hear what everyone is saying; the final musical number manages to be both slightly cringy about encouraging individual Celts and Romans to work together and surprisingly caustic about colonialism and invasions.

The film sometimes strays close to what has gone before – the scenes from Life Of Brian where we find out exactly what the Romans have done for the Judeans loom large – though I liked the Celtic version, where the convenience of straight roads is shown to have its own issues, with one poor villager finding his house is now in two halves with a road going through the middle.

Though Nero’s birthday present of a onesie made out of a hollowed-out bear may raise hairs on the backs of parental necks rather than laughs if they’ve seen Midsommar.

The film’s message of inclusivity, combined with its acknowledgment of the problems associated with stronger, invading cultures, is welcome. Ultimately, when Atti and Orla work together they are most successful.

The cast is full of British comedy names: Nick Frost, Lucy Montgomery, Sanjeev Bhaskar and Lee Mack. It’s always fun to see them though this is one of those films where the acting is of the loudly declaiming variety, as befits what is really an extended sketch – albeit a very entertaining one, aimed arrow-sharp at its intended audience.

Roberts’ Nero is clever as well as petulant, the most dangerous combination in an emperor. Croft and Jones are warm and lively: initially cheerily adversarial they end up besties, though this being a children’s film the focus is on them becoming friends and understanding each other’s strengths rather than snogging. (I can only imagine the “YUCK!”s and “URGH!”s from the littlies in the audience if it had taken that track.)

Note: There is a mid-credits history lesson from Rattus Rattus!

Read our kids’ review of the film, from Ashton aged 10.

Watch the trailer for Horrible Histories: The Movie – Rotten Romans below, and scroll down for two clips from the movie:

CLIP: Always listen to your mum!: