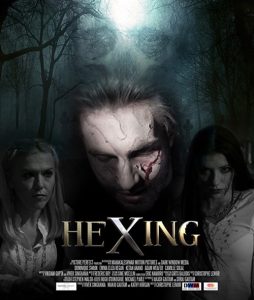 This is really a story about friendships: the unexpectedly strong and the poisonously clingy.

Though here the toxic relationship in question comes not from another person, but from a board with supernatural powers, that simply wants to be friends. And when it doesn’t get its way all hell breaks loose.

A young woman is waiting for an appointment with Miss Estelle in her antiques and curios shop. It’s all dark wood and gilt, with Miss Estelle herself richly clad like an old-fashioned fortune teller. We never find out what the appointment was about, and when the owner arrives she instead proceeds to explain about the terrifying history of the wooden board, or Yantra, that the young woman has been vainly rattling to and fro while waiting for their meeting.

Unfortunately as an opening it’s melodramatic and (along with the ending) tonally at odds with the central story; from Estelle’s antique shop to her accent, which is a real mixture. There’s nothing wrong with lush, overwrought horror, dripping with symbolism; it’s a style that has been used in films and on TV many times. It just doesn’t fit here.

Having said that, the main story is marked by some very good performances: particularly Dominique Swain, playing the outwardly brash but inwardly desperate for love Alice; Emma Eliza Regan as Hannah, a motherless young woman struggling with her relationship with her father; and Zeb Moore, who plays Hannah’s dad, floundering as he tries to reach her but unsure how.

Hannah lives with her father (she calls him David) in County Kerry in Ireland. Her bolshy, late-teenage relationship with him will strike a chord with many young people and their parents: “Can I get through my breakfast without your career advice?” she enquires, trying to butter her toast before work while he tells her she needs a better job. But the cracks in their relationship are heightened by the unspoken but still very painful memories of her mother’s suicide a decade before, after her father had an affair.

She works in a cafe-restaurant owned by the bullying Rodney, though her workmates go some way to make up for their awful boss. They’re a tight-knit team, well-characterised in the short time available; a believable group of colleagues and friends.

Alice is an American who came to Ireland for love and stayed, despite the later collapse of her relationship. Not averse to taking a hot customer into the restaurant storeroom when he asks about the specials, she knows what she wants and goes for it. The chef, Joe (Adam Weafer), also knows what he wants but continually fails to go for it; he’s a funny, sweet young man in love with someone who has no idea about his feelings. The three actors are convincing, their characters banding together to deal with the bullying, predatory men they have to face: Rodney, their permanently angry boss, and Eugene, the local bent policeman.

The wooden board in question is a Yantra, originally used in some Indian religions. This one can answer questions, though it has a more sinister purpose too, as the rising tally of deaths illustrates. The three of them find it in a junk shop, and like King Arthur’s sword it can only be removed by someone the board wants to have it. That person gets it for free, though it’s a poisoned chalice. No one can shift it except the unfortunate Hannah, who then has to lug it home. And once it’s found a friend, it wants to be friends for life.

When they first use the board it’s striking how illustrative of themselves their questions are: past loves and future plans. Alice’s queries are all about how previous partners actually felt about her; Joe wants to know if he’ll ever have his own restaurant.

Hannah is also having to deal with a stranger arriving in here family. Jake is a young man who simply appears at their home on her father’s say-so to stay for a few days. She initially finds him intrusive and even threatening, and his memories of their families’ entwined past are markedly different to Hannah’s.

But the board isn’t content to simply answer a few questions about exes; soon the death toll is mounting. This is a low-budget indie film and the deaths that we see are small-scale but quite effective. Though the purpose of the Yantra is rather muddled; even factoring in the gradual unfolding of the truth about its origins, the film’s themes of friendship, and what links it to Hannah. There’s a demonic, maniacal force at play, but what is the board for: to answer questions? Contact the dead? Kill people? All three?

There are some plot-holes. This is a town that appears to have more deaths than the villages from Midsommer Murders (a TV series that singlehandedly increased the English middle class murder rate to astronomical levels); yet no one seems aware of them. The mix of styles doesn’t work, from Miss Estelle, to billowing smoke, to an overblown flashback explaining the Tantra’s past in India. Even in the central story, on occasion people’s responses to the horror lurch into melodrama.

At times the dialogue isn’t realistic (the devil really is often in the detail). Rodney’s restaurant, which always seems bustling, seems to have an incredibly basic menu: people only ever order “coffee”, or “cake” – and no one is faced with a waiter’s astonishment that they don’t want to be more specific, which is what happens when I venture into a coffee shop and order a pot of tea (sorry, “English breakfast tea”).

I’d have preferred the same tone throughout, and a more frightening and less over the top introduction to both the story and the board’s mystical history in India.

Or that it simply went full-on with the demonic laughter-filled craziness.

Hexing is a low-budget horror film. To get the most out of it, it’s best to focus on the strength of the friendships it depicts, both now and in the past; how strong they can be, and how badly they can go wrong. And those terrific performances from Swain and Regan, portraying lost young women targeted by forces both earthly and supernatural.