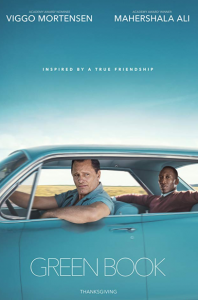 It’s 1962 and Tony Lip (so called because of his childhood ability to bullshit) is Security at the Copacabana Club in New York.

It’s an alluring and seductive atmosphere, for us as well as its patrons – with its swing music, elegant ladies and besuited men. But with the club shutting for refurbishment, Tony (Viggo Mortensen) needs to earn some money to support wife Delores (a warm Linda Cardellini) and their two boys.

He’s called in for an interview with concert pianist Dr Donald Shirley (Mahershala Ali), who requires a driver to take him to a series of concerts and recitals in the Deep South. Dr Shirley lives in a palatial apartment above Carnegie Hall and sits on a throne-like carved chair while interviewing the supremely confident Tony.

It’s an eight week trip with no breaks. Tony gets half his money upfront with the remainder once he’s delivered Don to every single concert (and ensured the venue has provided a Steinway piano).

Their road trip starts off scratchy and awkward, with Tony amazed by his employer’s request not to smoke in the car, and deliberately eating all the sandwiches Delores had prepared for both men. Shirley is also unimpressed, as his driver steals a pretty jade stone from a roadside stall and throws litter out of the window.

During the performances Don is the star, beautiful and elegant in white tie, playing popular music with his Don Shirley Trio rather than the Chopin and Liszt he trained on (though not as popular as the music Tony introduces him to on their long car journeys: Little Richard and Aretha Franklin).

But once off stage Don is just one more black man; instantly in one case, when he’s told to use a wooden hut outside instead of the toilets indoors during an intermission in his own concert. To navigate the racist rules of the area they use The Green Book: a manual for a “vacation without aggravation”, which lists where African Americans can stay or eat. Sometimes the two men are in the same hotel; other times Tony the employee is in the good hotel, while Don the rich employer and star is in a scruffy, noisy motel.

Green Book is both better and worse than I was expecting. Its script (co-written by Tony’s son Nick Vallelonga) is nuanced in places and tellingly clunky in others.

Its central idea is old-fashioned yet beguiling: that racism could be defeated if only black and white individuals got to know each other (with a side order of “and both tried harder/did better”). It certainly works well in heart-warming movies like this one, but it doesn’t tackle the structural racism that deliberately holds people back, and it expects people of colour to work harder on a personal level when they are its victims.

Still, Mortensen is excellent, and Ali outstanding – with Tony and Don’s unexpected friendship entirely believable as it slowly emerges from their shared experiences, Peter Farrelly’s direction keeping it both taut and equal.

Don is not just employer; he often seems like a parent too, sometimes harrying, sometimes quietly nudging, and sometimes giving him a well-deserved telling off, when Tony’s favoured tactics, fists and mouthiness, have failed to work their magic. Sometimes it’s his responsibility, when he’s trying to turn Tony into a smoother, more refined member of society; often it’s not.

This is a tour Don sought out; he’d have made more money in New York. Once in the South, he never shies away from racist situations and constantly puts himself forward, dignified protests highlighting their cruelty and stupidity.

Tony still has to rescue the pianist from dangerous situations, though; and both have their moments of naivety. Tony is visibly shocked by the blatant racism they encounter in the places Don isn’t allowed to go; one of the musicians in the trio points out to him that there will be plenty more such incidents during the tour.

Ali gives an elegant and immensely detailed performance of a man used to performing in both worlds, who finds himself too white for black people and too black for whites, even in supposedly progressive New York. His expression changes almost imperceptibly from genuine joy as Shirley finishes a piece with his trio and turns, face breaking into delight, to receive the applause and warmth of the audience; to the fixed smile of a man practised at being nice to people who disdain him.

The piano performances are mesmerising, long fingers dancing along the keys.

Don is a man of rarefied tastes who has never eaten fried chicken until Tony introduces him to the culinary joys of Colonel Sanders (I say introduces – Tony pushes Don for an uncomfortably long time to try it). Later, after a concert in a palatial colonial house the host announces they asked their “Help” what Don might like to eat, before presenting him with a giant dish of more fried chicken.

For Tony, away from his family, it’s a struggle to maintain a connection and explain how much he loves them. He labours over letters home, detailing every meal, particularly the scarcity of authentic spaghetti and meatballs. It’s Don – as pernickety about grammar as everything else – who, after rather brutally telling Tony how awful his letter is, dictates a new version and then several more. They’re genuine love letters, elegant without being flowery, direct but never coarse. And they’re an earthquake in the Vallelonga family, as the women swoon and the men grumble at how Tony has raised the stakes.

Like Don’s musicianship, these letters are perfect interpretations that jump the gulf between instigator and their intended audience.

Green Book flips a lot of racist tropes to make us think: it’s Tony Vallelonga who’s constantly told how hard it is for Southern folks to pronounce his name. And to give Green Book its due it doesn’t ignore other prejudices which Don would have to deal with. He’s a gay black man who knows he should be allowed intimacy; he also holds some classist views of his own.

It’s a beautiful road trip, that’ll be thought-provoking for some and eye-rolling for others. The fastidious Don loosens up and tries things he previously thought were beneath him. Tony is less racist than at the start (early on he had thrown away two glasses used by black workmen in his home), and more willing to stand up to racism, though overall his and Don’s experiences appear to have reinforced his beliefs that it’s all just about getting along better.

“Dignity always prevails”, says Don, but on its own it isn’t enough.

Watch the trailer for Green Book: