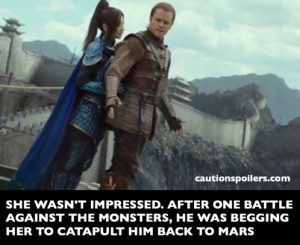 But William is simply a mercenary, now in China because he is searching, with his friend and accomplice Pero Tovar (Pedro Pascal), for the semi-mythical substance black powder which can turn air into fire. William’s home has been the battlefield since he was sold to an army as a small boy, first to help clear up after the bloodshed and later as a fighter himself. But not for his country – for food, and then for money.

Commander Lin has been training in fighting, strategy and weaponry since she was about the same age, but she fights for something more than just herself. Everything she does, or expects her soldiers to do, is imbued with “Xin ren” – trust. It’s the whole basis of this community of fighters and their supporters. So it’s not surprising that Lin refutes William’s claim that she and he are alike.

I really enjoyed The Great Wall, although (or possibly because) I am not the target market for a monster-filled blockbuster about war. There is no love story but there is a lot of fighting, saving friends, sacrifice and redemption.

Captured by the Chinese at the Great Wall, in possession of a – to them – unknown monster’s limb which William has managed to slice off during an unexpected altercation with the beasts, William and Tovar are first destined for execution. But Commander Lin and her Crane Troop are distracted by an attack on the wall from the monsters, something not expected for several days. As lizard-like creatures hurl themselves en masse at the huge structure, their Queen bringing up the rear, the two mercenaries are first merely observers to the battle unfolding around them, and then, when someone releases them, finally part of it themselves.

The monsters are temporarily repelled. Known as the Taotei, Strategist Wang (Andy Lau) explains that they appear every 60 years, apparently to demonstrate man’s terrible nature, though all they really seem to do is demonstrate their own terrible nature (in their defence they do clean up after themselves afterwards, dragging their dead off with them. Possibly the result of having a queen rather than a king.) Of course every monster that could easily overwhelm humans needs a weak spot and theirs is that if the queen dies they are all left directionless and useless. (Not unlike my own children who are incapable of doing anything without very detailed explanations and much shrieking from me).

After that first initial fight, grubby and stinking, William and Tovar are urged to clean up – so from now on in the film Matt Damon looks like Matt Damon again, but with an 11th century man-bun, proving that we have learnt nothing from the past. Thanks to their assistance in defecting the attack, they are invited to a banquet of the Nameless Order, which has been set up solely to defend the Wall against the monsters.

But William and Tovar aren’t the only westerners there. Ballard (Willem Dafoe) is also after the black powder but can’t leave, and he continues to tempt them with news of where it is stored and how they could all escape with it. (Dafoe is chronically underused, wandering round the fortifications like a ghostly monk from an old English folktale. He has apparently been stranded there 25 years, but we don’t find out much more. Either his character is woefully underwritten or there is a lot more of him on a cutting room floor somewhere).

Meanwhile work continues to prepare for the next onslaught, as the wall is all that is holding the creatures back from reaching the capital. Once they reach there, with its enormous food supply (humans), there will be no stopping them from spreading across the world.

The Great Wall feels very feminist. Shao (Zhang Hanyu), the Nameless Order’s general, simply expects Commander Lin to do her job, she’s there because she is the best and there is nothing for her to prove beyond being a commander and a strategist and a brave fighter. There are women everywhere, throwing themselves off the side of the wall on hoops attached to bungee chords, spears in hand (the growing pile of empty, bloody rings being hauled up without their fighters showing how deadly their job is); or sending drum signals in perfect time to alert the fighters of the latest order.

And it really is an incredible spectacle. It’s easy to be blasé about CGI or large scale models in films nowadays but the weaponry looks extraordinary – blazing balls of rock catapulted over the wall and down below into the valley filled with writhing, attacking monsters; scores of screaming arrows fired as one by the expert bowmen above; cranks and pulleys and signalling drums. Every time the monsters get the upper hand a new type of weapon is unveiled (though one does rather wonder why they didn’t use those at the beginning and end the attack before it has really begun). The costumes are lovely with the brightly coloured armour and flowing capes leaving the killer women soldiers looking like Power Rangers as they gracefully fall through the air towards the monsters. All the armoury seemed easy to move and fight in.

There are some dry exchanges but by and large the humour falls rather flat. Tovar does get to deliver a few good one liners but it wouldn’t have mattered leaving them out. There aren’t enough there to define his friendship with William for a start, a relationship where it is never clear whether it is is based on necessity or genuine affection.

The script is pretty basic (to be fair the weaponry and the wall itself are the stars of this film) though Damon does his best with it. His accent is bizarre though, sometimes American, sometimes sort of English, and once it veers into Irish.

Jing Tian was the biologist San Lin in Kong: Skull Island but said and did very little in that movie which was a shame. In this film she is terrific, holding her own perfectly well against Damon and it’s nice not to see a love story tagged on. The relationship between Lin and William is one of mutual respect.

There have been accusations of whitewashing over Damon’s casting though he isn’t the traditional white saviour type here. The character is simply a European mercenary, in the country to obtain something only the Chinese have, who during his stay there learns from the Chinese. The question should presumably be: do films really need to include western characters to appeal to western audiences? Could this have been a film with monsters attacking the wall but with a different subplot? Then again as a woman I know how frustrating it is for well-meaning men to mansplain to me about women in films. So I shall stay sitting on this fence on this one, in the shadow of a huge Chinese wall, with a western mercenary fighting above me, and splinters in my arse.

The Great Wall is a blockbuster so it is certainly filled with cliches: the monsters – of course! – are becoming more intelligent and learning how to be strategic in their aims; the sidekick provides the dry one liners; attempts at quelling the creatures fail until there’s only one weapon left.

There are enjoyably daft plot holes galore (at one point a large section of wall opens at the bottom and my friend remarked that they could have done that a whole lot earlier and killed a lot more monsters), and an extremely lucky finding regarding magnets which you can imagine being dreamed up in a writers’ meeting as they couldn’t think of anything else (one day I’ll film a monster movie in my kitchen and luckily for humankind but unluckily for the monsters they will be allergic to homemade flapjacks, and the high pitched screeching of my five year old will make their heads explode). But The Great Wall is a fabulous looking romp that is lots of fun to watch. It’s also quite tightly edited (it comes in at about 1 hour 45) which nowadays practically qualifies it as a short film.