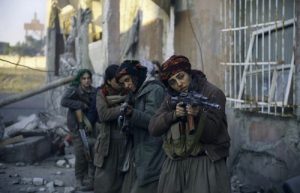 ISIS fighters believe that if a woman kills them they don’t make it to Paradise, which gives the female Kurdish fighters in Eva Husson’s film another layer of fuck-you on top of their extraordinary bravery, and skill.

In fact leader Bahar (Golshifteh Farahani) even answers the iPhone of a man they have just killed and tells his brother on the end of the line exactly that.

Modern wars still surprise with their mix of everyday technology (iPhones), everyday locations (houses as prisons), and soldiers with ordinary working backgrounds (Bahar was a lawyer) all surrounded by the timeless rubble and smokey chaos that could come from a thousand different conflicts. It’s a stark reminder of how easily this could be any of us.

Initially Girls Of The Sun (its French title is Les Filles Du Soleil) follows Mathilde (Emmanuelle Bercot), a battle-hardened French war reporter. Her husband is dead, her child left at home, as she waits for days for a chance to get to Bahar’s location in Kurdistan, where they’re trying to retake their town from ISIS. Mathilde must surely be based on the late American war reporter Marie Colvin – she has an eyepatch, the lost of an eye caused by shrapnel in an earlier conflict.

Eventually she makes it, though as she is arriving the other embedded journalists are going the other way – hers was not only the last helicopter in but also the last one out.

The battalion she joins is made up entirely of women ex-captives, and we see Bahar’s experiences of captivity in flashback.

Addressing each other as comrades, they are a close knit bunch, physically as well as emotionally supportive. Bahar is one of those natural war leaders – a mix of drive, stoicism, and occasional flashes of primal passion – who find out their real strengths only when something cataclysmic occurs and there’s no way of escape.

Bahar wants to retake the hill and then the town; her male commander prefers to wait for coalition bombs to fall. But they also have to be on guard for the battle coming to them. One such skirmish results in the capture of an ISIS fighter, who tells them the school in the town still has children in it. For Bahar this means her young son could still be alive, in an ISIS Lion Cub School, where boys are trained to fight.

But the storyline which had me gripped wasn’t actually Bahar and her team fighting and waiting, fighting and waiting. The flashbacks to her captivity and escape are in many ways more dramatic, to the extent that when we’re pulled back into their present I’ve almost forgotten why.

The mundanity and provincialism of captivity is well done; banal surroundings housing terrifying experiences. Young boys are torn from their mothers. An internal door opens and a woman is taken away and raped. Afterwards one kills herself. Bahar is sold on several times, as men become bored with her and her value drops; she’s also considered too old (she looks late 20s), as they prefer abusing very young girls.

The women’s escape from ISIS is thanks to a rescue set up almost in an almost comically prosaic fashion, while still being literally a matter of life and death.

Without going into “I’m a mother and I feel things very deeply” territory, actually wait yes I am, I did cry at this screening (are you allowed to cry at Cannes? Boohoo rather than simply boo, apart from if you’ve been turned away from a red carpet gala in front of hoards of people and massed TV cameras? Probably not). Though I was well aware how signposted and deliberately manipulative the scenes which left me snivelling were.

Farahani is terrific as the haunted fighter, battling for her country and her son, forced to keep pushing forward.

Bercot certainly conveys a sense of ennui, and the responsibility of being a witness. Though her story, when it is not pushed to the back, is handled rather clumsily. After the flashback scenes I was left wondering what Mathilde was there for. And her voiceovers aren’t necessary.

The stepping up to battle of these women is both encouraging and also highlights our own limitations (well mine, anyway. You may indeed be the person we need in a military crisis).

It’s also a reminder that we can walk away, an option not open to Bahar and her battalion once they commit to joining up. They get their victory, even if it turns out to be a small one in the great scheme of war.

Girls Of The Sun is not a particularly long film (it’s about two hours) thought it did feel a bit of an endurance. It is sometimes very earnest, and often obviously manipulative.

The scenes as they wait and plan can drag (then again, war is a mixture of extreme boredom and extreme terror. And the skirmish I mentioned at the beginning is a good example of the sudden return to battle, with its initial smoke-filled confusion, quickly followed by relative calm).

What the film does well is bring home those activities and situations that link many of us: having a baby, being a mother, working at professional jobs, before being thrown into a horrible situation not of their making.

Girls Of The Sun is sometimes gauche, and it never digs very deep. But it reminds us of a small story within a larger war that is already in danger of being forgotten (I had a guilty “oh yes!” moment as I recalled news reports of these women fighters a few years ago).

Is it a feminist film? A radical feminist approach would be that the systems need to be torn down and rebuilt rather than simply putting women into them to effect slight change. But that’s not really an option in imminent life or death situations. I don’t see the focus on motherhood as unfeminist at all – if anything was going to get me to creep through a mined tunnel it would be to find my children, snatched from me in a man’s war.