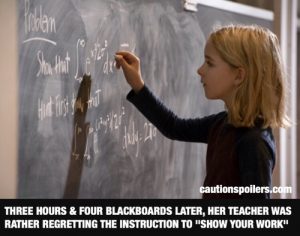 Movie Law dictates that any film about maths geniuses must have at least one scene with hundreds of equations being hurriedly chalked on a giant blackboard. But what I want to know is are these film squiggles real, and if so who writes them? First Hidden Figures, and now Gifted – either Octavia Spencer, who appears in both, is a real-life mathematical genius, or someone, somewhere is supplementing their meagre academic salary as “Movie Maths Monitor”.

Anyway I’m afraid I’m going to go on about Gifted “ad nauseam” as I loved it. Admittedly I was initially slightly put off seeing it as though I love film titles with puns, I hate the trend for making nouns into verbs – but I’m glad I put aside my pedantry, as Gifted is a wonderful film that manages to tread that fine line between sincerity and sentimentality.

Gifted is ostensibly about a child prodigy, and a court battle over her, but it is as much a story about a little girl who is at least partly expected to solve problems – both mathematical and everyday – for other people. Everyone fighting for her claims to have 7 year old Mary’s best interests at heart, and they may genuinely think that, but it is not entirely true.

Mary (Mckenna Grace), just starting school, is a maths genius who likes to discuss the Euro with her dad, but has no friends her own age and no social skills. Her closest confidents are their neighbour Roberta (Octavia Spencer) and Fred the one-eyed cat. Blonde and frankly often quite rude, Mary rather reminded me of myself as a child apart from the fact that I wasn’t gifted at anything.

Her uncle Frank (Chris Evans) has brought Mary up in Florida after his sister Diane’s death. Diane was also a maths genius with terrible social skills, and was trying to solve Navier-Stokes, one of the  7 Millennium Prize Problems, when she killed herself.

Frank is determined to give Mary, in line with her mother’s wishes, a normal childhood – something she never had. So he sends his niece off on the yellow school bus with the exasperated exhortation to “I don’t know, try being a kid”. Mary seems to knows the answer to everything (though sadly not why American schoolchildren have such enormous backpacks), so while her fellow first graders are spending their first few days in school working out 2 + 2, her new teacher Bonnie (a delightfully genuine Jenny Slate) has her doing complex equations. But Mary’s brilliance has been at the expense of what could be termed appropriate behaviour, and she’s frequently in trouble.

Frank works as a boat repairer through the week then on Friday nights heads to a local bar where his charms seem to be noticed by everyone but him: “he’s the quiet, damaged hot guy” says a swooning fellow teacher of Bonnie’s, as she recognises him in school, on one of his many trips to collect Mary after one of her frequent rule infractions.

Then just as Mary is learning how to be a child, in walks her “very British” grandmother Evelyn (Lindsay Duncan). Bearing gifts that only a 7 year old maths prodigy could love (a MacBook preloaded with mathematical texts) she is convinced that Mary’s rare talent will be wasted living with Frank and going to a normal school, so she sues for custody. It is with Evelyn that Mary first sees the monument to the 7 Millennium Problems, including Navier-Stokes, and Evelyn plants the seed in her mind that one day Mary’s photo could be above the solved problem – finishing her mother’s work.

Neighbour Roberta (Octavia Spencer) is funny and caring – the nearest Mary has to a best friend, she is also a realist who doesn’t rate Frank’s judgement when it comes to the girl. “You couldn’t even get a white lawyer” she tells him as the case hits the legal system, then later offers to lend him a book called “Fundamentals Of Decision Making”.

The drama is well-paced, and it never lingers too long – so though there are court scenes this doesn’t turn into a stuffy courtroom battle. And everyone is reassuringly human, with human complexities. Frank may want to do the right thing but family life is imperfect and so is Frank as a guardian. (Though he’s bang on that “the manufacturers of Legos, they should all be in prison”, which is possibly the first expletive-free response I’ve heard from someone stepping on some in bare feet.)

There is not a single duff performance in Gifted. Mckenna Grace, who plays Mary, is simply astonishing and it is mostly her performance which steers this film – which could so easily have been mawkishly sentimental – away from cliche. By turns funny, angry, childish, and impossibly grown up, Mary eventually shows her rage at being let down by people supposed to care for her in the way only 7 year olds can, with tears and screaming.

Frank and Mary’s teacher Bonnie have great chemistry – their bar-room drinking game is a delight and their burgeoning “should we/shouldn’t we/no we shouldn’t but we will anyway” relationship is perfectly pitched – my only criticism is that Bonnie simply isn’t in the film enough. She pops up at the beginning when Mary has a rather difficult start to school life, but then in the second half she barely appears at all.

Evelyn has clearly had tricky relationships with both her children, and has punished them with her silence for wasting their talents. But as her motivations become clearer she is easier to sympathise with, if not agree with, especially as Mary is her only link to Diane – a woman she could only be close to through maths.

Gifted manages to avoid descending into cliche, though admittedly the ending could’ve been very different if Evelyn, heavily allergic to cats, had only splashed out on some Piriton. But if it sounds as if Gifted follows a well-trodden movie path, it manages to deviate just enough to keep us on our toes.

Buy Gifted on DVD or Blu-ray on Amazon.com