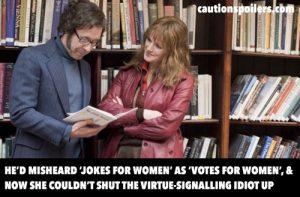 In the 1970s the Northern working men’s club circuit was both a launchpad for an entertainment career and a dismal corner where acts went to die. If they even had the energy to do that. And in Funny Cow, as well as comics, singers and ventriloquists, we’re treated to a performance by the world’s most apathetic stripper.

Wiggling enervatingly around the floor, removing her bra before pulling it back and forth through her buttocks as if trying to dislodge a particularly recalcitrant bit of loo roll, she perfectly sums up the tiredness of the format and the smoky, tatty venue.

We never find out the stripper’s name. Or Funny Cow’s name, or her mum’s. In the credits she starts off as Funny Calf, but as a child she’s frequently addressed as Fucking Cow by her violent father, before being accidentally renamed as she hits the local clubs decades later.

We don’t see that much of Funny Cow on stage, though the movie starts with the comedienne, resplendent in red sequins, regaling us with tales of Rotherham: “we’re not twinned with anywhere… but we’ve got a suicide pact with Doncaster” she says to laughter, though it’s a stolen joke.

Her story plays out in sections set years apart, interspersed with Funny Cow in a studio speaking directly to camera about her life and her feelings; it looks like a 70s chat show but the silence makes me wonder if she’s alone.

Her childhood is horrible though her mum does her best. The neighbouring children laugh at them but Funny Calf (a bright and humorous performance from Macy Shackleton) is irrepressible, constantly risking ridicule for applause.

When her father dies she’s ecstatic, peering into his coffin to make sure he’s really dead, cheerily announcing “it’ll warm up in a minute, Ma!” as they wait for him to be cremated in a chilly church. Years later, her would-be mentor Lenny tells her “it’s not about being funny love, it’s about surviving” but for Funny Cow the latter leads to the former.

It’s heartbreaking when free spirit Young Funny Cow (Hebe Beardsall) moves in with then-boyfriend Tony, and he hands her money with a demand she buy his tea. In that instant she realises they aren’t equals and she hasn’t escaped anything.

Maxine Peake (Funny Cow) is extraordinary as a woman brutalised by father and husband, pulling herself up by her fingernails while building a carapace that will protect her from brutish men and a brutish job. It’s a hard-shelled combination of deflecting wit, drive and self-reliance. Watching her desperately reciting her act as she climbs the stairs to her flat after a huge career mistake is breathtaking.

The terror of going on stage, and the corresponding buzz she feels turning the audience on a heckler, are palpable. It’s a job by turns terrible and wonderful, and one that Lenny warns her against. Not a job for a woman he says, though not a job for him either.

Lenny (Alun Armstrong, squalid, washed-up perfection) is an experienced local comic, though the circuit is so small most of the audience have heard his routine before and are quicker to the punchline than he is. A few of his jokes are quite funny but no one is listening, and he knows from experience that the way to bring the audience back around is to start the racist routine. But overall Lenny is on a downward trajectory and dies many deaths as Funny Cow bleeds him for advice and watches from the wings.

The clubs host everyone from terrible comics to talented singers – there’s a wonderful cameo from Richard Hawley and a sublime Corinne Bailey Rae, who have the local audience rapt.

It’s sometimes a tough watch. The abuse she endures from husband Bob (Tony Pitts) is horrifically realistic. And the jokes are of the time: racist and homophobic. Unnervingly, it is those jokes which routinely turn the audiences in the comics’ favour, when the performer’s fate has just hung between stage death and success.

Funny Cow is flawed and hard to reach. She’s an ungenerous conversationalist. Her middle class boyfriend Angus (Paddy Considine, sporting sideburns like a giant’s merkin) tries in vain to establish a rapport when she first ventures into his empty (yet apparently extremely profitable) bookshop.

She’s a woman escaping one life but unable to settle in another. A theatre trip to see Shakespeare will strike a chord with anyone who has sat in an audience that has to prove its understanding of the Bard by laughing uproariously at a joke out of all proportion to its drollery.

Family relationships are fraught (we meet her brother’s wife only briefly, but Jean’s bosom-hoiking at the unexpected arrival of her successful sister-in-law is a joy).

Her mother has been a heavy drinker for years – Lindsay Coulson is terrific, bitter and desperate for love at the same time.

There are funny cameos from National Treasure (Existing) Vic Reeves and National Treasure (Newly Elevated) John Bishop, as two talent show entrants: the world’s worst ventriloquist, and an Elvis impersonator with his own hound dog. And I can’t think of a better reason for a celebrity edition of Britain’s Got Talent than to see their acts in their entirety.

I liked that Funny Cow doesn’t really change, and doesn’t need anyone. She simply moves on up, happy in her success, her self-earned money meaning she can live life as she wishes.

She reminds me of Marti Caine, who also escaped a tough background via the Northern club circuit, enjoying success in the ’70s and ’80s.  I remember her on TV, glamorous in her sequins, with bouffant red hair. I don’t know her real name either; it certainly wasn’t Marti Caine, which was something to do with spotting tomato canes in a catalogue.

Director Adrian Shergold has recreated a grimy milieu that will take you right back, in attitude and looks. The colours are dreary with the odd flash of glitter, though Funny Cow is often in red, from childhood onwards. “Going out” tops are paid for in instalments. The 80s brings huge perms and hair lacquer. There’s more smoking than in the Alien franchise and combined with the hairspray it’s no wonder we spent the decade obsessed with spontaneous human combustion.

Communities are tight-knit, but hard to escape; an audience can destroy you or wilt beneath your edgy caress. “I’ll conquer them wi’ love” says Funny Cow, though love seems in short supply. It’s more that she overpowers them with wit, anger and fearlessness.