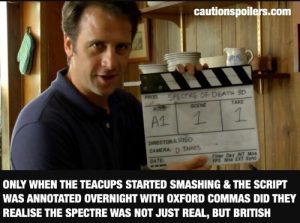 My favourite line in Found Footage 3D, as I’m pretty meta too, is when lead actor Derek argues with his brother Mark, who’s announced he’s leaving the haunted cabin and taking Derek’s ex-wife and lead actress Amy with him.

FEARnet’s Scott Weinberg is arriving for a set visit the next day and Derek challenges Mark with: ” Ask her to choose between you and the film critic!”.

What Derek thinks will set his work apart from other found footage films (and all that unfound horror footage lying around in creepy cabins all over the USA) is that both Spectre Of Death, and the documentary about it, will be 3D.

Spectre Of Death is about a young couple, presumably also called Amy and Derek, staying in a cabin in the woods in a last ditch attempt to save their relationship. But during filming strange things occur and it starts to look as if cast and crew could soon be in their own found footage movie.

The last found footage movie I watched was sasquatch film Willow Creek, which worked brilliantly because of the beautifully touching relationship at its heart (no, not one involving a Bigfoot). Found Footage 3D also works because of the central relationship, even if it’s one already cracked and splintered.

Barely civil to begin with, real Amy (Alena von Stroheim) and Derek (Carter Roy) agreed to make the film together when they were still a couple. Early on they’re discussing their jointly-written script while Derek talks down her role at every turn, and that’s him at his nicest. She knows how to wound the would-be auteur though: “did you get that from one of your twelve dollar internet screenwriting courses?” she asks, when he’s wittering on about the heart of film.

I often had no idea when they were real Amy and Derek and when they were Spectre Of Death Amy and Derek, which is partly deliberate but also partly thanks to how well the relationships between the Amys and Dereks are portrayed. Their seemingly inexplicable backwards/forwards relationship characterises how many couples end: sweet words sandwiched between horrific insults and backstabbing.

En route to the cabin there’s a clever scene where two old-timers are patronisingly roped in, only for them to issue warnings about the shack they’re heading for. Sound man Carl (Scott Allen Perry), already nervous, is not happy: “you don’t bring a film crew to a haunted house to film a horror movie!” (Big, bearded Carl is terrific – the kind of man I would demand to have by my side during a bloodbath only to find out he was actually hiding behind me, wibbling).

There are umpteen arguments between Derek and crewmates, who have to reverse-engineer character motivations to fit with his orders as otherwise all they’ll be left with of their found footage movie is footage.

And no-one’s happy with that title. Spectre Of Death, a spelling apparently too British, makes them wonder if everyone will watch it in “Theeatturrs”, and sorry guys I should tell you that over here we see films in cinemas. Theatres are for watching Shakespeare and shit.

The initial scenes about how they will make the film are understandably self-referential. I know only the basic “rules” of found footage so it’s not surprising I found it more engaging, with a more entertainingly jarring mix of jokes and scares, once the action moved to the cabin.

A cabin which couldn’t be more perfect for a horror movie if a blood soaked mass-murder was about to take place. It’s in a wood. There’s a sign saying Dead End. And while the house initially has no electricity, it does have an animal head on the wall and an old piano. The kitchen is filthy, the bedroom strewn with belongings as if someone left in a hurry. That night, animals scream and a baby wails.

There were some things I didn’t get. There’s a horrible assault which is barely referenced afterwards, until the victim sees her attacker leaning over and laughing with another girl in exactly the same position. And sometimes mumbling made it impossible to hear the dialogue. Traditional I know (even Carl opines that “the task in a found footage movie is to take really good sound and make it sound as shitty as possible”) but if someone is saying what could be their last words it’s only polite to make them audible.

Critic Scott Weinberg pops up as critic Scott Weinberg, visiting their set. His reactions to their tiny crew, grim location and actual footage are hilariously bemused, with his priceless response to the carnage in the bloody final act quickly followed by a perfectly-timed exit.

The spectre, who isn’t wearing a union jack cloak and drinking tea, so we should probably call it the specter, isn’t frightening, though its visitations are. And the crescendo of panic as strange happenings increase in frequency and danger, countered with reassurances no one believes, is tangible.

It’s a good cast with von Stroheim absolutely astonishing as Amy. She constantly keeps us guessing how much agency she has within the group and over the mysterious and increasingly terrifying events. Later, lost in the woods, we can hear her but not see her, and her desperate calls for help are heartrendingly chilling.

The makers of Found Footage 3D clearly love the genre, though the crew within a crew don’t particular care for it. Derek’s an opportunist who thinks audiences are stupid. Director Andrew (Tom Saporito) is crushing: “why people waste their fucking money on this vomit-inducing amateur hour bullshit is fucking beyond me” he rages at the documentary camera, followed by “fuck fuck fuck please delete that no fuck it I don’t care”.

Is Found Footage 3D scary? I’m pathetically easy to terrify. I would never make it to a Final Girl in a horror movie, though I’d be a good First Middle-Aged Woman, taking a coward’s escape which would make my early and bloody on-screen death very much audience-approved.

The version I saw wasn’t in 3D and I imagine it’s considerably more frightening in that format. But I was still scared enough to stop watching alone at night and pick it up again next morning. To be honest just being stuck in a cabin with Derek would be bad enough; he’s a postmodernist sociopath.

Found Footage 3D is available via Shudder.com, with subscriptions costing £4.99/month in the UK.

buy the dvd or blu-ray on amazon.com

Buy the 2D version on VOD or watch with shudder via amazon.com

watch the 3D version with shudder on amazon.com