You are here: Home / Film Reviews / Fighting With My Family 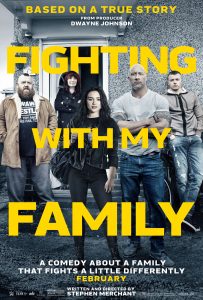 You could argue that this dramatised account of WWE wrestler Paige’s rise to glory is as scripted as the fights it portrays; no one’s success trajectory could so closely follow the “funny and heart-warming” movie template. Then again, if you stay until the end of the film, the footage of the real Paige’s real family in the credits, saying lines that we’ve just heard in the movie, indicates that actually it’s pretty close to the truth.

I know nothing about the world of WWE (World Wrestling Entertainment). When I was growing up, wrestling in the UK meant man-mountains Big Daddy and Giant Haystacks on ITV Sports every Saturday afternoon, smacking their enormous stomachs into each other. The idea of a gorgeous bikini model fighting a teenage Morticia from Norwich was way off my radar.

It’s an extraordinary world. Wrestling isn’t faked, it’s fixed, we’re told – though when Paige gets going it looks pretty real to me, as she fights among the sparkles, spangles and supertans for the misfits and weirdos of the world (and particularly Norwich).

The wrestling ring exerts a remarkable pull. “it’s like crack cocaine and heroine all mixed together!” her mum tells the young Saraya, leading her daughter to ask if she’d done them. “Not together” says her mum, hurt.

Her parents Julia (a scarlet-haired Lena Headey, absolutely terrific) and Ricky (a bushily-bearded Nick Frost, the supportive yet lightly criminal dad we all need) adore each other, having met when she was living on the streets and he was fresh out of prison for armed robbery.

They’ve worked their way up while raising three children, along the way inventing the World Association Of Wrestling, a title painted on the side of their dilapidated van and headquartered in Ricky’s grapple gym.

Paige (Florence Pugh), then known as Saraya, and her brother Zak (Jack Lowden) wrestle from childhood in their parents’ competitions, but it’s when both teenagers are invited to London to try out for the WWE’s Florida training programme that the renamed Paige gets her chance at the big time (and meets The Rock along the way).

Zak, though, does not, and his coming to terms with the realisation that he’s what WWE trainer Hutch (a rather by-numbers Vince Vaughn) calls a “journeyman”, is probably the standout performance of the film.

It’s a hard realisation, that actually your dream is and should remain exactly that. Lowden’s sensitive portrayal ensures that Zak’s travels along that road have an elegance about them, despite the character’s wobbles, as he eventually discovers a different dream with no less important outcomes.

Over in Florida, the goth-like Paige (long dyed black hair, lip ring, pale face) is the polar opposite of the other young women training with her. Not even wrestlers, they’ve been brought in from modelling and cheerleading backgrounds to add glamour. Frozen out by the blonde amazons, the shorter, less leggy Paige is lonely, missing her family and wondering if she should just give up and go home.

And Florida is a confusing world. How much Saraya can she keep hold of, when their training programme is so identikit, yet they demand that her selling point be her own authenticity?

Her attempts to blend in – bleaching her hair and trowelling on the fake tan, leaving her looking like a cross between Daenerys Targaryen and an Oompa Loompa – don’t help. (“Like kissing an Afghan hound” says her dad of her luxuriantly white-blonde mane when he’s giving her a cheer-up cuddle at Christmas.)

Meanwhile her parents are making a fortune with their homemade Paige merchandise, even if they can’t spell her name right when they forge her signature.

It’s a funny title, as Paige goes from one imperfect family in Norwich to another in Florida, fighting for one and then with the other. Her return home at Christmas, a time most people end up fighting with their own families and desperate to leave, is telling.

The film is often formulaic, to the extent that it doesn’t always make sense. Paige is apparently at fault for not asking the blonde beauties about themselves and their families, but I never saw any genuine friendliness before that from them towards her (though they love her accent from the off: “you sound like a Nazi in a movie!” one tells her). Why does she keep coming last when she’s the only one who knows anything about wrestling?

But the dialogue is so perky, and the performances so winning, that as the story races on (it’s an hour and 40, the perfect length frankly) the cliches don’t really matter. They may pile up but they’re easy enough to smack into a corner to a huge cheer from the crowd. And to be fair there are several points when characters would be expected to come out with some unlikely line but don’t. Sometimes Paige simply freezes, overwhelmed by lights, glamour and the knowledge this is her big chance for her and her family.

It’s a cliche to declare a working class family a movie’s beating heart. But Ricky and Julia really are the centre of this mostly true story. The Knights are a self-reliant joy to listen to from their love story beginnings to their minor law-breaking. “Run to the corner shop and nick a bottle of champagne!” Ricky instructs one of his pupils excitedly, when they’ve just heard Saraya is going to the US.

Pugh is a very winning heroine (though her accent meanders). Her Paige is real and flawed, acting on instinct out of the ring even when within it she knows the scripted moves intimately. The chemistry between her and the rest of the Knight family is pitch perfect.

I don’t know the background to the WWE though I’ve read about the increasing success of, and respect for, women’s wrestling, which the real Paige apparently contributed to. Though really you don’t need to know anything about that to enjoy this movie. Director Stephen Merchant (who also cameos in the film, with the world’s worst stick-on moustache) has crafted a bouncy, hilarious and sometimes quite emotional story, with more heart than a stationer’s on Valentine’s Day.

And considering how tough this country makes it for anyone in trouble to move on to better things, in some ways the triumph of the tale is that the Knights manage it: running a business, (mostly) keeping out of trouble, staying together, bringing up their children and helping other local, aimless or disadvantaged kids to channel their abilities into wrestling (and have some fun).

Despite their quite traditional set-up, they seem to have the best grasp of what family actually means.

Check out cast and director interviews,  film clips and images from the film

Watch the trailer for Fighting With My Family: