You are here: Home / Film Reviews / Fantastic Beasts: The Crimes Of Grindelwald 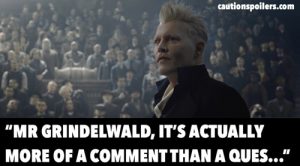 Welcome to Fantastic Films And Where To Find Them, as somewhere in Crimes of Grindelwald there are several sparkling and compelling stories trying to get noticed, yet sinking under the weight of everything else.

Crimes Of Grindelwald has so much beyond its magic and mythical animals: unrequited love, death, guilt, sacrifice, gorgeous 1920s outfits, and a floating silver teapot. In fact it has far too much of everything, particularly plot threads and characters.

This does feel like a film designed to keep us busy in a holding pattern for the next one.

There’s a parallel with fascism (Grindelwald uses the rise of Hitler as a lever even as he himself is courting the wizarding world’s pure-bloods), plus the odd reveal to carry us forward, and lots of bangs and whistles to keep us entertained. And it is entertaining in the moment; it just lacks a coherent thread, and much excitement.

Characters appear with intriguing half-told back-stories, then disappear for long periods. Many of them should have had more time, while others seem to have been brought back from the first Fantastic Beasts for no real reason.

And despite plenty of evidence of Grindelwald’s wickedness, from his early escape from New York to the final showdown, he isn’t particularly menacing. He reminds me of a hair-gelled, once cool teenager who hasn’t realised he’s now 45 with a mortgage and a bad Salvage Hunters habit.

Before any Potterverse fans put me down as the film reviewers’ version of a snooty old Slytherin though, I can tell you what I liked – while the plot is messy and the characters too numerous to follow, there are still some sparkling magical delights.

Jude Law, one of those breathtakingly gorgeous young actors who seemed rather put out by ageing, before eventually accepting it and then being rewarded with the extreme handsomeness of middle age, is now a delightfully avuncular Albus Dumbledore. An adored Hogwarts Defence Against The Dark Arts teacher, he’s also a man with some secrets, including his schooldays friendship with Grindelwald (presumably they were in love but it’s rather vague, with a few hints). He’s one of the movie’s gifts to us so make the most of him whenever he appears.

And if Jude Law isn’t enough to tempt you on his own, imagine a film with both Jude Law and a floating silver teapot which follows you around, a fresh brew always on offer.

Grindelwald certainly knows how to deal with the lack of decent housing in Paris – simply turn up with your wand and some empty coffins and voila, soon that delightful French apartment is yours, its inhabitants gone. Hogwarts, too, even putting Jude Law to one side for a minute (did I tell you Jude Law was in this?) is a joy, with early 20th century wizarding children and a young Professor McGonegall, a team of Quidditch players soaring into the sky in the distance.

Newt Scamander (Eddie Redmayne) is still a sweetly diffident presence. Backed into a corner that he can’t magic himself out of, he’s gently forced to go to France and find poor Credence Barebone before the boy’s sad story makes him an easily manipulated tool for Grindelwald. This time Newt’s brother Theseus (Callum Turner) is around too, the sensible older sibling, settling down to marry a fiancee he doesn’t truly know.

There are plenty of fantastic beasts. Like the human cast, many pop in entertainingly but fleetingly, then after graciously receiving our oohs and urghs, disappear. I loved the Kelpie, a Scottish sea creature that requires special handling as it whizzes Newt from the cavernous basement of his flat to the lochs of Scotland.

A half-menacing, half-cute Chinese dragon appears at just the right moments. The adorable Nifflers are back too. A little Niffler literally goes a long way, and like the phrase “fever dream” in a film review, should only be allowed out under strict supervision lest it run around getting into everything and causing untold damage.

In Paris, Credence (Ezra Miller, in a pathos-filled performance) is looking for his real mum, after the death of his cruel adoptive mother Mary Lou in Fantastic Beasts And Where To Find Them. It’s a slightly tangled web, his parentage and the parentage of various other characters too. Poor Credence goes from having no family to having too much, as stories of long ago unfold and his family tree blooms and dies and blooms again.

Miller is very good as the lost boy desperate for some kind of warm family structure to anchor him. Instead, Credence finds he’s the subject of a glittering rumour that he might be someone special in the wizarding world. It’s an enticing idea for a lost boy. How his sadness eventually both shapes him, and makes him easier to shape, is frightening.

The most interesting and most frustrating characters are Nagini (Claudia Kim) and Leta Lestrange (Zoe Kravitz).

Nagini’s deep friendship with Credence gives the film some emotional depth – theirs is a heartfelt tale of two lonely misfits – though again her story doesn’t really go anywhere at this point.

Leta has more to do. She’s intriguing and forlorn, drowning in guilt and regret, quivering under a carapace of culpability you know she’ll never let anyone through (I’ll admit I’m rather tired of this kind of set-up for women characters, the unnecessary self-flagellation and what it so often leads them to). Her doubled-edged comment to Newt that he’s a man who’s never met a monster he couldn’t love is heartbreakingly sad when you realise what she means.

The script tries to tie up its loose ends, as half the characters meet in a cemetery vault to answer everyone else’s questions, like an equal opportunities Agatha Christie denouement.

Grindelwald’s initial escape from New York is visually exciting and stunning, with jolting camera work. There are big set pieces with flames and oratory, and delightful little magical interludes, plus the continued world-building. But while individually these are enjoyable, they don’t fit together into a coherent story.

The movie also lacks menace and tension – there’s no sense of foreboding. Even some cute baby flashbacks designed to elicit our emotions do nothing much, and I say that as someone who’s never seen a screaming little monster in a lace bonnet I couldn’t love.

Watch the Fantastic Beasts: The Crimes Of Grindelwald trailer now: