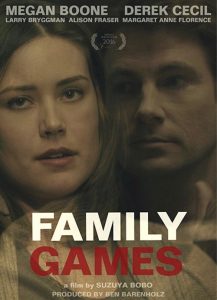 “Wouldn’t it be perfect if it rained” says Sloane to her boyfriend Barrett as a taxi takes them to her dad’s isolated woodland home before his remarriage the next day.

Barrett has the good grace to look uncomfortable over Sloane’s bitchiness. For her this trip is not about celebrating nuptials, putting a brave face on for her father’s happy day no matter how hard.

It’s a planned attempt to settle old scores. It’s possible underneath is a child screaming about her lost mother but if so Sloane (Megan Boone, The Blacklist) does a good job of hiding it beneath her carapace of slow-burn fury.

Barrett seems constantly nervous and out of step; an embarrassed +1.

What they’re not expecting is her dad Roan (Larry Bryggman) and soon-to-be stepmom Kathryn (Alison Fraser) to retaliate, though how much is deliberate on the part of the older couple and how much is their reflexive responses to the volley of accusations they have to face down isn’t clear at first.

This is a slow and sneaky-feeling film and I mean that in a good way. No one is as they seem and everyone is either on the attack or the defensive.

For the two women it’s verbal sparring and put downs, though Kathryn is the more subtle of the two.

Sloane quickly brings up old wrongs, accusing Kathryn (herself a widow) of stealing her dad as her mom lay dying in the same house. Kathryn offers to show her up to her room despite it being Sloane’s childhood home.

For the two men it’s a supposed buddy session shooting in the woods.

Barrett (Derek Cecil from House Of Cards, brilliantly uptight) is not a natural country boy, though he’s pleased with himself for shooting a quail, even though he’s then informed it’s out of season and he’s broken the law – one of several increasingly calculated digs from Roan aimed at making Barrett feel even more like an outsider (that quail seems to take an increasingly large and symbolic position within the fevered dynamics though I’m not entirely sure why).

This film certainly packs a punch. It’s only about 70 minutes, but in that time it explores family dynamics and their breakdown. Boone nails that mix of adult vengefulness combined with a retreat back to her childhood self once she’s home (don’t we all do this? I’m not sure my mother ever accepted I’d aged past 15 and I certainly didn’t disappoint when I visited).

Both Kathryn and Roan and earthy people, happy on their estate in the wood, shooting and hunting and fishing.

The subtle rage at what they are having to put up with in their own home combined with a sense that they’re the underdogs in the company of city folk is always there.

Fraser is particularly effective and increasingly scary. Kathryn – all bouncy curls, faded prettiness and a little girl lost voice – is one of those women who look like the height of their talents is cooking a giant turkey but who is actually self-sufficient to a terrifying degree with her own armoury of verbal weaponry.

Roan is surface-friendly but turns out to have developed his own protective instincts after a life dotted with scenarios where he had no control.

From what we usually see in films and in magazines, American weddings look to us this side of the pond to be a never ending rota of dinners, dinner rehearsals, and dinner rehearsal rehearsals; with everyone changing their outfits three times a day and spending $1000 on a present less they be social media shamed for being the US equivalent of a tightwad.

This is rather different. A second wedding for both Roan and Kathryn, it’s a low-key build up that should be all about coming together as a family. But as the British poet Philip Larkin said “they fuck you up your mum and dad”, a truism that sums up the whole film. In some ways it’s chickens (quail?) coming home to roost.

The “night before” dinner is a hugely enticing spread, but whereas usually simply the sight in a movie of a typical American sandwich sends me into salivating delirium, this left me cold, as everyone is so angry and so unhappy.

It’s followed by an excruciating, highly-charged evening. There’s not much to do in this neck of the literal woods though they try listening to old records, and German opera. Wagner’s Ring Cycle, or a little bit of it anyway. (The whole things runs to 17 hours which would at least keep everyone quiet until the wedding.)

Roan and Kathryn are a close-knit team, with barely a sliver of space between them for any knife to be wedged. But Kathryn is still blindsided by a final revelation.

Sloane and Barrett get drunk, and Sloane starts on her childhood cello, a perfect metaphor for their visit: one minute beautiful mournful notes fill the warm air; the next she’s scratching the bow across the strings.

There’s not a whole lot happening on the surface here, as tensions grows and never-forgotten slights bubble menacingly. And initially I wasn’t that bothered by their family traumas. Don’t we all have our own? There’s always a sense with films like this that the same themes are explored over and over.

Until, in this case, that final twist when family secrets can’t stay hidden any longer.

It was, I’ll admit, a total surprise and is certainly jolting. I’m not even going to hint at it (and let’s face it with such a short, sharp running time you won’t have to wait for very long for the big reveal).