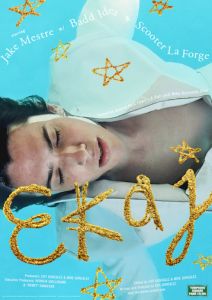 The relationship between the young Ekaj (Jake Mestre) and the older Mecca (Badd Idea) is central to writer-director Cati Gonzalez’s movie. It gives warmth and structure to this story about two young gay Puerto Rican men, struggling to survive in that harshest of environments, New York City.

But it’s also one that threatens to become unbalanced, as Mecca’s infectiously protective personality could easily take over. Not deliberately, but because Mecca – who is by turns (and sometimes all at once) thoughtful, funny, blunt, caring and driven – is such an engagingly human, and humanistic, presence.

Luckily as a performer Badd Idea knows to give co-star Mestre space, but I won’t deny I loved listening to his brutally honest, and often brutally funny, advice and takes on life.

This is a film that doesn’t spare us the unforgiving and painful details of lives lived at the edge: drugs, rape, AIDS, physical abuse, days on the streets.

And thank god Mecca is there, as it would be a depressing experience otherwise. His protectiveness seems to drive him, as he tries to build a carapace around Ekaj so the teenager can manage without his friend when he needs to. (Which creates its own paradox – befriend someone to help them, creating a situation where they develop genuine love and affection for you, then expect them to cope without you.)

Ekaj is a striking presence, and most resembles an androgynous 80s popstar: rock tees, leopard print, skinny jeans, long hair with a too-short fringe. Getting ready for a night out, he wants his friend’s cologne: “You’re confused. You wanna smell like a boy but you wanna look like a girl”, he’s told. He seems gender-fluid, and in every sense he’s a work in progress, gradually working out what and who he wants to be (and can be, in his circumstances).

His thoughts on why he’s misused so many drugs in the past are clear-sighted, but there’s an ethereal quality about him. He’s easily used, and at times is like a windblown leaf in a park. He’s also at heart a romantic, declaring he’d give up his non-existent career for love. it’s rather heartbreaking because you know he’s going to have to toughen up.

It’s easy to see why Mecca goes up to him on a park bench and befriends him; you’d feel guilty not making sure he’s ok. Though when they do meet, we’re not sure at first if Mecca is a force for good or an exploiter.

Mecca has a whole lot of life experience, much of it etched on his body. Ekaj meanwhile parades his own sense of self, as far as he can, to retain some sense of agency and autonomy: “if I’m going to sell myself I have to have… a sexual mental connection”.

Gonzalez’s film feels very like a documentary; in fact I had to check it wasn’t. There’s a natural realism to the way Mestre and Badd Idea deliver the dialogue, though that doesn’t always carry over to other characters, and that mix of acting styles that can be confusing.

Despite the subject matter, it’s a weirdly restful film in many ways. There’s a hypnotic repetition to their lives, that constant struggle on the hot streets to make money to buy food, or find somewhere to stay – and learning who you are (or aren’t) is often a repetitive process.

Mecca takes responsibility for Ekaj and never misses a chance to make money, whether it’s asking passers-by for cash or nonchalantly walking off with an unlocked racer bike. He’s an opportunistic person, but also a steady presence.

Ekaj doesn’t feel very disruptive as filmmaking; I didn’t feel I saw anything I hadn’t seen before. Having said that, the two men’s lives are engrossing and beautifully portrayed – this is certainly an impressive first feature from Gonzalez. Her characterisation is deft, and her lead actors very believable. At his best Mestre sparkles, that tangle of contradictions that we all go through but usually with a decent safety net. Badd Idea is a charismatic performer: dazzling but with great depth.

It’s interesting that Ekaj only mentions his mother once. We don’t see her, though we see his aggressive and homophobic father. Mecca seems to take an almost motherly interest in Ekaj – it reminded me of those wildlife programmes where the mother looks after her cubs while also preparing to send them out on their own into the wild.

Mecca’s responses can seem cruel (particularly after Ekaj is attacked), though within their lives they don’t really have any other option. His concern is genuine but has to be practical. There’s little room for emotion in their lives.

His commentary is sparse but wincingly funny, with no time for niceties. Trying to warn Ekaj off sex work by suggesting theft as a more appropriate alternative, he says: “cos stealing takes skills and escorting takes it up the ass.”

Theirs are lives lived a long way from mine, in every sense (I did have to Google “the devil’s lettuce”, which sounded like a salad on offer at a hipster satanist cafe). But the themes are universal – branching out to find out who you are, having someone to care for you, loneliness, abandonment.

There’s a very grounding sense of place in Ekaj, even though they’re often on the move. Though it’s striking when we get a glimpse of high-rise New York from an apartment window; it’s easiest to get a sense of where you are from above, with some distance.