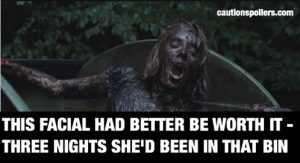 We really don’t know what to do with children, who once out of toddlerhood seem to be seen as either angelic victims or nasty feral thugs. In Eden Lake it’s the latter, where little terrors have grown up to terrorise.

It’s a film I’ve been both meaning to see and trying to avoid for nearly a decade now. Slasher films are my least favourite films. When I do watch them I often come out feeling incredibly dispirited as they’re either scarily believable or depressingly exploitative. I was thinking about it again last night then switched on the TV and there it was. Who can ignore that kind of gruesome serendipity? So now I can confidently say I have seen all of Eden Lake apart from the bits where I only saw my fingers. And it’s very, very good. But terrifying. (Also I found out I have Old Lady hands).

For a Brit, obviously a homegrown horror film can feel a bit too close for comfort especially for someone like me who goes camping. Having said that I camp with my two feral children so it’s quite possible people see us get our tent out, remember watching Eden Lake and run for the hills themselves.

American slasher films are distanced from us not just by geography but also by culture – we don’t have a tradition of summer camps, or sororities, or even the prom. So watching a US slasher film is like peering into the unknown. While watching Eden Lake is like viewing a mash up of British staples Five Go Camping and Lord of The Flies.

“At your first opportunity turn around” instructs Steve’s Kylie Minogue satnav as he and his sweet primary school teacher girlfriend finally reach Slapton Quarry, a beauty spot where they’re spending the weekend. And I have to say I was voicing much the same sentiment though in slightly more Anglo Saxon language. But no one ever listens to me so they carry on to the now-renamed Eden Lake. The idyllic spot is being gentrified with several new homes about to be built on the site (“who are they so afraid of?” voices Jenny on seeing the advertised gated community. “Everyone!” jokes Steve).

Camping on the shore of the lake they’re involved in a minor altercation with a group of yobbish kids on bikes led by the cocky and jeering Brett and nasty sidekick Paige, and their scary-looking dog. Despite this, Steve and Jenny stay and camp overnight. The next day their car tyre is burst and their food has been contaminated – soon after, a bag with Steve’s car keys and wallet disappears. They find the boys (and girl) in the woods and tackle them, and then it really goes downhill. What follows is an escalation from small scale irritations to murder, in a cat and mouse game of class but more than that, of age.

The film doesn’t hide much – it’s very violent with torture and worse. After the “worse” Jenny is sick at what she has just seen and I felt the same. Several times the adults put themselves in the wrong. And as the film progresses Jenny in particular quickly loses that sheen of 20-something middle class contentment. Covered in mud, scared, angry and injured, she doesn’t exactly turn into a kick-ass avenger but she does become almost animalistic. Steve descends into vulnerability, the trappings of manhood taken away as his horrendous ordeal continues.

The Eden Lake teens (really a group of kids with two psychopaths bullying the others) will look familiar to many. Who hasn’t thought “should I ask them to turn that bloody music down or will I get more than I bargained for?” I’ve often found that if I have a word with teenagers they tend to lose the bravado and apologise very politely, but then that’s partly because I subconsciously pick my battles. Plus of course some children want an adult to appear and give them those instant boundaries, that permission to say no to a bullying “friend”. If we should even talk to them: “My mum says I’m not allowed to talk to strangers” says Adam, the young boy they find collecting insects in the forest when they first arrive.

Often in horror films what strains credulity (apart from zombies and demons and maniacs) is people completely failing to run away at the first sign of trouble. But here it seems completely believable. Steve has that Alpha Male need not to let a bunch of kids get the better of him, that unwillingness to just take a hit on pride and walk away, combined with his genuine belief that someone needs to stand up to young thugs. (Jenny asks him to just leave it, first out of exasperation and then fear.)

The kids in Eden Lake are cleverly drawn (calling them kids rather than children immediately makes them seem somehow more culpable doesn’t it). They’re from a totally different background to Jenny’s quiet and well-behaved primary school class and you can see her belief in the goodness of children shattering. Brett and Paige have no moral compass and their psychopathy surely goes beyond neglectful parenting but the others do display varying levels of fear, enjoyment and empathy, often depending on who is around. Watching some of them being made to commit torture is heartrending, though not all of them need much encouragement.

Eden Lake is a very effective film but it’s also relentlessly painful. Oddly, the locations (idyllic lake; beautiful family-friendly forests complete with easy trails, map stations and rubbish bins; quite ordinary looking homes), mean there isn’t that sense of isolation you get in some films – but actually for the viewer that makes the events it depicts more terrifyingly close and believable.

It’s ironic that when we talk about childhood it is often in misty-eyed terms about playing in the nearby woods all day away from parents’ prying eyes, and that’s exactly what these children are doing. Maybe staying home with an iPad isn’t so bad after all?