You are here: Home / Film Reviews / Eaten By Lions 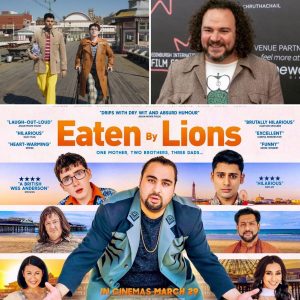 In Eaten By Lions the mum and dad/stepdad of brothers Pete (Jack Carroll) and Omar (Antonio Aakeel) suffer exactly that fate, and I won’t deny it’s a relief not to have to labour over a movie title’s meaning.

You could argue it’s also a metaphor for the brothers, faced as they are with racism and ableism (Pete uses a walking frame); though the boys’ drive and humour ensures that doesn’t happen.

That this fraternal relationship works so well is testament to Aakeel and Carroll’s extraordinary chemistry, and a darkly funny but heartfelt script.

Pete may be the source of most of the one-liners, but Omar is more than simply a foil for his brother’s bad-taste wit. And Pete’s recycling of the pity with which he’s showered as fuel for his gags and bad behaviour is brutally hilarious.

They need more than a sense of humour when Ken (Kevin Eldon) and Ellen (Vicki Pepperdine), Pete’s uncle and aunt, take in the boys years later after their gran dies. It’s an act of fake altruism designed to warm the cockles of the couple’s own hearts; but while they do everything they can for Pete, they’re barely civil and often racist towards Omar.

They’re awful to watch, though I loved Ken’s OCD coping mechanism, photographing electricity sockets to prove everything is really, truly switched off. (I was once a slave to checking, the frequency based on a random number multiplied by four. As soon as I got pregnant it stopped, which obviously doesn’t help Ken.)

Omar is forced to sleep in the cupboard under the stairs: “I’m waiting for the owl to come to tell me I’ve got into Hogwarts” he says sarcastically to a chortling Pete, who’s watching his brother from the stairlift that’s been installed for him.

Despite the favouritism, the boys are incredibly close. But soon Bradford’s answer to Privet Drive becomes too much for Omar, and he heads to Blackpool to find his father. Pete joins him, with Omar’s proviso that “you can come, but no stealing”.

Blackpool looks great fun, and is populated by a few very interesting people. Omar soon meets the candyfloss-haired Amy (Sarah Hoare), and her uncle Ray (Johnny Vegas), who grudgingly offers the boys a bed for a few nights in his fleapit B&B. (He’s very funny though some of the jokes about him are as dated as the clothes he lends them.)

For reasons of entertaining plot embellishment, the brothers lose their clothes, and are forced to wear what can be scrounged from Ray’s ancient lost property bag. Though frankly Omar is so handsome he looks like an i-D magazine model in the borrowed yellow trousers, stripy tank top and beige 70s-style leather jacket (is i-D still going? I’m really old and out of touch.)

Omar’s first meeting with his purported family is not easy, as the two boys sit on a sofa opposite uncles, aunts, children and grannies.

Pete attempts to lighten the atmosphere: “it’s a bit like Gremlins isn’t it, Ramadan, similar rules”. Businessman Malik, the man Omar has been told is his dad, denies everything; until his own gran undermines his claim that he’s never been to Rhyl, where Omar was conceived, by holding up an I Heart Rhyl mug.

But Malik (Nitin Ganatra) has a brother, Irfan (Asim Chaudhry), who was with him in Rhyl. Irfan too is a businessman, of sorts. He runs a gift shop, whose top seller is one of those pens with a woman on it which you turn upside down to reveal she’s wearing a burka. (Irfan is bumptious, self-aggrandising, and selfish, though he is also, as Chaudhry gradually reveals, painfully aware of his own shortcomings.)

The most interesting member of Omar’s potential new family is Parveen (Natalie Davies), Malik’s daughter. She’s hilarious, staying just the right side of predatory in her pursuit of the hapless Pete, who’s finally met his match.

Parveen eventually ditches her drab get-up for a leopard print coat, driving off with Pete in her dad’s treasured roller, determined they complete their cinematic love story by driving into the sea and dying together. It’s only Pete’s desperate suggestion that they go into Blackpool for some looting that saves them.

Eaten By Lions is very, very funny, though it sometimes feels like several vignettes, as characters do their turn then disappear. That’s not to say their turns aren’t hilarious – Tom Binns’ terrible tarot card reader is a cold-reading delight, and probably closer to reality than we’d like to admit.

Some scenes are clearly signposted, and occasionally don’t really work. A naked Pete hiding his glory behind a fan (the air-circulating kind not the autograph-hunting kind) while Omar’s family hover menacingly doesn’t fizz as much as it should.

I’m probably projecting, but I like to think director Jason Wingard casts an admiring nod to Jaws – from Amy’s job feeding sharks at Sea Planet, to her moonlit stroll with Omar when she runs off to paddle, which I thought was going to be Blackpool’s Chrissie moment. Or that at the very least she’d cut her foot on a can of Stella and bleed to death.

Though to be fair Blackpool is remarkably clean and, apart from Ray’s B&B, non-seedy. Modern anti-littering by-laws, and Eaten By Lions‘ cinematographer Matt North, mean the town and the seaside look amazing on screen; particularly as the custard yellow Rolls Royce drives across the sands to the sparkly sea, or as Omar stands on the promenade at night, between two street-lights designed to look like stylised palm trees but with several lightbulbs missing.

The affection and love between Omar and Pete is the thread that holds the film together. Their relationship is wittily acerbic, that humour both a way of lightening their lives and a protective mechanism. It’s also at times one-sided, something Pete is forced to face up to: it’s only when Omar is received into the collective bosom of his warm, new-old family that Pete has an inkling of how his brother must have felt in the past.

This is a sunny-natured film that manages to delve quite deeply into darker themes. But at its heart it’s about the meaning of family, and belonging; of finding a fit that may be imperfect and a little raw, but which comes from a place of warmth and love. And if that last sentence sounds a bit vomit-worthy, just wait til you see the fabulous Parveen’s particularly awesome post-party boak.

Buy the DVD from amazon uk

buy / rent Eaten By Lions on VOD from amazon UK

Eaten By Lions is based on director Jason Wingard’s earlier short film Going To Mecca, which you can watch on Vimeo here.

Watch the Eaten by Lions trailer below, and check out my interview with director Jason Wingard