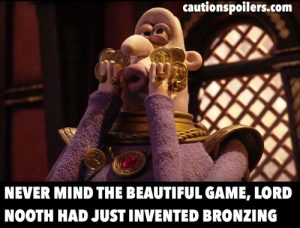 It’s not often we get a movie that explains two of the most seismic and important events in all of history within the first few minutes.

But Early Man, the latest film from Aardman Animation, does just that; starting with the extinction of the dinosaurs and morphing swiftly into the invention of the Beautiful Game.

It turns out that it was indeed a meteorite that killed off those giant lizards, but that same lump of boiling rock also led to the invention of football, as the red hot sphere was thrown and kicked from prehistoric man to prehistoric woman, all of them desperate to avoid third degree burns.

Fittingly, we also find out in the first few frames that all this took place “near Manchester”.

Yes this is British football not the American kind, the difference being we are hard as nails and need only a numbered polyester shirt and a mullet haircut to protect us rather than pads, helmets and face guards. (Nowadays, anyway – Early Man had only animal skins and a sense of their own future greatness.)

This is amiable fun although there’s not much of a story. The football references were easily understandable even to me, though they are, of course, only the ones I understood. I’ve no idea how many footie jokes actually sailed over my head in the manner of Stone Age footballers Asbo and Megma’s practice shots. (Plus I had no idea why Goona was called Goona until an Arsenal fan explained it to me later.)

Fast forward from that meteorite, and the descendants of those first footballers are living in a beautiful green valley, filling their time hunting rabbits and laughing at the very suggestion they should up their game and go after a woolly mammoth instead. (It’s possible that their rabbit-heavy diet is the reason they haven’t evolved – “rabbit starvation”, suffered by some hunters, is caused by a diet of only rabbit meat, which is simply too lean to survive on. Don’t say you never learn anything from my reviews.)

But the rest of the world has evolved, right into the Bronze Age in fact. And the metal-draped leader of a neighbouring settlement, Lord Nooth, is soon menacing the clever and progressive young Dug (Eddie Redmayne), and his slightly less forward-thinking Stone Age compatriots including Chief Bobnar (Timothy Spall), Treebor (Richard Ayoade), Asbo (Johnny Vegas), and Magma (Selina Griffiths), in a bid to take over their lush valley home.

Lord Nooth (Tom Hiddleston) is an avaricious giant in thrall to two things: bronze, and footie. He is determined that the valley be theirs, but after Dug challenges him to a football match to decide ownership once and for all, he can’t say no.

And how can he lose? Lord Nooth’s team – Real Bronzio – not only have their own enormous stadium but also several experienced players, their long, luscious locks presumably helped by a rabbit-free diet rich in Ginsters pasties and hot, sweet tea.

Unfortunately for Dug none of his tribe know anything about football, and he has to teach them the rules of the game. (No easy task – people have been trying to explain the offside rule to me for about 30 years now. Which is even more embarrassing as I’m from football-mad Newcastle, and it’ll come as no surprise that they eventually kicked me out for wearing tights when the indoor temperature had barely dropped below freezing).

Their first attempts are dreadful (it turns out you can be too good at kicking). Luckily Dug has two things in his arsenal: Bronze Ager Goona (Maisie Williams); and cave paintings of their ancestors playing the beautiful game – once Dug realises that’s what they’re doing. Maybe epigenetics means that his motley band of brothers and sisters can find within themselves the skills and self-belief to win?

Soon the scene is set for a football showdown in front of a packed stadium, including the Bronze Age queen, who looks like Theresa May but popular. Luckily for Dug, while Nooth’s team of players are skilled and, crucially, know the rules (and how to break them), they aren’t necessarily team players.

The Bronze Age queen is called Queen Oofeefa, which I loved, though sadly there isn’t an equivalent Queen Of The Stone Age ruling over Dug’s clan. Instead they have Chief Bobnar, a white haired old gent who turns out to be “nearly 32”, a line which depressed me more than finding out I’m officially the oldest woman on Twitter.

The match itself has season suspensions that are to be taken literally, and football commentators Brian and Bryan admiringly pointing out that Gonad the Gaul is so good “no one gets past his tackle!” The action replays involving a puppet theatre, descending into chaos as Mr Punch turns up with a string of sausages, are a joy.

It’s all beautifully executed (the models not the characters – this is a kids’ film), and there is something delightfully old school about the animation while still looking fresh. Some backdrops clearly aren’t built out of plasticine or indeed pleistocene (Nick Park’s joke, not mine), but nothing looks out of place. The Stone Age characters are a delight, and Dug is an endearing, engaging lead.

Early Man is a paean to a rather misty-eyed, mythical British past where people lived simply, women players weren’t excluded from top-flight footie and we all had terrible teeth, rather than just most of us.

Yet somehow I felt I’d seen this kind of thing before. The jokes are good but not rapid-fire, and I’m not sure how much children will understand; the verbal humour seems aimed more at adults. This is best watched by a football-mad child with a football-mad parent.

I can’t end this review, though, without mentioning Dug’s pet boar Hognob (Nick Park). He takes over as goalie, and standing in his super high-waisted baggy white shorts, his body covered in gingery bristles, he most resembles a slightly-less-prehistoric-than-the-original John McCririck. All that and he’d probably make 1000 delicious bacon sandwiches too.

While I’m not convinced by the Early Man timeline, it’s refreshingly realistic about the lack of dental treatment available to fix Dug’s overbite. There’s no Hollywood perfection here in the manner of Raquel Welch in One Million Years BC.

Historically it is inaccurate though. Surely everyone knows footie was invented on the banks of the River Tyne by the Toon Army?

available on vod, blu-ray and dvd from amazon uk

available from amazon.com on dvd and blu-ray

available from amazon.com on vod