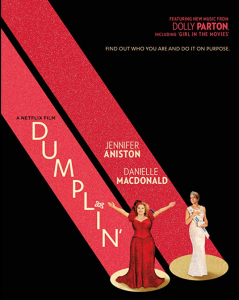 Willowdean Dickson is a plus-size teenager coming of age in a world of vibrant retro colors and quietly crushing slim privilege. With a band of friends — of varying looks, politics, and life goals — she embarks on a small-town, life-size protest that will likely resonate with anyone who has been too plain for the patriarchy and too cute for the revolution. (I suspect that most women and girls have been both.)

When we meet her, Willowdean (Danielle Macdonald) is trying to figure out how to live in this world without her beloved Aunt Lucy, who died several months earlier. Aunt Lucy effectively raised Willowdean, also introducing her first to Dolly Parton — who supplies much of the movie’s soundtrack — then to the new kid neighbor Ellen (Odeya Rush). These two sustain Willowdean when nothing else can.

Whatever confidence Willowdean possesses was gifted from Aunt Lucy. Yet it’s not enough, and how could it be? The slimpretty privilege of her environment is embodied, literally, by her own mother, Rosie (Jennifer Aniston), formerly a local beauty queen who has given her daughter the mortifying nickname that becomes this movie’s title (Willowdean’s friends call her Will). Not surprisingly, Will can’t trust her mother to get her, to value or even venture into a world beyond beauty, or to miss Aunt Lucy like she does.

Their town has the feel of the ‘50s. It’s all bright teals, pinks, mustard, and navy, a colorful, idealized working community, not to mention the Miss Teen Bluebonnet Pageant, which Rosie oversees. It is Rosie’s mission to defend the pageant from the banality of modernity (“City pageants are getting more generic; there’s nothing Texas about them”). Initially, Willowdean’s only role in the pageant is transporting her mother to related events — Rosie flat and stiff along the back seat of the car so as not to crease her gown, Will and Ellen lifting her out, feet first like a corpse, a brief visual thesis on sacrificing life to beauty. (Is this how best actress nominees arrive at the Oscars?)

Despite some teasing about her size, Will is hardly a social reject. In her locker at work she finds a Magic 8 Ball, a gift from the cute new guy in town, Bo. Will can’t believe Bo is sincerely interested in her, and a worried audience may similarly wonder if our heroine is being set up for public shaming. Willowdean at least accepts the Magic 8 Ball, consulting it about important life decisions — such as whether to enter the beauty pageant as a homage to Aunt Lucy and a fuck you to her mother. The Magic 8 Ball says go for it. Poor Rosie braces for humiliation, suspecting, correctly, that Willowdean’s goal is to tear her playhouse down.

And Will isn’t an army of one. Her unconventional pageant participants include Millie (Maddie Baillio), another heavyset girl, though Millie doesn’t understand that they’re doing this ironically. Millie’s lesbian emo friend Hannah (Bex Taylor-Klaus) explains that their role is a “revolt against the aggressive, heterosexual patriarchy unnecessarily internalized by the female psyche.” Ellen is in on it too, and though she claims to embrace the politics of pageant-crashing (“kind of like a protest in heels”), Will is dubious; Ellen’s cute white girl privilege may disqualify her from the revolution. The tensions show in the teens’ uneven engagement in pageant boot camp (running around town in pink sweats, learning the dance moves for the opening number) and the early talent category auditions. Thus these young women grapple with the time-honored struggle of defining feminism and alliance.

Who or what can orient the girls and take them to a teaching moment everyone can embrace — a pageant victory (however we define it) that warms #allthehearts? Aunt Lucy, you might guess, and it’s hardly a spoiler to say yes, you are correct. As Willowdean searches through her aunt’s possessions, which heartless Rosie has boxed up for donation, she finds the clue that leads her posse of wise misfits to another posse of wise misfits: a bunch of drag queens performing Dolly Parton hits. The girls are particularly wowed by Lee (Harold Perrineau), who helps them channel the spirit of Aunt Lucy (“Figure out who you are and do it on purpose”).

The drag queens are the weakest link in the story. Director Anne Fletcher and screenplay writer Kristin Hahn (and perhaps Julie Murphy, the author of the novel this is based on) needed to lose more sleep over how to avoid stereotyping characters whose self-identity is a stereotype. This and other elements of the story are formulaic (“thin,” said my sister, no pun intended); both the status quo and the rebels’ goals are conventional. Yet the delivery is mostly charming, and when I wasn’t looking to find fault, the movie’s freshness somehow defied its retro framing. The film never suggests that Will’s value is related to men’s approval. In fact, there is hardly a man to be found. The characters are more three-dimensional (again, NPI) than I have come to expect from such stories. Willowdean is a likeable protagonist — opinionated, loyal, witty, pragmatic. She is impulsive enough to get in trouble for the way she defends another plus-size student from the school bully, but resistant to being typecast (“I’m not the Joan of Arc of fat girls”).

You can imagine the actors and crew having fun with this film — a rare relief for a cast of women delivering a key message about womanhood, all in a day’s work, with paychecks. Danielle Macdonald as Will is particularly winning. Jennifer Aniston sweetly satirizes the world over which she presides in real life as well as this movie. And while I can’t help wishing Aniston would go forward in life and Hollywood sixty pounds heavier as a gender politics protest, I also understand why she can’t — yes, can’t. The playhouse is solid and barely flexes in a gale. It will take more than a breath of fresh air at a pageant.

Dumplin’ is available on Netflix now.