You are here: Home / Film Reviews / Dr Strangelove or: How I Learned To Stop Worrying And Love The Bomb 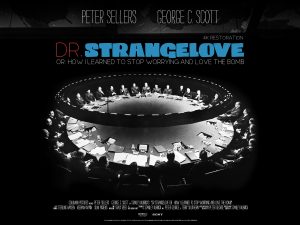 *** Check out my interview with Matt Wells, director of Stanley Kubrick Considers The Bomb, the short film showing with the new 4k Dr Strangelove ***

It shows how easily I slipped back into my 1980s-era Armageddon obsession when – on realising Stanley Kubrick’s classic Dr Strangelove is 95 minutes long – I decided to work out how many four-minute warnings could fit into it (23.75, as it happens).

While the film would be less frightening if it were longer, as the events it portrays move inexorably to mutually assured destruction, it would be delaying the inevitable.

This is a perfectly-paced but emotionally exhausting watch, so thank god for the humour.

The terrifying realities of nuclear protocols are more palatable, and our understanding of what they mean more effective, if we’re laughing – as what’s most frightening is how true Stanley Kubrick’s film is, beneath the farce.

Kubrick was privy to some heart-stopping (but sadly not arms race-stopping) information about nuclear weapons when he was planning Dr Strangelove.

The film was released in 1964, around 15 months after the Cuban Missile Crisis, an international incident usually considered to be the nearest we’ve come to nuclear annihilation.

Matt Wells’ short introductory film Stanley Kubrick Considers The Bomb, which accompanies this new 4k restoration, provides much-needed context 55 years on; context on the time it was released, and on Kubrick’s feelings regarding the nuclear threat. Featuring author Eric Schlosser, Kubrick’s daughter Katharina Kubrick, and his brother-in-law Jan Harlan, it points out the frightening truths behind Dr Strangelove, as well as our refusal to really admit what it could mean. “People don’t react to abstractions” said Kubrick. Harlan points out that “All his films are connected. He looked at our frailty, at our vanity, the fact that we have a tendency to self-destruct”.

It’s a necessary introduction for people watching Dr Strangelove who don’t remember the background dread, even if those who do remember it didn’t want to face it. I was a teenager in the 1980s, and while the UK government did try to convince us we could unscrew a door and sit under it for two weeks, we all knew that was ridiculous.

That constant fear was something I was glad to leave behind, even if the risk today isn’t much less. Now other emergencies have superseded it: climate change, austerity, looking for my son’s shoes at 8.30 on a Monday morning.

Laid bare in Dr Strangelove is a map showing the combination of nuclear policies designed to prevent all-out war, intersecting with the weakest link: us, whether well-meaning but short-sighted, or simply insane.

The USAF bomber crew, on a regular mission, are stunned when the code they’re sent turns out to be genuine. But they’re trained for this and the pilot Major Kong (Slim Pickens) even puts on his cowboy hat and gives a patriotic pep talk as they change course to bomb Russia.

The code has come from Brigadier General Ripper (Sterling Hayden), a lone madman who has previously been granted permission to launch nuclear missiles. He’s obsessed with the purity of our bodily fluids, one more sex gag in a film full of phallic imagery (what is a nuclear bomb but a huge “fuck you”?).

His second in command is Group Captain Mandrake (Peter Sellers, in one of three key roles he plays in the movie), seconded from the RAF. Urbane and bemused, “we don’t want to start a nuclear war unless we really have to” he reminds Ripper with classic understatement.

It falls to General Turgidson (George C Scott), to inform President Merkin Muffley (Sellers) and the War Room what has happened and how it was even possible. He’s surprised at Muffley’s surprise.

President Muffley’s dawning realisation is both funny and terrifying, especially when he’s told he signed all the protocols allowing other people to launch missiles, protective measures to allow retaliation in case the Russians sneaked up and killed him.

As he finds each escape route cut off, the main road towards nuclear destruction gets ever wider and clearer – and then it turns out you can’t rely on the Russians to act with restraint either.

Their Domesday Machine, designed to kill all life on earth, will trigger automatically if the USSR is attacked; it was designed to be the ultimate deterrent, if only the Americans had known about it.

Awkwardness and incompetence litters every human interaction – even the personal phone conversation between Muffley and his USSR counterpart descends into farce.

Still the Russians weren’t all bad. According to Ripper, it’s them I have to thank for my fabulous teeth, thanks to an evil plot to control us by adding fluoride to the water.

The humour is in the situations and also the dialogue, farce juxtaposed with poignancy: revealing how this war will be unlike any other, a point lost on many even in the military. Mandrake bemoans the excellence of Japanese camera construction after talking about his time as a tortured POW; the bomber crew unpack their emergency rations should they have to bail out over enemy territory. Rubles, gold, oodles of chewing gum, stockings, lipstick and condoms – as Major Kong points out, perfect for a weekend in Vegas.

Dr Strangelove himself (Sellers), director of weapons research, tries to hide his love of Hitler from President Muffley until it’s no longer necessary; many of the generals want to defeat the USSR once and for all.

Little visual jokes are dotted around. “Nuclear warhead handle with care” is written on a bomb; General Turgidson sits in the War Room, an A4 folder in front of him labelled “ World Targets In Megadeaths”. Over-the-top scenes (Ripper machine-gunning American soldiers trying to get into the sealed-off airbase) are funny but uneasy, as the film reveals that while details may be farcical the protocols that led to them are far too real.

Peter Sellers is extraordinary, his three characters all so different while driving the comedy and the terror in different ways: Group Captain Mandrake, out of change while trying to call the US President from a payphone, constantly recalibrating his ideas of what is normal so he can continue to try to stop the madness; US President Merkin Muffley, utterly unprepared for the realities of what seemed a reasonable nuclear strategy; and Dr Strangelove himself, the wheelchair-using fascist brought to the US for his scientific knowledge.

I’d like to say Dr Strangelove’s arm, which he has to hold down to stop it making Heil Hitler salutes, and which also tries to strangle him, is – as an example of the left hand not knowing what the right hand is doing – a metaphor for the events of the movie.

Though actually the mad German scientist knows exactly what he wants, it’s just he finally has a chance to admit it.

My interview with Matt Wells, director of Stanley Kubrick Considers The Bomb, the short film showing with the new 4k Dr Strangelove