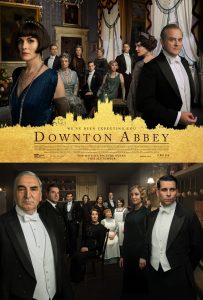 Sumptuous though the film is to look at, Julian Fellowes’ script is also painfully, unwittingly honest about the society it promotes: that the elite will always make the minimum adjustments necessary as society evolves in order to maintain their privilege, whilst looking as if they care.

I’m going to include spoilers but as (a) every plot detail is signalled a mile off and (b) nothing much of importance happens, it shouldn’t cause you too many problems – unless you genuinely don’t want to know who vandalised the Downtown Abbey boiler because their fiancée was making eyes at the plumber* (to be fair, the plumber is hotter than the furnace heating Downton’s water).

I saw Downton on the weekday morning it was released in the UK, in a nearly-full screening. The audience certainly seemed involved and invested: laughing at the servants’ jokes at the expense of those “upstairs”, and tutting loudly at the bullying, cold behaviour of Lord Lascelles to his wife Princess Mary and their adorable children. There’s a market for this movie, though at two hours it is too long; the final 20 minutes are unnecessary, and it overstays its welcome more than primogeniture itself.

I haven’t seen the TV series, though Fellowes does an excellent job explaining characters and back stories without it ever feeling exposition-heavy.

It looks stunning. The sun in the morning makes the grand house almost glow warm against the sky. The soft furnishings are gorgeously rich, and the aristocratic ladies’ evening outfits sumptuous confections of satin, sequins and creamy lace, whether on the Edwardian old guard or the younger generations with their bobs and headbands. (Daywear is often elegant but dreary, with everyone looking as if they’ve been interrupted by Miss Marple while gardening and are about to be questioned about a murder at the vicarage.)

The main focus is that King George V (Simon Jones) and Queen Mary (Geraldine James) are coming to stay for one night; an event which results in a battle of wills between Downton’s staff and the haughty servants accompanying the Royals.

There’s a clumsy sub-plot involving Lord Grantham’s son-in-law Tom Branson (Allen Leech), resulting in a particularly dull attempted assassination of the King, which plays out like an excruciatingly slow and tension-free episode of a Sunday night period drama from the early 1980s. Though really, what’s a spot of would-be regicide when there are sauces to be made and candlesticks to be polished?

No, the real action is a semi-slapstick situation whereby the servants stage a coup against the incoming royal staff, including the Page Of The Backstairs (David Haig), French chef Monsieur Courbet, the housekeeper and various footmen – who prove once and for all that servants are more liable to pull rank that the posh folk upstairs. Though there’s at least one anti-monarchist in the kitchen, under-cook Daisy (a terrific Sophie McShera).

Also in the house are the boiler vandal, a thief, a ladies’ maid who may or may not have been born on the wrong side of the bedclothes, and a ball dress delivered for Edith (Laura Carmichael) that’s several sizes too large – so, you know, maybe take a friend if you’re worried it’ll all be too much.

The Downton life may look gilded, but that gilt is starting to tarnish. The world is changing, though it’ll be a boring place without those vicious quips from Dowager Duchess Violet (Maggie Smith, need I tell you how fantastic she is?), and the quick-witted responses from Isobel, Baroness Merton (ditto Penelope Wilton?), when those two finally depart for the over-stuffed drawing room in the sky.

Grantham’s daughter Lady Mary (an excellent Michelle Dockery), whom I presume is the family conscience in the TV series, wonders if they should even bother to keep the house on. Lady Maud Bagshawe (Imelda Staunton) attracts the wrath of Violet by deciding to leave her fortune to her maid rather than to her nearest relative Lord Grantham. Lady Edith (Laura Carmichael) is bored with aristocratic life, having given up the job she loved. And while the legalisation of homosexuality is still decades in the future, Downton’s butler Thomas Barrow (Robert James-Collier) at least finds an underground scene he can feel part of, even if his first experience of it nearly ends in disaster.

But with many of these changes, they’re still preserving the status quo. Mary suggests moving to a smaller manor house to live  – ahem – like normal people. Maud’s maid is not really a servant but her daughter. Princess Mary decides to stay in her miserable marriage because of her loyalty to the Crown. One gets the impression that Lord Grantham tries to dissuade his mother from making a fuss about the lost inheritance more because he considers it unbecoming than because he sees the backwardness of her position.

The movie is a fascinating study of those at the top of the pole, and how the waves of change are mere ripples by the time they get to them, even if it feels like a tsunami. They even had me sympathising with them, for the first hour anyway.

The humour is gentle rather than side-splitting, apart from Violet’s scathing put-downs and a fabulous gag at the end regarding the Downton thief which brilliantly references Queen Mary’s real-life habit of collecting other people’s things. (If she came to stay and expressed a liking for something of yours you were expected to give to to her, which sums up Britain’s attitude to its Empire.)

The cast is to die for, and includes many well-known British actors I usually get mixed up (sorry, Penelope Wilton and Phyllis Logan / Jim Carter and David Haigh) which left me studying the immense IMDB cast list in great detail afterwards. (The character posters are below, including their long-winded titles, so if you’re not familiar with the TV show you can check out who’s who in Who’s Who.)

Is Downton Abbey worth the (day) trip? If you loved the TV series, and are invested in the Crawley family and their employees, this is a pleasant if lengthy diversion. If you’re a republican (the British not the American kind) you’ll probably find yourself snorting popcorn out of your nose, and that’s not very ladylike now, is it.

Watch the trailer and scroll down for character posters: