You are here: Home / Film Reviews / Diary Of A Wimpy Kid: The Long Haul 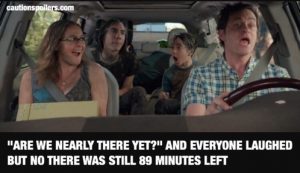 It’s only fair that I point out that while I wasn’t particularly impressed with this film, my 7 year old – surely the movie’s core market – adored it and insists it deserves five stars. And for me one of the most enjoyable aspects was watching him collapsing into hysterics at every fart joke, toilet scene and nose-picking incident.

That title though. The Long Haul is one that you can see writers coming up with, fingers crossed that the film will be so great it won’t just become a lazily easy way to start to a critical review. So, sorry but yes, it is.

I often end up writing in my reviews that it’s all about the journey not the destination, and that’s certainly true here. The whole film is a literal journey, a long, accident-prone one where the slapstick is so overwhelming we’re left screaming for a punchline even if the punchline is a defecating piglet. This slapstick is often unrelated to the plot and gets more and more extreme while we wait for the piglet’s digestive system to do its thing.

Click here for The Diary Of A Wimpy Kid: The Long Haul 1 minute video review

At a trip to a hideous family-friendly restaurant, popular only because it’s all-you-can-eat (oh how I understood Dad’s admonition to his family to make sure they do), 12 year old Greg Heffley (Jason Drucker) ends up in the play area ballpit looking for his little brother Manny, but when he pulls his hand out of the multicoloured plastic balls a diaper is stuck to it. As he shrieks in horror the other patrons video his reactions and it soon goes viral on social media as Diaper Hands, even being turned into a meme. Desperate for people to forget this eternal moment of horror, Greg comes up with a rather unlikely plan to go to a video games convention in Indianapolis, near-ish to his great grandma Meemaw’s upcoming 90th birthday party, and hopefully meet his youtube hero Mac Digby and star in one of his videos. He’s praying that such an appearance will mean everyone forgets his viral shame.

Greg plans his scheme after looking at a map of where Meemaw lives and noticing that the convention is only 2 inches away from the party. “I don’t think that’s how maps work” says his friend Rowley (Owen Asztalos) but Greg is adamant.

Meanwhile mom Susan (Alicia Silverstone, trying not to look too pretty) is also in planning mode and is determined that this will be a family-friendly road trip with some old-fashioned family fun along the way. For Susan it’s only family-friendly if family-friendly means no electronic devices and having to, you know, talk to each other, which is not family-friendly by anyone else’s definitions. “All she cares about is family time” moans Greg, and though he loves his family he’d rather they all lived apart.

Their packing is very realistic if you have children and are at that stage of surrender where you don’t even try and sort through what everyone wants to take, you just chuck it all into the car and consider leaving the kids behind as there’s no room for them in there along with the play-table and the tennis racquets. In the end they decide to take the boat for storage and attach it to the back of the car.

And while Susan is desperate for a family trip where they can chat, sing and bond, Dad Frank (Tom Everett Scott) has not told his office that he’s on holiday or told Susan that he’s officially still at work, so he has to take calls in secret. The two older boys are just desperate to get on their confiscated phones.

After a first night at a hideous motel complete with crunchy-underfoot roommates, and a run-in between Greg and a stereotypically trashy family which turns into a rather unbelievable subplot which could have been solved by Greg wearing a hat, they stop off at a country fair. It’s complete with a dungaree-wearing, banjo-playing band, fairground rides and “deep fried butter on a stick”.  At the fair little brother Manny (Wyatt and Dylan Walters) wins a piglet, and Greg inadvertently insult the locals (“we don’t live on farms, we’re normal people” he announces).

There are then more horrible motels and disastrous legs of the journey, and run-ins with Stereotypically Trashy Family, plus Greg’s scheming to get them ever closer to the gaming convention.

The characterisations are really too over the top to work. Dad is blandly nice but completely ineffectual. Mom is a nag. Rodrick (Charlie Wright) the 16 year old big brother is just too dumb and too nasty at times, though he does get all the best lines. Of the pet piglet he says “I think it’s great we have a pig as now we can get bacon from it every morning!”, and when he and Greg are looking at how to get from a motel to the convention centre he states that “we use Uber” as it’s completely free. How do they make a profit asks Greg: “I don’t know, I’m not a businesswoman!” is Rodrick’s rather brilliant reply. He also tries to cook a pizza in a mini safe for which I will always love him.

Greg gets one or two corkers. Meemaw’s brother was a soldier and when trying to get the family to make a last push to get to the party Greg points out that if their great great uncle had given up so easily America wouldn’t have “defeated the British in World War 2”.

The best character is Manny, who is about 3 and sits in his seat in the back of the car mostly asleep, though whenever he does wake up seems to be most pivotal to the plot and the story’s outcome.

Of course the journey isn’t just the actual journey but their emotional connection as a family as they endure disaster after disaster. The message is clunky though, and the delivery even more so (though I liked the irony of the old fashioned slapstick film about a modern family where the mom just wants an old fashioned trip, with mobile phones and viral videos just current props for a style of family film that has been around for donkey’s years).

Having said that it’s not terrible – I definitely laughed a few times – and it’s a film that gets better as they near their destination, partly as the slapstick has more of a purpose but also because I’d just given in to it by then. And their eventual arrival at Meemaw’s party is rather a joy, if very predictable.

But like I said, my son adored it and though I’d be lying if I said he was known for his critical faculties, I think it’s important that he gets his say. And his say is that the best bit is when Rodrick is filming Greg meeting his video gaming idol but accidentally has the phone camera on selfie mode and instead records himself picking his nose. Actually that was one of my favourite bits too.