You are here: Home / Film Reviews / Death Of Stalin 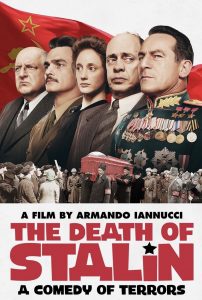 It’s amazing any decisions get made at all, both before and after Stalin’s death, as everyone is so paralysed with fear. The consequences of saying the wrong thing which they were previously so convinced was the right thing are terrifying. Being in the Soviet Politburo does sound a lot like being on Twitter.

Well, most people are paralysed with fear. Perhaps not Jason Isaacs’ Yorkshire-accented General Zhukov, but then the whole Russian Army does have his back.

In fact he remains extraordinarily buoyant throughout the tumultuous ups and downs of the period following Stalin’s death, as everyone else is quaking in their boots: “Everybody happy? Proper dead?” he asks, cheerfully, after he’s just dispatched someone.

Death Of Stalin has a very funny set-up, though for the first half it’s more humorously panic-stricken than joke-ridden, and once or twice it feels a little flat.

But the second half is extraordinarily good; an uproarious riot of farce and one liners as this brutal satire moves inexorably to its rather gruesome conclusion, something not unrelated to the arrival of General Zhukov. Even in a film crammed with razor sharp performances, Isaacs steals the show. His general is hard as nails, and a man who gets things done (“I fucked Germany. I think I can take on a flesh lump in a waistcoat” he says about taking down Beria). He’s afraid of no one, and is easily the hottest thing about the Cold War.

Jason Isaacs, if you ever read this I hope that last paragraph makes up for the fact that when I first saw the posters I was convinced you were Jon Hamm.

The death Zhukov is referring to isn’t Stalin’s, as Zhukov doesn’t appear until about halfway through the film, and though Stalin does take an inordinately long time to die, he is most definitely dead by the time the general turns up.

And there’s not a moment to lose. “How can you run and plot at the same time” Khrushchev is asked as he races through a forest, all the time planning what to do next as everyone jostles for position without wanting to actually stick their necks out less they be, in one way or another, detached from their bodies.

No one is safe, and while that’s been the case for years, and while people seemed to want Stalin both to die and to live forever, such was his cult of personality, now it’s actually happened it’s a threat as much as an opportunity. Change is often even more terrifying than a dangerous status quo.

No one wants to be the person choosing the doctor to come and treat the initially comatose Stalin, a choice made even harder since all the good doctors have been rounded up and killed or sent to the gulags.

Unsurprisingly none of the doctors want to be the doctor either. They eventually find their first doddery one in a Moscow park, and the scene where he tries to run away, a dog almost as old as him on a lead by his side, looks like a flash-forward to John Wick: Chapter 97.

Once Stalin is gone, the purge of his homes and employees is fast and ruthless. But now, what to do? Paranoia and vodka runs in these men’s veins, just like their late leader’s.

Malenkov (Jeffrey Tambor, looking like a cross between Wednesday Addams and Gary Numan) is deputy and so becomes General Secretary of the Communist Party, which means leader of the USSR. But he’s that volatile mix of weakness and pride, with a backbone so weak it’s not surprising he has to wear a corset under those bizarre outfits.

Khrushchev (Steve Buscemi) is slippery but tough, used to the ups and downs of political life. But even he gets the jitters and after an evening with Stalin goes home and get his wife to write down a list of everything he spoke or joked about, so the next morning he can re-read and know what he’s dealing with. Has he said something that sounds innocuous but could get him killed?

He also has a hitherto unseen flair for decoration. Security chief Beria forces him to arrange Stalin’s lying in state, flower arrangements and ruching included. When the semi-open casket is carried out, only Stalin’s head visible among a sea of red crepe paper frills, it most resembles a giant communist pinata.

Director Armando Iannucci’s decision to have actors using random accents (or their own) is a stroke of genius. Usually we get Russian-accented English or non-specific Eastern European English; occasionally in Russian with subtitles. Often neither of these options manages to sound authentic while being accessible. The mix of accents in Death Of Stalin adds to the farcical humour, and ties into easily recognisable archetypes.

The sense of permanent anxiety that one might have inadvertently signed one’s own death warrant is palpable, along with the understanding that these men have made a choice to take the risks on the off chance that they might one day be the puppet master.

Simon Russell Beale is terrifying as the psychopathic Beria – bumptious and outwardly friendly, then switching in a millisecond to menacing and murderous, and thoroughly enjoying the terror of his colleagues, who know that he is first among equals now. Twisting words and changing expectations so other men say something innocuously incriminating almost seems to turn him on.

Beria’s not afraid to get his hands dirty either, punching prisoners with such enjoyment one wonders if he actually wants them to talk.

Once Stalin is dead Beria pushes for an end to killing and the release of prisoners, which leaves colleagues so confused as to his intentions (is he a “liberal and radical” reformer in the mould of – yes, Stalin  – or is it all a trap?) they all alternately raise and lower their hands as Molotov tries to shoehorn this unexpected way of thinking into what has gone before.

Of course Beria can also bring back loved ones, seemingly from the dead. Molotov’s wife, who was thought to have been shot, has instead been kept alive by Beria in prison, and he now returns her to her husband; a flourish rather spoilt by the refusal of Molotov (Michael Palin) to speak of her as anything but the lowest traitor, such is his loyalty to the party and fear of Beria.

Stalin’s children also put in an appearance. Rupert Friend manages to keep the drunken, silly, manchild Vasily just the right side of annoying parody. Svetlana (Andrea Riseborough), Stalin’s daughter, looks like a more frumpy Princess Anne, and though she’s intelligent her spoilt upbringing means she is both clear-sighted and densely entitled.

You don’t need to know any Russian history, as there are helpful labels on screen. In fact if you’re older and actually remember the Soviet Union, or are a bit of a history buff, you’re going to lose some of the “who dies?” tension (apart from Stalin. That’s already been massively spoilered in the title).

buy / rent death of stalin on vod or buy the dvd or blu-easy from amazon.com

Watch the trailer Death Of Stalin: