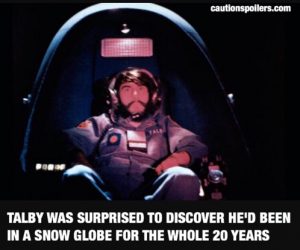 Set in the 22nd century, Dark Star chronicles the lives of the crew of the eponymous spaceship – already in space for two decades, they are tasked with destroying unstable planets so Earth can potentially colonise other planets nearby. Contact between the Dark Star and Earth is perfunctory and occasional at best. Mission Control back on Earth make it clear that of course their support is still as strong as ever, as long as it doesn’t require any action or money. And the Dark Star really could do with both.

The ship is gradually falling apart and this is chronicled by the crew: “the short circuit in the rear seat panel that killed Commander Powell is still faulty!” But worse than that, “Storage Area 9 self-destructed last week and destroyed the ship’s entire supply of toilet paper”. Despite an eternity looming without the small luxury of Andrex Quilted, there are some compensations – Talby (Dre Pahich) is perfectly happy sitting in his clear dome at the top of the Dark Star, simply watching the worlds go by, and waiting for the Phoenix Asteroids that glow like rainbows as the ship heads into the Veil Nebula. And the men have only aged 3 years in the 20 they have been up there (now we know why Keanu is so into scifi).

As astronauts they are pretty ropy. They’ve been up there ages and if they weren’t loopy when they set off they certainly are now (though shouldn’t people go mad less quickly in space, like the ageing thing?)

The men have taken refuge in simple pleasures to while away the years, most of which annoy their colleagues. Dolittle (Brian Narelle) loves reminiscing about his surfer dude days in California, and playing his homemade bottle organ; Pinback ( Dan O’Bannon) is either tormenting the others with comedy glasses or looking after their pet alien (a bouncy creature which looks as if a Space Hopper has had an accident involving that horror staple, a vat of toxic waste); Boiler (Cal Kuniholm) loves a good cigar (I wonder what smokers do on spaceships now? It’s not as if they can pop outside for one).

Technology may not have resulted in an effective messaging system but they sure have intelligent weapons. Well, more intelligent than the crew anyway. An intelligent bomb, which is clearly a solipsist (“the only thing that exists is myself” it tells Pinback) and a Cartesian (“Well, I think therefore I am!” he tells Dolittle) has malfunctioned and is going to detonate itself in a few minutes. It refuses to disarm, so the crew reanimate the dead and frozen Commander Powell for advice and while initially he is pretty useless (“Sorry, I’ve drawn a blank”) he does eventually suggest they talk to the bomb about phenomenology. Dolittle, who is clearly an epistemologist (“you’ve already admitted that you have no real proof of the existence of the outside universe” he tells the bomb) debates philosophy with it in an effort to persuade it not to explode, a conversation about existence which sounds very much like a pub session after one of my uni tutorials back in the day.

I did, you see, study philosophy at university years ago – so long ago in fact I was practically a contemporary of Plato himself – and the only thing missing from this scenario was a hand so the bomb could stroke its chin while discussing its philosophical options.  It does then retreat back inside the loading bay to consider the  ramifications of its actions though sadly it doesn’t end well. Which begs the question, was the bomb too intelligent or not intelligent enough?

Dark Star wins on two counts for me – it’s short at just over 80 minutes, and it’s very, very funny. I can excuse a lot in any film that has one, or even better both, of these compensations.

Though to be honest the only aspects of Dark Star that need excusing are the rather ropy sets, and there’s a good reason for those. The film was made on a tiny budget ($60,000) and it certainly has a homemade look. Nowadays there’s probably an app that can do more in a couple of minutes. Compared to another equally 1970s-era sci fi classic, Silent Running, which came out two years before, they look as if they could fall apart at any minute. Having said that the silver foil spacesuits are cute, and I didn’t actually see any egg boxes or loo roll tubes.

Although this is a snappy and funny satire, even on its tiny budget it still manages to dig a bit deeper. It covers themes such as isolation that Carpenter later examined in The Thing, and has the same type of very functional, unflashy setting and functional, unflashy crew that O’Bannon later utilised in Alien (which he wrote).

Despite the obviously 1970s settings and the clunky sets, although it looks old it doesn’t feel old. And let’s face it, we’ve had to sit through so many ponderous sci fi movies over the past few years, some with huge budgets, that this witty, short take on how people copy with isolation and abandonment actually feels very fresh.