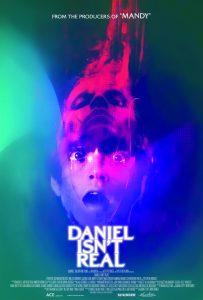 This is an electrifying and unforgettable film, a psychological thriller that morphs seamlessly into gut-wrenching horror.

Daniel (an excellent Patrick Schwarzenegger) is everything Luke is not: seething with psychopathic glee, confident and insolent. But he’s also a disruptor, there to raise hell, possibly literally; and one of the questions the film asks is whether we need Daniels within ourselves, like court jesters from the past, immoral but forcing us to think and grow.

He knows his literature, speaking of poet and visionary William Blake, providing college test answers while sitting unseen on the stage at the front of the lecture hall, while also reminding Luke that he has the power inside him. Maybe Daniel is indeed a necessary evil?

We first meet Luke as a small boy, running away from his parents’ break-up in their brownstone, and coming across the aftershocks of a shooting in a cafe. The shooter is called John Pigpen and he’s lying dead across the step covered in blood.

It’s here that Luke is befriended by Daniel, a young boy with preppy hair who becomes his invisible best friend, coming home with Luke at the invitation of Luke’s mum Claire (Mary Stuart Masterson) even though she doesn’t believe in him.

At Daniel’s behest they try to kill her with her own pills; it’s a trauma Luke carries with him into adulthood, when he returns home to his mentally ill mother and lets Daniel out of the doll’s house to which he’d been banished years before. Daniel too is now an adult, still the ultimate frenemy, and still sneeringly callous.

As the inescapable Daniel – always present, even as Luke desperately tries to explain his malign influence to his therapist Braun or new artist girlfriend Cassie (Sasha Lane) – starts trying to take over, he drives Luke (Miles Robbins) to do more terrible things.

Schwarzenegger is initially unnerving and later utterly chilling, as Daniel hides behind an assumption that he’s a figment of Luke’s troubled brain while becoming ever more real and solid. That title becomes less a firm statement and more a desperate panacea for Luke as Daniel, whatever his origins, makes his presence felt.

The battle for Luke’s head is replicated in his surroundings. This is a shadowy film, as Luke and Daniel fight it out in the dusty curtain-draped house, a nightclub or a red-glared darkroom.

In fact red light is everywhere, as Luke becomes stuck in his own personal hell, fighting his demons and his desires. And while the budget doesn’t stretch to Constantine-like hellscapes, gradually an air of the medieval slithers in.

Braun (Chukwudi Iwuji) doesn’t believe in Daniel and gives Luke pills: “the mind reflects its environment” he tells his patient. Cassie tries to help but they don’t know each other that well. Her walls are dotted with symbolically empty picture frames, her portrait of Luke has a dark shadow in the background. (Lane is moving but underused, seeming as if she’s there to drive the final showdown.)

Robbins is impressive as Luke, a young man deeply troubled but also excited as Daniel starts to take him over and Luke’s meekness turns to mania.

Daniel’s realness depends on what you consider “real” to mean. We’re presented with three options for his existence, though it could be that he’s all three: a way for Luke to cope with his traumas; a symptom of Luke’s inherited mental illness; and Luke’s vulnerability making him a perfect next victim for a demonic presence.

The transition from psychological thriller to full-on horror is smooth and deeply sinister, its special effects budget used to great effect with characters’ shocked reactions adding weight to the visual scares. The last horrifying act is particularly effective just when it could easily have collapsed into pastiche.

In the first half the emerging mind horrors are magnified by the shadowy worlds Luke inhabits; the second half turns those fears into nightmarish twisted, melted monsters. (Though throughout the film the most disturbing scenes are when Luke is trying to explain about Daniel to other people, while his imaginary friend sneaks up, telling Luke what he’d like to do to them. He reminded me of Anthony Hopkins’ Hannibal Lecter, revealing his rapaciousness with a sniff when he’s near Clarice Starling.)

Whether Daniel is a literal demon or a figment of the hidden power of Luke’s subconscious is interesting (I’ll admit I do like stories that finish with all the ends neatly tied) though this movie is really about the darkness that resides in all of us, and the way we excuse our worst impulses. Daniel seems to be an energised demonic force who believes himself to be both creative and radical, a disruptor whose brilliance should leave him free from the shackles of morality.

Very occasionally I detected a suggestion in Daniel Isn’t Real that this is Luke’s mother’s fault: for being ill, for making his dad leave, and for not believing in Daniel, feeding into old ideas of blaming women and especially mothers.

But mostly its focus is a young man struggling with feelings he cannot escape, that make him feel both near death and more alive than ever before – and ultimately his attempts to do the right thing whatever it costs him.

The idea that someone believed to be ill could actually be possessed is not a new one, flipping the historical assumptions of mental illness that they were in fact supernatural in origin. The trick is to present it in a compelling way that’s frightening yet fresh, without being exploitative – and director and co-writer Adam Egypt Mortimer certainly succeeds at that.

Daniel Isn’t Real will be hovering just beyond the corner of your eye, looking amusedly over your shoulder, and breathing menacingly on your neck, for a long time to come.