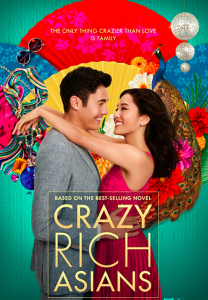 Oh Nick! Born into a family of billionaires – information he doesn’t share with long-term girlfriend Rachel until they’re flying first class from New York to Singapore – he’s gorgeous but a bit clueless.

Frankly I’d be livid if the boyfriend who kept borrowing my Netflix password turned out to be rich enough to actually buy Netflix.

Luckily Rachel is less judgmental than me, and takes news of his family’s extraordinary wealth in her stride. Though little does she know how many of the people she’s about to meet will be judging her.

This is a traditional love story, as a hard-working, beautiful young woman struggles to be accepted by her boyfriend’s rich family and, particularly, his mother – while dodging relationship missiles elegantly lobbed by young women who think she’s stolen their top bachelor prize.

Love stories have a universality than can touch us all. Add some noughts to Jane Austen’s 18th century eligibility criteria based on an income of a few thousand per year, chuck in her clearly-delineated levels of where we sit in society, and even the lack of financial prospects of a fourth son, and we’re in the middle of Crazy Rich Asians.

Well-made romantic comedies are always welcome, though Crazy Rich Asians has been expected to do way more than most movies in the genre. Realistically, no film can solve all issues of representation, far less a Hollywood romcom, and this doesn’t try to do everything.

But its sparkle and wit overlay a journey into deeper aspects of Asian culture, signposted by director John M. Chu with an unswerving hand – resulting in a clever and thought-provoking blend of traditional romance with Chinese-Asian life that remind people like me from dominant cultures, that this time we need to decode the meaning of someone else’s traditions.

And it’s easy to forget, while laughing with Ollie and Peik Lin and grimacing at seemingly impossible-to-please Eleanor, why it’s taken so long for a film like this to be made, and why Eleanor needs her wealth and position. The first scenes flashback to 1995, as she turns up drenched at a private London hotel with her family, and the manager refuses to accept their booking. Her response (calling her husband and asking him to buy the hotel) says as much as the hotel’s racism.

Fast forward and money-wise little has changed. Old money is best, new money is sniffy but vastly superior to no money. And working your way up is suddenly worth nothing when your boyfriend’s mum considers sacrificing everything for family to be both the right thing to do and the harder path.

Rachel, brought up by her single mother, is an economics professor and game theory expert at NYU. Nick (Henry Golding) is heading home to Singapore for a friend’s glitzy wedding, and he’s determined Rachel accompany him and meet his family. Though she doesn’t get to keep the news to herself for long – overheard in a New York bar asking Rachel to come with him, Nick’s news is relayed so far, and so fast, his mum calls him about it even before he’s left the premises.

Later, as people try to work out which wealthy Chu family Rachel might be part of, cousin Eddie lists endless moneyed Chus, differentiated by country and industry.

The dazzling opulence is vividly realised, from gold-decorated homes to an enormous pair of jewelled earrings costing over a million (even more remarkable when you consider the moderate $30 million budget).

Rachel is a real (in every sense) delight. Though Nick is frustrating in his inability to support her meeting his family, despite him previously running away to New York to escape them. Ollie would’ve chucked a pointy Jimmy Choo heel at the instigators of the bachelorette party nastiness, but Nick’s a bit of a wet blanket (cashmere of course), minimising Rachel’s real feelings of isolation.

Nick’s cousin Astrid (Gemma Chan) is one friendly face, though her marriage to a man without independent means shows how badly things can go wrong, as she hides expensive purchases and he blames her for his struggles.

But the important relationship is between Rachel and Eleanor. And even without Rachel’s faux pas she’d never have been good enough, as an Asian-American and without family wealth.

The best romcoms have scene-stealing support and here Crazy Rich Asians blesses us. Rachel’s friend Peik Lin (a coruscating Awkwafina) is a hilarious vision in bleached bowl-cut and printed PJs (“Asian Ellen” her own crazy family called her on her return to Singapore from the US). And she’s a brilliant friend, offering the support and insider knowledge Nick should and doesn’t.

Her father (Ken Jeong) appears at lunch resplendent in a padded white and gold bomber jacket. Her mum (Chieng Mun Koh) is over-the-top adorable. She has fabulous little identical twin sisters who will finally make you forget the scary pair in The Shining.

And then there’s Ollie (Nico Santos), the poor cousin. What he lacks in money he makes up in style and one liners.

Ultimately this is a film about mothers doing their best for their children. And as all mothers know, whatever you do it’ll probably turn out to be wrong.

Eleanor, Rachel’s mum Kerry, and Astrid all make or have made what they believe to be the most important sacrifices for their children (Yeoh’s layered performance is extraordinary – utterly solid yet learning to bend slightly with the changing winds. It’s a role that would be easy to play as one-dimensional and brittle, when Eleanor is hugely complex).

Crazy Rich Asians is a traditionally-structured romcom that for once highlights different voices (though as usual I wished the heroine ditched him. I know that probably says more about me).

At times the film is heavy handed, and expositionary dialogue can be clunky. Most of the funniest lines go to Peik Lin and Ollie.

But the best scene goes to Rachel and Eleanor, playing Mahjong – both arch strategists when they need to be, both taught to play by their mothers. (And I didn’t realise how brilliant this scene was until I read this from the Angry Asian Man blog – check it out.)

Note: there IS a mid-credits scene so don’t leg it out of the cinema to a restaurant or to do some shopping, or to get married. It’s very short, but very sweet.