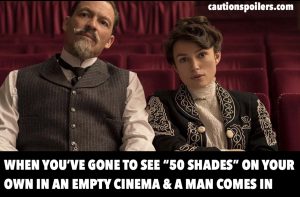 I am the real Claudine, the young women of Paris all cry, as Colette’s series of novels about a young French woman hit a nerve.

Born Sidonie-Gabrielle Colette (she shortens her name later as she starts to create a new identity for herself as the author of her books), she is a woman ahead of her time. Her husband Willy is a man of his, though in some ways he encapsulates the modern world – with his factory of ghostwriters churning out novels with his name on, his personality now a brand.

Willy is shallow but handsome, shallow but funny, shallow but… well you get the idea. He’s entertaining, and initially there is a co-dependent and genuine love between them, but he’s never had to be more.

I have no idea how anyone believes that books written by a woman are actually penned by him, as his ideas are so blokey. Coming up with an outline of a new novel (for someone else to write, obviously), he describes a man and a woman, who after enjoying a four-day Parisian shagathon, find something has developed. An unbreakable bond, I believe he said – “cystitis, Willy, that’s what will have developed!” I shouted silently at the screen.

The problem with outsourcing is that you have much bigger outgoings; and it’s rare that Willy (Dominic West) can afford to even pay his scribes. Marrying the young Colette (Keira Knightley), a country girl without a dowry, leads to him losing his own inheritance, a fact he is happy to throw back in her face during an argument. But their lack of money doesn’t stop him living the high life, to maintain that brand.

She’s soon writing up her own school days into her first novel, Claudine A L’Ecole. Initially she’s sanguine when it appears in the shops with only his name above it. More books follow, fictionalised accounts of her own life. After one hugely successful launch, Willy is raised aloft in a smoky salon, glass of good champagne in his hand, by a team of male friends congratulating him. She sits nearby, rather amused.

Willy’s input is mainly limited to cries of “more spice, less literature!”, until he angrily locks her in a room to write because their finances require another published book. Years later he goes through her old manuscripts trying to prove his contribution, noting the few times he’s made a suggestion about the text. He’s embarrassed enough to ask their secretary to burn the notebooks.

Knightley excels, so don’t groan that she’s in yet another costume drama. Colette’s growing confidence is entirely believable, precisely because she’s never a complete walkover, even at the very beginning. She makes her own thoughts and beliefs known from the first scenes (early in their marriage she appears at a society event in a worn day dress, having taken off her expensive scarlet evening gown as it felt too tight). Her blossoming as an independent woman and as a writer feels like a natural progression.

Colette must get her self-belief from her mother Sido (Fiona Shaw), who, later in their marriage, pushes her daughter to divorce the sybaritic Willy (and while I don’t want this to to turn into a “this is what I would have liked the film to be” review, as usual I would have liked more Fiona Shaw).

Colette’s series of books fly off the shelves, and are a particular hit with young women. But when they are turned into a stage play, one actress arriving to audition – Polaire (Aiysha Hart) – embodies Claudine so completely that soon Colette is copying her, cutting her long hair into a curly bob, and mimicking her style.

Tired by the stultifying confines of married life, Colette’s next relationship is with Missy (Denise Gough), a marquise. Previously married, now Missy lives and looks as she pleases. With a short haircut and men’s clothes, her determination to live her life her way strikes a chord.

Society is far more forgiving of Willy’s indiscretions than of Colette’s relationships, and a play starring Colette and Missy is brought to a close when Missy’s ex-husband’s cronies turn up to hurl abuse. Colette though is determined to continue to push through the barriers.

Wash Westmoreland’s film sparkles like a beautiful firework that keeps on exploding with more colour and more light as Knightley’s character takes bolder and bolder steps, the forward-thinking women she meets opening doors ahead of her.

Collette does though burn out before the film is through, and gets rather repetitive (though it’s certainly pacy). Ultimately this is quite a straightforward true story, though its message about breaking away from society’s norms of womanhood is timely (and sadly might well be whenever it was released). Colette demands her due in work and relationships, while finding a way to live as she wishes. And it’s always useful to note the threads from the past still twirling through modern feminism – not everything to do with sexual and workplace liberation is post-war.

Dominic West is an increasingly complex delight as Willy, even as Willy becomes less delightful. Initially a loving if selfish husband, eventually he betrays his wife and her work. By the end he cuts a sad figure, outgrown by the talented Colette. He claims to be “a literary entrepreneur” but he’s never added any value beyond his name and his connections, and when they lose currency there is little left.

There’s always a dilemma about accents in English language movies set in other countries. Here all the British actors playing French people use their English accents, Eleanor Tomlinson uses an American one. Colette writes in French, while simultaneously providing an English voiceover as we see her nib curling across the lined notebook page (an idea that works well, reminding us we are in Paris, which has always seemed to have a more liberated attitude to sex).

A period drama (the dresses! the carriages! the aspidistras!), based on a true story, with echoes of modern life, is always going to be an attractive prospect. Colette and her friends break through barriers of sex, sexuality and gender, making Willy’s own exploits look both patriarchal and pedestrian.