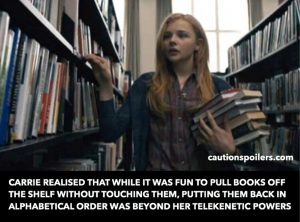 When I first saw the original Carrie (not when it came out in 1976 – I’m not THAT old)  – with its horrific tale about puberty and first periods dressed up with the ultimate mean girls and telekinetic fire-starting powers – I completely got it. Puberty is horrible. Teenage periods are horrible. Just remembering it all is horrible.

I was worried this time around, watching the 2013 remake of Carrie, as I’m now a middle-aged old hag. Would I only be able to identify with perimenopausal Mrs White (an excellent Julianne Moore), Carrie’s crazy mother? My children would probably agree and I have been known to consider their ability to take a perfectly clean and tidy room and completely trash it within 5 seconds without apparently moving from one spot as a devil-sent skill. Then again, approaching middle age seems to bring with it the same anxieties and insecurities as one’s teenage years, just with more flab, less sleep and wrinkles.

The first scene with Moritz isn’t that impressive – she does a lot of shrinking into her towel during swim class to show her nervousness at being around her unpleasant classmates but she is so attractive and modern-looking with her long, wavy red hair that it doesn’t really ring true. I was starting to think this would be another terrible, unnecessary remake, but then came the famous first-period-in-the-shower scene and she was really good.

One of the best-remembered scenes from the original, this time it’s been updated with a modern twist, as head bitch Chris (Portia Doubleday) laughingly films a hysterical, blood smeared Carrie on her iPhone and later shows it around the school. Teenage periods are pretty awful anyway (urgh it’s all coming back to me now, seriously if you need any more evidence that God is a misogynist it’s right there with the cramps, the flooding, the mood swings and general hideousness of first bras) but poor Carrie knows nothing about what is happening to her developing body and is terrified. The tampon / sanitary towel chucking is really upsetting and Moritz ably shows her bewilderment and sheer terror – in fact she’s so frightened she approaches her tormentors for help.

Carrie has been home-educated so has no back story shared with the girls in her class. A few are particularly nasty to her, many of the others just go along with it through thoughtlessness or “thank god it isn’t me” syndrome. Only a handful seem upset at her treatment, including Sue (Gabriella Wilde), who eventually persuades her boyfriend Tommy (Ansel Elgort) to take Carrie to the Prom, and the gym teacher, Ms Desjardin (a sympathetic Judy Greer and the nearest Carrie has to a maternal figure in her life). Meanwhile Carrie is starting to research her unusual and unstable powers (already seen in the school Principal’s office after the shower bullying, when she breaks a water cooler just by looking at it) to try to use and control them.

The iconic prom scene is really quite heartbreaking to watch. Ok it didn’t precisely reflect my own teen years – no one ever made me prom queen then poured a bucket of pigs blood over me (knowing my childhood they’d have left off the nice prom queen bit and just done the pigs blood) – but most girls and women will be able to relate that feeling of desperation at not being one of the popular cool girls (I suspect even the popular cool girls didn’t realise they were the popular cool girls most of the time, a bit like when you look back at old photos from the miserable years you spent hiding under enormous jumpers because of your self-perceived vastness, and your first reaction is “OMG I was so THIN! And I didn’t realise!”).

And knowing the storyline, as most people will, makes it even harder to watch, Seeing Carrie’s mistrust melt away as Tommy – Carrie’s prom date while Sue stays in the background –  is actually kind to her, and her delight at being made prom queen, when you know she’s about to be completely humiliated, is tough (and they don’t just pour the bucket of blood over her – they also play the shower video on big screens in the prom hall which ensures the mood goes from delight for Carrie, to laughing at her once more).

But once Carrie’s rage bubbles up, it doesn’t quite work. Moritz does a lot of arm waving in a long dress like a demonic version of Kate Bush in the Wuthering Heights video, which looks a bit silly. However her amazement at the strength of her powers is actually quite moving – it just doesn’t always work in its (no pun intended ) execution. And while most of the pupils have been pretty mean to Carrie, there are degrees of nastiness and her revenge seems somewhat haphazard. Clearly she’s been through so much that working out exactly who did what to her isn’t her first priority but it does mean you lose a bit of sympathy for her.

She does however despatch her persecutors in many satisfactory ways (no one ever uses their telekinetic powers to painlessly stop everyone’s hearts do they, there’s always burnings to death, electrocutions, trampling, impaling on sticks, etc.)

The fight scene when Carrie returns home and sees her mother is moving (and violent) though Carrie’s comment to Sue who arrives soon after that she – Sue – is expecting a girl is a tad melodramatic. (Unless she’s screwing with her and actually Sue is expecting a baby boy, or is in fact just a bit bloated and incubating a carb baby.)

All in all the Carrie remake was considerably better than I expected. I don’t have a problem with remakes and reboots anyway, it’s not like the original disappears in a puff of smoke (and I am more than happy to say that I REALLY LIKED THE ALL-WOMEN GHOSTBUSTERS). People can choose to watch the original, the new version, both or none (I know, free choice is AMAZING isn’t it. Spread the word!).

Chloe Grace Moritz – apart from the odd scene where she does the looking scared and hugging herself close thing, which is a bit obvious – does a really good job showing Carrie’s growing confidence in her ultimately not-completely-tameable telekinetic powers, as she battles the nasty girls at school and her crazy mother at home. Her giving over to her rage and power at the very end during the prom doesn’t entirely work but it’s still a moving scene, and nastily fun to watch horrible people get their comeuppance. The other actors are fine, though most of the characters are archetypes – nice Sue, horrible Chris, kind Ms Desjardin, the bumbling Principal. It’s not a particularly scary film, and I’m someone who still gets freaked out by face swap kittens on Instagram. But it has some horrific scenes in it, with some good performances.