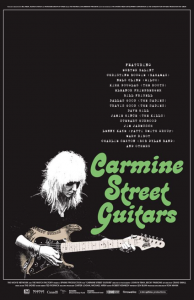 There’s a funny moment in the documentary Carmine Street Guitars when there’s an attempt to set up the realtor selling the six million-dollar building next door as the bad guy, but it’s very brief.

Properietor and legendary guitar maker Rick Kelly is frosty and monosyllabic with the salesman, but anyway is much more interested in whether the building for sale will be pulled down; Jackson Pollock used to live there and he wants the wood.

Rick makes his guitars out of reclaimed wood, salvaged from New York buildings being demolished. These are new instruments being made from 200-year-old trees, cut down in 1800 or before. Behind the shop there are rows of neat planks, labelled on each end with where they were saved from, and the date the wood was first used in that particular building.

“People’ve been spilling beer on this wood for over 150 years” Rick points out, after obtaining a thick plank from a long-established and famous New York bar.

It means that every guitar sings with history regardless of who ends up playing it: Jamie Hince (who appears in the film) or an amateur who’s just in love with guitars.

Rick’s methods and his clientele mean that there’s a joyous mix of past and living history in Carmine Street Guitars, as well-known working musicians come in to either try out Rick’s instruments, get their own tweaked or simply chat about the wares with someone who understands their obsession.

And while other people’s obsessions have the potential to be deadly dull, writer Len Blum and director Ron Mann ensure that the deep love for guitars and music that Rick, his five-year apprentice Cindy, and their customers have always feels entirely justified, and makes the viewer want to share it. (A lot of its audience will already share it, but this is a film that can reach the least musical).

The film covers a week in the life of the shop of the same name, a fixture of New York’s Greenwich Village. Rick has been there for years, though from what I can tell it’s a labour of love rather than a moneyspinner.

Sitting in Rick’s shop playing guitar at the end of the film, Charlie Sexton of the Bob Dylan Band puts it best, how a love of guitars can screw up your life in the very best way. He talks about a friend of his, super-successful in another field, who ruefully declared “the minute you pick up that guitar you’re just screwed!” And “destined for poverty your whole life!” adds Charlie.

The straightforward name of the film – which is also the name of the shop – sets the tone for the documentary. This isn’t a story told with unnecessary bells and whistles but it’s still a rich, layered world, existing within Rick’s light and airy workshop and store. And after following a week in the life of Rick and his workplace, it’s easy to understand what makes him, Cindy, and their customers tick.

Rick comes across as not just incredibly skilled but also incredibly kind. One of the reasons he took on Cindy five years before, after she walked into his shop to chat, is because he remembered finding it almost impossible to access support and training when he was starting out himself. They have a sweet and understated relationship, and her tears when she walks in to find that he and her boyfriend have set up a celebration to mark her half-decade as Rick’s apprentice is very touching.

Cindy looks in her twenties, and she’s about a typically rock chick as you can get, with bleached blonde, layered shoulder-length hair and a blunt blonde fringe, all set off with wide winged black eyeliner. A talented woodburner, she crafts images of musicians, designs and lettering on the newly-made guitars. (She’s also in charge of the shop’s Instagram feed!) Rick must be heading towards 70. Also working in the business is Rick’s mum, who cleans the guitars hanging from the ceiling with a giant feather duster and answers the phone.

Several of the chats do feel and sound staged – initially it’s jarring but by the end it becomes rather endearing (to be fair when they’re talking about the guitars and music they love, that dissipates).

We hear a little about Cindy and Rick’s childhoods and upbringings, and Cindy briefly touches on the sexism she’s encountered as a woman working with guitars, but mostly everyone talks about music, wood, art, the instruments and their own memories – the chat interspersed with musical interludes, as shop visitors sit down with one of Rick’s guitars, concentration merging with the look of the besotted.

Its characters are a Who’s Who of musicians, though not being a guitar expert I only know that because I read it in the publicity. (I did at least recognise some people – waves at Jim Jarmusch and Jamie Hince! – and some of the bands they play for). Kirk Douglas from The Roots, Hungarian singer-songwriter Eszter Balint, jazz musician Bill Frisell, The Sadies (who wrote the soundtrack), Wilco‘s Nels Cline, there to buy a guitar as a present for their singer Jeff Tweedy, Lenny Kaye from the Patti Smith Band, Bahamas‘ Christine Bougie – all of them are entranced when they pick up a guitar and start playing, no matter what their musical style.

Even when its noisy, it feels like an oasis of relaxation and authenticity among the bustle of New York and the city’s gentrification (the relator’s visit sets off a conversation around whether Rick could ever lose his premises, but it’s not a focal point of the film and he seems confident he can remain. I hope he’s right).

Jarmusch – listed in the end credits as “Instigator” – pops in to get his guitar improved, and they’re soon talking excitedly about Jarmusch’s favourite tree, catalpa, and its use in his guitar. It’s the myriad tiny details like this that help to make Carmine Street Guitars, the film and the shop, what they are.

From the materials Rick uses, to his reminiscences about seeing Jimi Hendrix play in the 1960s, to his careful carving of each instrument, this is a beautiful and engrossing film full of little memories that together tell a much bigger story: about music, craftsmanship and history.