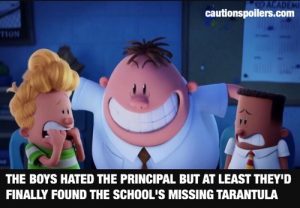 This is a film all about the strength of laughter, friendship, and knicker elastic – the ties that bind us and the binds that stop our underwear from falling down round our ankles.

George and Harold go to a miserably joyless establishment called Jerome Horwitz Elementary School where children are so unhappy they climb into lockers at the start of the day and don’t reappear until the final bell.

In their spare time the two boys either create comics in their treehouse (Harold illustrating and George writing the stories) or raise their friends’ spirits by performing endless pranks in the classroom.

Best pals since Kindergarten, they originally bonded over their shared inability to keep straight faces at the mere mention of Uranus and Gas Giant.

Captain Underpants is one of their own comic creations – a superhero for our times, who wears only underpants as that’s what superheroes wear, although his are proper underpants not those 1970s shiny satin football shorts that Superman favours.

A boring, joyless school is bad enough but they also have to contend with their deeply unpleasant Principal Mr Krupp, whose sole aim appears to be to destroy their friendship by putting the two boys in separate classes. And just in case you’re one of those wishy-washy liberals who likes to see the best in absolutely everyone, Mr Krupp also hates kittens – yes, I said kittens. On his desk is a plaque bearing the words Hope Dies Here, though I suppose it’s possible that’s the name of the previous incumbent.

But just when it’s starting to look as if the boys’ friendship will be torn asunder, help appears in the form of a cheap plastic ring from a cereal packet that can apparently hypnotise people. Not even the boys think it’ll work, but soon Mr Krupp has been mesmerised into thinking he is actually Captain Underpants himself. He’s not overwhelmed with superpowers initially – flying to the top of a building involves getting in a lift and looking intently at something, but it’s a start.

The sheer pleasure of having the Principal under their finger-snapping control makes school so much more fun – a friendly superhero in charge means that soon lessons involve drawing and painting, there’s a brilliant new school band that abandons musical instruments in favour of whoopee cushions, and the lockers are gradually emptying of small children.

But sadly that’s not the end of it – the forces of evil are mustering and besides, we’re only 30 minutes into the movie. The school needs a new science teacher, but what they get is an evil man in a lab coat with a Masterplan.

(Honestly I am so sick of overly male films – this could easily have been a woman science teacher with a Mistressplan. Ha that pissed you off didn’t it.)

Anyway their new teacher – a professor, no less – has two things that have so far stopped him from carrying out his evil endeavours and destroying the world. A silly haircut, and a name so ridiculous everyone laughs at it. Which is completely unbelievable as, well, look at the American President.

The professor’s aim is to rid the world of laughter by removing the humour section of their brains – rendering them joyless zombies, in a sort of metaphor for something or other. Pleas for leniency fall on deaf ears: “but isn’t laughter the best medicine?” he’s asked. “MEDICINE IS THE BEST MEDICINE!” he roars in reply.

Can the two boys control their epic creation, thwart the evil Professor Poopypants, and maintain their friendship?

Obviously my opinion counts for nothing in the minds of small children, though this time luckily our thoughts pretty much coincided. We all adored the whoopee cushion choir, which had my youngest bouncing in his seat, almost exploding with laughter; but even that was topped for them by the underpants-as-weapons scene where the Captain flicks one pair of Y-fronts after another at his enemies. A toilet that fired loo rolls they found less hilarious, probably because judging by the state my two leave the bathroom in they’ve probably invented that themselves already.

Captain Underpants has some cracking jokes in it (it can’t actually be that easy to come up with new fart gags and let’s face it Shakespeare nabbed some of the best ones 400 years ago) but more than that there’s a sense of utter joyousness that carries the whole thing along. George and Harold are so fun-loving, so endearing, but most of all so devoted to each other, it would be hard not to be swept along with their mad capers.

I did find the film quite confusing at times though my children understood it all. And the pacing is occasionally uneven, though the last third is fast-moving and laugh-out-loud.

At the end the boys survey their handiwork as Captain Underpants lounges opposite them in their treehouse. They are both stunned and proud, looking at what they’ve achieved: “I can’t believe we made him!” says an incredulous George. “He’s even dumber in real life!” says Harold, appreciatively. Which again could be an allegory for the American presidential elections though I prefer to see it as two small boys who through the power of laughter and unbreakable friendship have achieved something extraordinary.

I should warn you that there is a mid-credit scene so stick around if you want to see that. There may even be a post-credits scene too, I wouldn’t know as we had to make a quick getaway at that point after my son embarrassingly decided to announce to everyone within earshot “MUMMY I NEED A WEE!” (He’s 35).