You are here: Home / Film Reviews / Bros: After The Screaming Stops 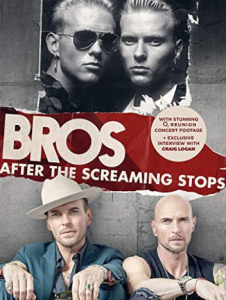 Is Matt shallow, or simply too scared to go deep into his psyche? Is he a bit of a joke, with his earnest, never-ending metaphors, or is the joke on us? Why doesn’t he look like his identical twin brother Luke any more? And where the hell is Ken?

None of these questions are fully answered in this exhilaratingly warts-and-all documentary about the Goss twins’ comeback show at London’s 02 Arena in 2017 – a comeback almost hobbled by their endless fighting during rehearsals and general prickliness.

But it doesn’t really matter as this is one of the funniest films I’ve seen in a long time – clearly unintentionally on the part of the men, yet directors Joe Pearlman and David Soutar still manage to turn our impressions of the siblings from ageing figures of fun to damaged, very different people who, at the end, we feel great affection for.

I’m still not sure Matt isn’t a character created by Ricky Gervais and played by Benedict Cumberbatch. There were times I felt justified in laughing (“I made a conscious decision, because of Stevie Wonder, to not be superstitious” he says) and times when I felt bad but laughed anyway (talking about how a security guard took a photo of him napping in the bath, the singer, who has every right to feel aggrieved, says: “you see yourself in the bath in a magazine, it’s embarrassing”, followed by a pause and “luckily there were bubbles…”)

Matt and Luke both live in the US now. Coming back to Britain they’re met at the airport by crowds of fans, presumably arranged online. The girls who used to wait outside their house are now middle-aged, delighted to meet their heroes though the relationship between stars and fans has changed now. Social media, and the number of old popstars jostling over lucrative comebacks, means we’re all well aware of how we can break their dreams as they once broke ours.

This is a well-structured film; the ratio of 80s scene-setting to current bickering rehearsals is ideal, and it doesn’t feel like Perlman and Soutar are relying on simple nostalgia to tell their story.

It’s a familiar tale of unconditional love and sibling rivalry. Though with famous twins it’s heightened, playing out old slights and arguments over and over on – literally and figuratively – a massive stage.

(By the way if you’re here for news of Ken, as their unrelated guitarist Craig Logan was nicknamed, you’re out of luck as he only appears in a snippet of old footage. Google him and you’ll discover he’s now a hugely successful record industry boss, unconcerned about not being asked to join the comeback.)

I was too old to scream at Bros. They found success in 1987, by which time I was 16 and pretending to like much cooler bands. Watching old footage of young girls overcome at their concerts did stir memories though, as only a few years before I’d been unceremoniously carried out of another gig involving musical twins who were also later (for a while) at war – Spandau Ballet.

I think it was Christmas 1984, and only my second live concert, my first being Wham! a week before (where I managed to stay upright for the duration despite George and Andrew’s provocative actions with shuttlecocks down their trousers).

Bros were ridiculed and bashed by the British Press particularly on their way down; an unpleasant state of affairs, party because of what it says about our contempt for their fans (mostly young girls and women).

The twins are now 50; Luke, the drummer, has done so much work on himself he’s an easy man to read (and to like). Matt, initially more breezy, soon turns out to be both brittle and touchy, and more vulnerable.

Not only are the brothers now dealing with volcanic arguments, bubbling ominously before exploding; they’re also trying to judge their own lives. You can understand the childish scratchiness and goading, and equivalent responses, when you realise that whenever they meet they see a version of themselves literally staring back at them.

Luke is now an actor, director and writer, adored by director Guillermo del Toro according to actor Ron Perlman. We see Luke in the edit suite of his latest film Your Move, a family kidnap drama. I haven’t watched Luke’s other films though my main take when I reviewed it was that while it wasn’t that great a script, he’s a good actor and adept at building a supporting cast. Maybe his experience managing his relationship with his brother has helped.

Matt meanwhile has reinvented himself as a big band crooner with a Vegas residency. It’s impressive, and goes some way to balancing his inadvertently hilarious delivery of those metaphors about life, success and failure, including one about cutting down trees with a butter knife.

Matt is a man typical of our age, talking in Instagram speech, beset by low self-esteem, bristling at perceived mockery. When he does unlock that armour he comes up with some nuggets of depth and fear, but mostly he won’t let himself or anyone else anywhere near his real feelings.

Luke looks more battered, a wiry, sinewy man now genuinely self-aware. Damage and soul-searching has made him resilient. Though he’s not averse to flinging insults at his brother, and when he does mock Matt, it’s partly an attempt at banter and partly done with a wicked glint.

Because I knew little of Bros beyond their scarily catchy hit When Will I Be Famous, and because Luke comes across as so together now, I was surprised to find out that he was derided as the untalented one in the group. 30 years on his bitterness is heartfelt over discovering that the drum tracks used to be preprogrammed, his musical contributions reduced.

Matt is fed up of saying sorry though: “I’ve felt like it’s been a never-ending apology for being Matt Goss.”

Arguments flare like fireworks. During one explosion, session musicians stand around the rehearsal room – the bassist checking his phone, another musician restlessly looking from one side to another – as Matt and Luke go off on one. Histrionics often attributed to silly girl fans but always more likely from their idols.

As with many families, time doesn’t necessarily mean growth; they never really escape their original roles, and are doomed to continually go over the same arguments and slights that have always stood between them.

I have three siblings so it’s a situation I’m familiar with, and it’s probably the biggest truth in the film. But it means that their claims to have broken through the barriers at the very end, as their comeback gig looms, look false. I don’t disbelieve their huge love for each other, just this Hollywood ending.

It’s hard to know how much of this is a fault in direction (in an otherwise hugely entertaining documentary) and how much is simply that the brothers didn’t really want to go through the exhaustion of reliving past traumas.

And both of them have been through real trauma, not limited to being built up by a pop machine and spat out, broke, soon after.

Despite Matt’s admirable musical reinvention in Las Vegas, he seems to be embarking on a journey down a road his brother is already far further along; it would be interesting to see how their relationship is doing down the line.

Watch the trailer for Bros – After The Screaming Stops: