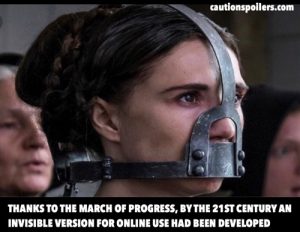 “It’s a woman’s fate” says young Joanna’s mother, when asked why her husband does so little to help in the house, but for him it justifies much more than avoiding the household chores. “Says who?” asks her daughter. “Says the Bible”.

Learning from her mother’s experience, Joanna decides not to turn the other cheek, but it means that when she starts running she can never stop.

There are four sections (Revelation, Exodus, Genesis and Retribution) shown out of chronological order, though it is easy to follow Joanna’s life, despite her name change.

When we first meet her, she is Liz (Dakota Fanning), a mute midwife, using her young daughter to translate sign language for the labouring women and their families. After spending part of her childhood in a brothel, now she is happily married to Eli (William Houston), and also has a stepson; life is bearable, loving and at times fun.

But when a new vicar turns up in their church, Liz’s fear of him is tangible. Soon he is turning townspeople against her with claims that she deliberately caused the death of a baby boy during delivery.

The Reverend (Guy Pearce) really will stop at nothing – this is a story filled with murder, suicide, whippings, and rape, though luckily, and rather amazingly, it mostly avoids gratuitousness.

He’s originally come with his flock from Holland, to create a “purer form of Christianity”. He also wants everyone to speak only English and berates his wife that their daughter still speaks Dutch, abusive in itself as it takes away the child’s ability to communicate until she is fluent in her new tongue (whoever controls language holds the power).

Music punctuates, especially the strains of Abide With Me, a song that the Reverend uses as a vocal calling card, turned from its original meaning as a request for god’s presence throughout all that life and death may bring, to a threat.

It’s very bleak, the legitimised violence towards women and girls expected but no less horrifying for that; watching the Reverend drag his daughter, only 13, through the mud before whipping her as she weeps, and knowing what is coming after that.  And he has no reason to stop. “I’m a doomed man… beyond salvation” he later says, “I can do whatever I want.” He’s certainly a man who never gives up, driven to destroy someone for not loving him.

The treatment meted out to the adult women is also horrific – rapes, beatings, whippings, humiliation, scold’s bridles, the list goes on and on. It would probably have been easier for men of the cloth to tell the women what they are allowed to do, though it would only be about four bullet points (housework, sex on demand, child rearing, looking at the ground a lot). It’s no wonder that for women in Brimstone, controlling their own deaths may be the only power they really have.

Joanna even cuts out her own tongue in order to take Elizabeth’s identity after her friend has been killed by a punter. Chances to escape – short of death itself – are rare, so waste not want not; Joanna becomes Liz in order to marry Eli, the man Elizabeth had arranged to wed, as he hasn’t seen his bride’s picture.

The sheer lack of agency in the face of male violence, and how easily they become accustomed to that, is terrifying – when Wolf, an outlaw hiding out in Joanna’s family barn, is strangled in the outdoor privy, the wooden door bangs open to reveal Joanna standing still, staring at what is happening.

The colours are dull but not cold, a neutral backdrop to a hard and dreary life. Blues, greys, browns, with black-suited and bonneted townspeople seen through tall dry grasses. Cleanliness is next to godliness and there’s a purity to their bare, well-swept wooden houses and all-black outfits that is the very opposite of the vicious misogynistic rage boiling constantly within the Reverend.

Dakota Fanning as Liz is a stand-out, bringing warmth and depth to a woman who could easily have been yet another cipher on which to hang a lurid tale of prostitution, stalking and murder.  She gives Liz’s consistency in picking herself up and running on (and on and on) a believability without which the story would collapse.

Guy Peace looks suitably terrifying, though it’s the relentlessness of his pursuit, and his later acknowledgment that he is already doomed, that is most frightening. It’s also probably the first time watching him I haven’t thought “but that’s Mike from Neighbours!” (I told you I was old).

With the story moving around as the Reverend chases Joanna, earlier, beautifully-drawn characters are easily forgotten; a shame as the relationships between Joanna and her fellow prostitutes Sally (Vera Vitali) and Elizabeth (Carla Juri) are fun and protective, the very best of female friendship.

Occasionally it collapses into melodrama though given the sheer number of brutal deaths I’m surprised this didn’t happen more often. But mostly Brimstone is sparse and bare, simply recording what is happening to the women involved.

It’s quite a numbing experience, watching sparks of hope so quickly extinguished; to the extent that although I usually cry at anything harder than a fluffy cloud, I only felt the prickle of tears once during Brimstone, when the excited Elizabeth, who has been through so much pain and has somehow managed to retain a sense of joy for the future, finally sees a picture of her husband-to-be Eli and his son.

For the women in the film, escape is almost impossible until the tiny gains made by their foremothers eventually coalesce into some kind of freedom. It’s still easily snatched away though, and even the movie’s slightly optimistic ending may simply be the result of a “nice” husband (or the absence of a bad one).

buy / rent Brimstone on amazon video, or on dvd or blu-ray on amazon uk

buy / rent Brimstone on amazon video or on dvd or blu-ray on amazon.com