You are here: Home / Film Reviews / Breaking The Limits 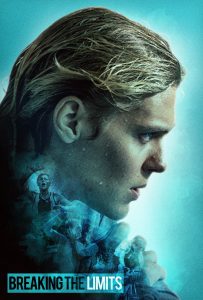 Breaking The Limits initially has an air almost of light-heartedness, as young Jerzy (Jakub Gierszal) and his girlfriend Grasnya (Anna Próchniak) inject themselves in a squat with their friends. Looking healthy and feeling they’re in control, they joke about how statistically most Western philosophy students have tried drugs.

Fast-forward two years and the couple’s heroin addictions have changed them almost beyond recognition.

Standing opposite each other in the middle of the street, both trapped in a cycle of abuse and despair, they now look like the walking dead – not only because of their broken, blotched skin, scabs and matted hair, but also in their behaviour. Jerzy looks at her as if half his brain has gone, a zombie peering close to her face as if to try and recognise her.

Despite the misery though, there’s a bounciness and desire to hold onto life that buoys up both the movie and Jerzy. It makes it more watchable and, presumably, is one of the reasons that the real Jerzy Górski managed to break the cycle, overcoming enormous odds, and transform his life.

Often with an “uplifting true story” I’m left wondering how much someone else, fighting the same bad start and same terrible odds, can actually relate to it. Movies are made about people like Jerzy precisely because they are unusual, their achievements so stunning that someone finances the telling of their story (albeit often with artistic licence).

Jerzy really did beat years of heroin addiction to become a Double Iron Man World Champion. His success is so mind-boggling (the event consisted of an 8km swim, a 360km bike ride and an 84km run) it’s almost unfathomable, even before you factor in the other setbacks and detours he had to navigate.

Yet what comes across – from both the excellent Gierszal who plays Jerzy, and the real Jerzy in the video footage of his greatest victory at the very end of the film – is that this particular young man has the ability to appeal to others at rock bottom, even if they have no chance of reaching the heights he has.

There’s also something about Jerzy that attracts people, and makes them want to help him; even as he’s at his lowest ebb, covered in sores and thieving to score his next fix.

His doctor Ewa Meller (Kamila Kaminska), Grazyna’s Communist Party apparatchik father (Adam Woronowicz), who starts off loathing the young man and moves, grudgingly, to respect and friendship, and his pool manager boss (Arkadiusz Jakubik) when he’s finally getting back on his feet – everyone does what they can, even if it’s just an offer of soup.

Maybe what makes Jerzy different is that even as addiction has him in its grip he still feels for other people. His humanity is like sunlight, protecting his mum from his brutish father, or visiting Grazyna and their friends in hospital as heroin takes its toll.

He’s nearly always an engaging character, whose ultimate battle is against himself: whether the voice telling him he’ll always be a junkie, or his body as he tries to struggle to the end of a race. That struggle, even if nowhere big as Jerzy’s, is relatable for most of us. (“Other Jerzy” is literally fully realised here, always looking exactly like him at that point in the story, talking to Jerzy through bathroom mirrors or trying to stop him in the street. It’s a device that works really well.)

Breaking The Limits unfolds in 70s and 80s Poland, and every scene is bathed in slightly washed-out colour. It’s a fascinating look-back. The country is still communist, and those at the top make full use of their power for their own political and personal ends, while young people do what they do the world over and everyone else enjoys their little digs at the State.

Grazyna’s desperate father has no problems ensuring Jerzy gets a kicking to keep him away from his daughter, who he’s struggling to save. But even the Party means nothing when you’re up against heroin addiction.

Jerzy himself bounces from squat to prison to rehab to hospital, half-heartedly fighting against drugs and the system as he goes. It’s when he starts working at the local pool that he spies a way out via endurance events. The pool manager provides comic relief, sitting smoking on the diving board, berating Jerzy’s terrible swimming technique while admitting he can’t swim himself. They joke about everything: “only informers don’t drink” the manager says drily as they enjoy a tipple after locking up.

But even as Jerzy starts training and entering triathlons on his old-fashioned bike and with his handover clothes in a plastic bag, he faces regular knock-backs, their effects terrifying (what if he succumbs to drugs again?) and simply exhausting (constantly having to pick himself up, you wonder at his reserves of determination, stubbornness and stoicism). A succession of awful events are topped by one disaster that seems so deliberately horrendous I wondered if it was misjudged artistic licence (I googled and it is apparently true).

The film does feel very long with most of it focussed on his repeated fall-backs, interspersed with too many fast-forward montages to (admittedly great) rock songs. Though I loved some of the little interludes, including Jerzy and Ewa’s dance class. The flamboyant instructor could have been a stereotype but for his dedication to his own sport, as he moves from couple to couple, the lithe 25 year olds and the long-married pensioners, pushing people closer together, forcing them to commit to a dance about obsession.

What’s missing is a fuller understanding of how Jerzy achieved what he did. We see the effects, but not what it is about his psyche that truly sets him apart. His achievements are extraordinary, extreme for anyone let alone someone with his problems. He wants to be a father to his little daughter, and he says that he can never stop in case the “other Jerzy” gains a foothold – but lots of people are in that place. What makes him different?

Director Lukasz Palkowski never overtly addresses whether Jerzy is substituting one addiction for another less harmful one, or if he’s simply finding a way to heal himself, though the question is raised in more subtle ways. Watching triathlon swimmers about to go into the water, they look identical in their blue trunks and swimming hats, not so different to the shaven-headed, blue overall-wearing residents of the rehab house where Jerzy stays for so long, trying to get clean.

Breaking The Limits is released on VOD in the UK, USA, Ireland and Canada on 31 March 2019. Pre-order on iTunes.

Watch the trailer for Breaking the Limits (Polish title Najlepszy):