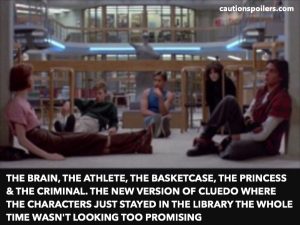 I like to think of Breakfast Club as happening a few hours before Fight Club, a place where everyone gets all the talking they can’t do about Fight Club out of their system, as all anyone seems to do on Breakfast Club – apart from a brief interlude dancing round the study hall to “We Are Not Alone” – is talk and talk and talk.

The Breakfast Club is a very wordy film, which shows how short our attention spans are nowadays. Nothing much actually happens in the film in terms of action (they run down a few corridors and take a few minutes out to dance around the study hall). The rest is talking, talking, talking, in one location. It’s funny, and realistic, but quite unlike a teenage film from 2016. And it’s still interesting, which isn’t a given.

Breakfast Club is a classic but it’s also 30 years old and even if you remember its 1980s heyday, you may not remember all the characters or why they were in Saturday detention at their high school at 7am. So here goes: the princess, Claire (Molly Ringwald) who bunked off school to go shopping; sportsman Andy (Emilio Estevez), who taped a pupil’s buttocks together in an attempt to mimic his father’s school exploits about which he hears so much; misfit Allison (Ally Sheedy) who wasn’t actually sent to detention, she’s just turned up as otherwise her day would be empty; nerdy Brian (Anthony Michael Hall) who had a flare gun in his locker; and bad boy delinquent John (Judd Nelson) who set off a fire alarm. They’ve all been sent there for 9 hours, to be watched over by deputy principal Dick Vernon, who expects them to write essays on who they think they are.

They are all from very different backgrounds (some challenging) but over the course of the day they find out what they’ve got in common (loathing of parents mostly, plus insecurities which mean that they act in ways they then feel ashamed of).

The Breakfast Club is an 80s classic but 30 years on it could best be described as creakily brilliant. It is still genuinely witty. Andy notices that clever kid Brian’s fake ID is so bad he’s made himself 68, and it turns out Brian only has fake ID “so I can vote”. (We could have probably done with a few more young Brians last week in the US elections.) There’s a hilariously true-to-life escalation of punishments for teenage delinquent John from the deputy school DP Vernon, who adds Saturday detention after Saturday detention on to the original punishment. The teacher’s inability to back down in the face of a teenager’s constant jabbing, because of his jealousy and sadness at the lack of respect they show him, is perfectly captured.

Unfortunately the film is also surprisingly misogynistic. Clearly some of this is due to the film narrative – John sexually harasses Claire, and he is at times called out on it. But not by enough people and not quickly enough. At one point he’s hiding under a table to escape the deputy principal and he realises he can see up Claire’s legs to her knickers so he puts his head between her legs. It’s treated as a bit of a joke but it really isn’t – it’s just normalised abusive harassment. And then at the end the implication is that they are a couple – they share a kiss, and she gives him a diamond earring.

There’s also that movie favourite, the geeky misfit girl getting a makeover so everyone can see that hey, she’s actually pretty. In this case Allison gets the subtle make-up with cute headband and pink dress, replacing her original cool rock chick look of shaggy haircut, masses of black eyeliner and a parka. Of course post-makeover Andy becomes interested in her.

Having said that, teenagers don’t really change much over the decades, even if the clothes are different and technology is everywhere now (and actually the clothes aren’t different – I definitely would wear Claire’s midi skirt and pink slouchy top with several narrow belts, though as I’m 45 that would probably put every teenager off wearing them, like, forever.) At one point the janitor, who has already pulled the kids up for mocking him for his job, points out to Vernon that “the kids haven’t changed, you have”.

The Breakfast Club is an ensemble piece where the story moves along though a series of conversations, as tentative friendships are made then broken then mended. Emilio Estevez, an actor I never particularly followed even back in the BratPack heyday, is brilliant. Judd Nelson is almost perfect – snippy, constantly getting at Vernon, bright but with a huge chip on his shoulder, though far too old for the role. Ally Sheedy doesn’t say much to start with and – in her silent enormous parka – is like a sort of live action Kenny-from-South-Park as she wanders round after the others (mercifully not dying).

The 80s outfits are perfect, though I imagine if I’d been watching it ten years ago I’d have thought they looked terrible – everything comes back into fashion eventually. Molly Ringwood’s hair is a phenomenon. It starts off vaguely backcombed with a bob and a side parting (very 80s), plus various other of-the-moment hair flicks. By the end it is so sculpted on one side that Claire looks rather like a young Margaret Thatcher if our first woman PM had been a pampered princess rather than a grocer’s daughter from Grantham.

Would I watch it again? Probably not. I love the odd nostalgia session but sometimes it’s best to simply remember your memories. Though no doubt in twenty years I’ll be rewatching John Wick and thinking how he really didn’t kill that many people and OMG where are all the women.