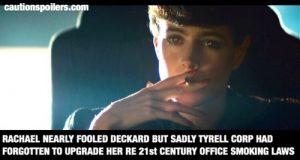 This is Ridley Scott’s final cut, and amazingly for directors’ cuts – which usually go on for about four days and leave you thinking “what, if anything, has actually been cut?” – this comes in at a nifty two hours.

Off to see the Blade Runner 2049 sequel and worried you’ll be completely lost? Whether you just need a recap after two decades, or you’ve told everyone it’s your favourite movie but you’ve never actually seen it, I am here to help with this utterly spoiler-filled review.

I first saw Blade Runner 20 years ago, though admittedly all I could remember was the voiceover, Rachael’s memories of the baby spiders, and the is he/isn’t he a replicant questionmark hanging over Deckard (Harrison Ford) himself. This version is different (it came out in 2007); there’s no voiceover, though there are baby spiders.

Early in the 21 century, replicants have been developed by Tyrell Corporation that are used as slave labour for the colonies in space. The Nexus-6 version replicants don’t have emotions but there’s an assumption that they will learn emotional responses, so a failsafe has been built in: a four year lifespan, fixed and unchangeable.

After an off-world mutiny they are now banned from Earth, on pain of death, though it’s called “retirement”. (Actually it’s probably best not to watch this if you’re over 65.) Any replicants that get to Earth are chased down by blade runner units and “retired”.

But after six Nexus-6 replicants hijack a shuttle, kill 23 humans, and escape to Earth, it’s Deckard’s job to hunt them down. It’s not a job he wants – Deckard has retired (in its original sense) from blade running, but ex-boss Bryant forces him to come back: “I need the old blade runner, I need your magic”.

The replicants clearly have business with the Tyrell Corporation – some have already been seen breaking in and been killed. Now just four are left: leader Roy Batty (Rutger Hauer, golden-skinned and platinum haired); Leisure/military model Pris (Darryl Hannah, in bedhead hair and eye make-up); beauty and the beast Zhora (Joanna Cassidy, showing us all how to wear sequins); and Leon (Brion James), who was last seen being questioned by the Tyrrel Corp before shooting his interviewer and escaping.

Chasing replicants who look like people is never going to be easy so the Voigt-Kampff test has been developed.

Deckard wants to try it on a Nexus-6 model replicant but Eldon Tyrell asks him to use a human subject first. Testing Rachael (a supremely poignant Sean Young), Tyrell’s assistant, Deckard decides she’s a replicant who thinks she’s human. But it takes over 100 questions (“you’re watching television and suddenly you realise there’s a wasp on your arm.” “I’d kill it”). Rachael has memories about her childhood and fake photos with her mother because the corporation knows memories make replicants easier to control.

And when Rachael visits Deckard at his home after the test, he’s happy to dash her beliefs.

The casual cruelty is shattering, though maybe to be expected from a man who has been tracking them down for years and may or may not be one himself. “You think I’m a replicant don’t you?” she asks him. “Those aren’t your memories they’re somebody else’s. They’re Tyrell’s niece’s” he replies before backtracking as she weeps.

Meanwhile Pris has been looking for Sebastian (William Sanderson) as they think he can get them to Tyrell. Sebastian is a genetic designer who creates toys, literally making his own friends, as a hobby. Because he suffers premature ageing, he’ll always be Earth-bound as he’d never pass the medical that space colonists must undergo. Now he’s living out his shortened days in his dark, decrepit but palatial apartment, filled with props and models and a chess set (there’s always a chess set!).

Deckard heads to a bar to find Zhora, who is working there, covered in sparkles and a snake. His cover story is so sleazy it’s no surprise when after showering off those sequins she turns the tables on him before escaping, throwing herself through glass walls before he shoots her.

Soon after, Leon attacks him, but Rachael appears with a gun and shoots him dead. Back at Deckard’s apartment she asks if he would now come after her if she ran. No he says, “but somebody would”.

It’s an emotional film, and now I’m older Rachael’s stoic acceptance that her memories are worthless is even more devastating, because as we age that’s all we really have. “I didn’t know if I could play” she says, heartbreakingly, sitting at the piano with Deckard. “You play beautifully” he tells her, before kissing her.

Thanks to Sebastian, Batty finally gets to meet Tyrell, and if Batty could feel emotion it would be now: “it’s not an easy thing to meet your maker” he says, in the tycoon’s candlelit apartment filled with sumptuous drapes and coverlets. “I want more life, father” he pleads, his four years almost up, but Tyrell is adamant that he cannot be extended.

There are shades here of Scott’s later film Alien: Covenant, about the relationship between android sons and their human fathers. Brilliant minds who have overreached themselves with hubris and suffer the consequences, as their soulless offspring commit that age-old human crime, patricide.

“The light that burns twice as bright burns half as long, and you have burnt very, very brightly, Roy” says Tyrell, but Roy’s tears turn to anger and soon he is feeling too much and Tyrell is dead, his head crushed, his eye sockets pouring blood.

Meanwhile Deckard goes to Sebastian’s apartment where Pris is hiding in plain sight. But despite the element of surprise, and a murder technique that involves strangling him with her thighs, he ends up shooting her dead mid-backflip.

Batty is dying. It doesn’t stop him torturing Deckard though, snapping the blade runner’s fingers in revenge for Pris, and Zhora. But though he ultimately saves Deckard up on the roof, his time is up.

The film is reasonably straightforward, though the gloom and darkness occasionally makes it hard to know what is going on. And if you don’t remember the plot you’ll probably remember Blade Runner’s dark, seedy world.

Does the sun ever shine in 21st century LA? It’s always blue-ly dark, always raining, the streets and even the apartments seemingly lit only by the glare of neon signs from fast food joints or bars. No wonder everyone wants to escape into space.

Sebastian’s apartment could be a metaphor for humanity itself: past its best, its decaying grandeur crumbling and dripping. Humanity had its chance and its Earth-bound dregs are scrambling around, surviving rather than living.

Is Deckard a replicant? Ford’s world-wearily brilliant portrayal pins him as a man who has lost feeling, not gained it, resigned to trudging through life until Rachael awakens something in him.

Still, I always wanted to assume he was. It would add pathos but also a happy-ish ending, as he and Rachael leave together at the end (it’s not clear in this version if Rachael has a four-year lifespan). “You know that Voight-Kampff test of yours. Did you ever take that test yourself?” asks Rachael, but she’s looking at photos from generations of Deckard family members, atop his piano.

Since then Scott, and this final cut, make it clear that not only is Deckard a replicant, but that he knows it by the end. After daydreaming about a unicorn, he later finds a tiny origami unicorn sculpture in his apartment, made by Officer Gaff – presumably evidence that Gaff knows what memories Deckard has. Then again, maybe I have false memories of this myself, along with all the Sarahs of the world.

buy / rent Final Cut on VOD or buy the dvd, blu-ray or 4k from amazon uk

buy / rent Final Cut on VOD or buy the dvd, blu-ray or 4k from amazon.com