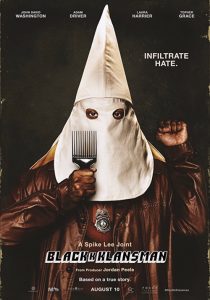 There’s a big sign strung across the entrance to the Colorado Springs Police Department, encouraging new recruits from diverse backgrounds to apply.

Ron Stallworth (John David Washington) is soon their first Black police officer, fulfilling his lifelong dream. And once there, he also joins another outfit as their first Black recruit; the local branch of the Ku Klux Klan, or as its leaders are trying to rebrand it, The Organization.

Ron can’t turn up himself at meetings, and he’s given his real name calling them for more information. Instead his white Jewish police colleague, Flip Zimmerman (Adam Driver), takes his place.

While Flip is face-to-face infiltrating a group who hate Jews as much as they hate people of colour, Ron is doing the same on the phone, eventually even developing a long-distance dialogue with their Grand Wizard David Duke himself (Topher Grace, brilliant creepy).

This all comes about after rookie cop Ron moves from his first posting in the Records Office – where he has to put up with the casual racism of other cops – to undercover work.

Initially he’s sent, wired-up, to spy on a talk for Black students by activist Kwame Ture (Corey Hawkins), formerly known as Stokely Carmichael, to see if he or his message of Black Power pose a threat.

Ron certainly seems torn. He’s always wanted to be a policeman, something he never deviates from; but he’s clearly affected by Ture’s speech and by the political idealism of Patrice (Laura Harrier), the head of the Black Students Union, and her friends. Increasingly his pursuit of her is driven by a mental and physical attraction as much as the demands of his undercover work.

Back in the office, he makes that sudden decision to target the Klan after seeing a newspaper ad; as he digs deeper his search for information is combined with some epic trolling of Klansmen who are (mostly) as stupid as they are racist, supported by his new department colleagues (none of whom appear to be racist, unlike the rest of the precinct).

I enjoyed BlacKkKlansman a lot as a comedy polemic; with the proviso that I’m a middle class, British white woman, who hasn’t ventured further into America than the liberal North East coast, and I had to Google Jackie Robinson. (There was certainly a dearth of black film critics at Cannes where I saw this, though check out Miriam Bale for W, and Jaqueline Coley for Indiewire, also referenced in Bale’s article).

BlacKkKlansman‘s humour is very broad brush, its messages unsubtle (comments about making American great again) and sometimes clumsily delivered. While the focus of the film is racism, Flip is also coming to the realisation that his own Jewish identity is under threat. Brought up non-practising (he didn’t have a Bar Mitzvah) he starts to hold his background much more tightly.

Two men from different oppressed groups working together to impersonate a would-be Klan member is breathtaking and brilliant. Though it also needs a delicate touch, and an actor of Driver’s calibre, to ensure Zimmerman’s story doesn’t turn into simply a nod to white people’s concerns (Driver is superb as Zimmerman, in case you were wondering).

There are huge tonal leaps, and my advice is just go with them: Harry Belafonte speaks eloquently to a devastated audience about the appalling horror of the lynching of the teenage Jesse Washington in 1916. Ron meanwhile, acting as security for Duke on the Grand Wizard’s visit to Colorado Springs for the new Klansmen’s initiation, whips out a Polaroid camera and gets a photo of him and the KKK leader, at the last second throwing his arms round him, to Duke’s disgust.

The stylistic changes are as vivid as the tonal ones: much here pays tribute to classic 1970s style and classic 1970s filmmaking (afros, fitted beige suits, the camera focusing on floating faces – simultaneously rapt and dreamy – during Ture’s speech). All that is bookended with what looks like a 1950s beginning (an unnamed white supremacist, played by Alec Baldwin, records a voiceover for a racist film but keeps getting it wrong), and an ending of shocking footage from Charlottesville in 2017.

It’s a film that does sometimes feel as if it’s zigzagging through its running time, presumably to highlight that though times change the white supremacist movement has endured.

It also includes recent footage of David Duke, still spitting his bile-filled racist messages, a chilling ending after we’ve enjoyed watching the 1970s Duke being thoroughly mocked. It’s a reminder, along with another 70s-set scene once Stallworth’s and Zimmerman’s investigation has come to a close, that mockery of the Klansmen, enjoyable though it is, doesn’t actually strip them of their power.

Washington is a joy as the naturally hilarious but solidly steadfast Stallworth: his determination to become a policeman, his personal style and deep-rooted self belief, his reactions to the casual racism of his colleagues, and his growing sense of being torn between his love of policing and the messages he’s hearing from black activists (though I wasn’t always convinced of the tension between his job and his growing politicisation).

He and Driver are terrific together, and I can’t be the only person who came out wanting to see them as a double act in a sequel, even if it has to be based on fiction.

Laura Harrier is compelling as the serious Patrice (mostly serious – there’s a fantastic dance floor scene between her and Ron that is part realism and part stylistic fantasy).

I liked the question mark over Patrice and Ron’s relationship. Joining the police has been his dream; she can’t envisage sex with someone in a job which she feels makes him the enemy.

Like many movements (feminism being the obvious one) there’s a clash between those who think that practically the way to effect change is from the inside, and those who think the institutions and structures are too tainted and need dismantling before rebuilding from the bottom up. Though that split is itself problematic. When members of a disadvantaged minority are fighting among themselves, their oppressors can glide to the top, if they weren’t already there.

Ron being the first black Colarado Springs cop is a big step forward but the new young versions of David Duke, the dumb Klansmen and Baldwin’s voiceover actor are operating out in the open once more.

BlacKkKlansman premiered at Cannes, where it won the Grand Prix.