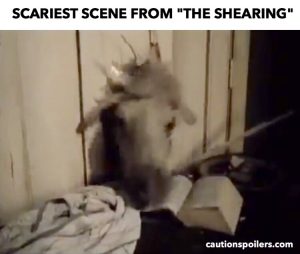 Part sheep revenge fantasy, part cautionary tale about the evils of capitalism and the naivety of some activism, this is a shear delight, as demonic zombie sheep-human monsters take revenge on their captors (and anyone else who gets in their way).

Not scared yet? Ewe wool be. If you like hiking, never has it been more important that you don’t drink the stream water in case there’s a dead sheep just out of sight further up.

This isn’t just a selection of sheep thrills though. Black Sheep is also very funny. Admittedly the humour is often daft and over the top, but if you’re going to be all baaaaaaaa humbug about it you can just flock off.

Black Sheep also boasts quite a high survival rate – and let’s face it, one of the delights of horror films is guessing at the beginning who’s for the (lamb) chop and who will survive to the bitter end.

The cast play it completely straight, and the transformed sheep monsters are genuinely unnerving.

To make matters worse, moments later their housekeeper Mrs Mac appears to tell them their sheep farmer dad has been killed. Poor Henry is left with an all-consuming terror of sheep.

The film then shifts 15 years into the future with Henry (Nathan Meister) returning home to sell his half of the sheep farm to his older brother. It’s an exercise in sweaty terror for Henry though, as his taxi is surrounded by a flock of sheep.

Unbeknown to the brothers, two environmental activists, Grant (Oliver Driver) and Experience (Danielle Mason), having herd about strange goings-on at the farm, are determined that no one’s going to pull the wool over their eyes – and are now secretly investigating.

But hidden in some woodland on the farm, Grant is attacked from behind by a demonic lamb, and begins his own ovine transition.

Henry and gorgeous farm manager Tucker (Tammy Davis) are travelling round the farm in a 4×4 when Experience creeps up and retrieves a rifle from their car, threatening to shoot them. She’s pretty useless as a killer: “is this going to take long, as I’ve got a taxi waiting” says Henry. “The safety catch is still on” says Tucker.

Experience is a bit sheepish about her inability to shoot anyone, and they all drive off then stop at a neighbouring farmhouse, finding the place trashed. Experience may be bleating about the terrible room fengue shui, but the killer sheep in the hall is a more immediate threat.

(Experience may seem as thick as mince but I bet she is one of those people we take the piss out of until the environmental apocalypse hits, at which point she will have a very lucrative ‘I told ewe so’ career.)

The tension is now rising as there’s a lot at (lamb) steak. Henry shuts them all in a room but the sheep is butting the door trying up break in, like Jonny from The Shining.

As Tucker, Experience and Henry escape, sheep are everywhere, terrifying yet at the same time what a snuggly way to go.

Poor Tucker is attacked while driving their truck, and after Experience explains to both men about the experiments that have been going on they take off his boot to find a sheep’s hoof instead of a foot.

Tucker is remarkably sanguine about this – “I’ll get the vet to look at it, it’ll be fine!” – but after escaping into a nearby building they find themselves in Angus’s lab.

Though the others escape, Soon Tucker, poor lamb, is strapped to a table being examined by Angus’s assistant Dr Rush. His new hoof is evidence of the cellular transference they’ve been trying to achieve for ages.

By now things are getting really offal. Angus is in the process of unveiling his new Oldfield sheep to his business audience when a flock of murderous woolly monsters attacks the visitors, tearing them lamb from lamb, I mean limb from limb.

There’s a joy to be had from a film which pokes fun and the finger at a range of annoying stereotypes from obsessed environmentalists to capitalist business people.

Yes it rams home its points with over-the-top glee, yet director Jonathan King doesn’t let his actors overdo it, despite the bizarre premise. The special affects are terrific – very creepy, with blood and guts that are realistically disgusting.

If you’re a vegetarian you may well enjoy watching sheep finally getting their revenge; if you’re a carnivore, watch it before a triumphant Sunday lunch.

I’m probably alone in seeing this as a warning from the future, though I have always felt that sheep were the evil ones on any farm.

buy black sheep on dvd or blu-ray from amazon.com