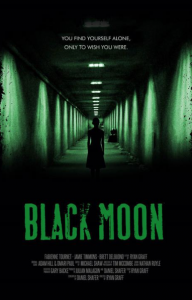 A film about a subway where you can clearly see the outside world at each end many not sound frightening, but knowing help may be tantalisingly close makes Black Moon an unsettling watch.

A black moon refers to the second new moon to occur in one month – an unusual event, and one that, according to this film, may be a harbinger of the supernatural.

Ryan Graff’s scary short, from a screenplay by Daniel Shafer, left me so unnerved I’ve only just been able to watch it a second time (perhaps viewing it alone in the middle of the night with the wind whistling outside wasn’t one of my better ideas. Or maybe it was).

Fabienne Tournet as the woman

Those eight minutes are effective and affecting. The setting – a gloomy, grimy underpass – feels drenched in misery and foreboding as soon as the young mother, coaxed away from her dark walk home by the sobs of a young girl, steps inside.

Inside the woman (Fabienne Tournet) approaches the girl, crouched down among the cigarette butts and litter.

But the teen isn’t what she first seems, and the woman then has to try to escape the underpass and whatever malevolent force might be in there with her.

Fittingly for a film about the moon, there’s something almost tidal as the woman tries to get out.

Tournet is impressive as the woman, unable to walk past the sobs she hears – her realisation that help and escape are nearby yet may be unreachable, and her feelings of relief and devastation, are really well done.

It’s even more disquieting that this isn’t a horror where someone gets their just desserts; being a good samaritan can be your undoing.