You are here: Home / Film Reviews / Birds of Prey: And the Fantabulous Emancipation of One Harley Quinn

This is an enthusiastically full-on and very loud film, with most of the action and talking happening at 100 miles an hour.

Director Cathy Yan drags us on a savagely entertaining fairground ride – by the end I too felt I’d been whacked over the head by Harley and her baseball bat and then blinded by glitter.

It’s probably theoretically possible not to have fun watching the fantabulous emancipation of Harley Quinn in Birds of Prey but you’d have to make a deliberate decision to maintain that po-face through the wisecracks, kickings and rollerskate chases, much of which takes place while waiting for a tween pickpocket to poo out a swallowed, stolen diamond.

And while Harley Quinn’s team (when they eventually get together) is made up of women and one young girl, it’s less about a contrived, Hollywood-friendly sisterhood and more about a group forced to work together to get out of a sticky situation who then find that they make a good team. 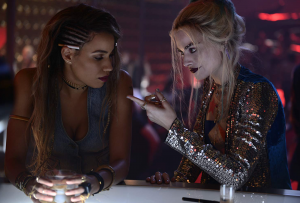 Any delusions of a special femininity bonding them together are turned on their head, even as we think we recognise those tropes and maybe even want them. Everyone moves slightly in terms of trust and support, but essentially they don’t change that much.

By the end Harley simply slightly dials down the waywardness into something more akin to being a criminal big sister. (By the way this isn’t going to be a particularly spoilery review – and anyway with an action comedy like Birds of Prey you can probably work out how it ends. What’s fun, and ear-splitting, is how they get there together.)

That diamond – even more valuable than your average multi-carat gemstone – has been stolen from Roman Sionis, aka Black Mask (a gleefully merciless Ewan McGregor), a properly pitiless villain and rampant narcissist; and his brutal henchman Victor Zsasz (Chris Messina).

Soon everyone is after orphan and diamond thief Cassandra Cain (Ella Jay Basco), with Sionis putting a bounty on her head and advertising it to all the criminals in Gotham – and if that sounds a bit Wick-Like, imagine a magazine photo story about John having to fight his way out of Claire’s Accessories and that’s pretty much Birds of Prey. 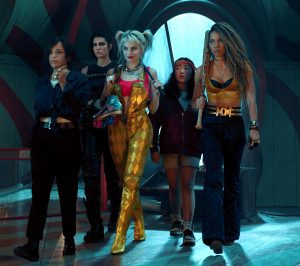 All the women are skilled enough to get by on their own, and they don’t actually team up for ages, their paths crossing in a plot that made sense at the time but which I now can’t untangle in my mind.

Cain is well-known already to detective Renee Montoya (Rosie Perez), a lover of 80s cop show dialogue (I waited patiently for a Cagney & Lacey reference to “Harvey Jnr” but alas none came), ground down by seeing her male partner take credit for her work.

Dinah Lance (the excellent Jurnee Smollett-Bell), also known as Black Canary, is a singer from Sionis’s club who saves Harley by beating up several men at once. Wow with a crossbow Helena Bertinelli, aka Huntress (Mary Elizabeth Winstead), has a bitter bloodsoaked past and is out for vengeance.

But, like Harley rewinding when it hasn’t come out quite how she meant, let’s go back to the beginning. Dumped by the Joker and desperate for closure, she blows up “their” chemical plant in a shower of fire and fireworks. And this film is really about her working out who she is in her own right, and moving on. For much of it she’s still a fizz-bomb of reactions, with even her plan for the five women to work together a bright and breezy thought that pops into her head when Sionis’s masked army becomes overwhelming. 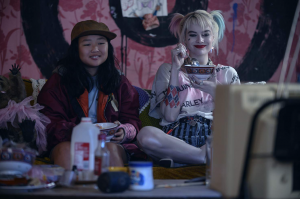 Ella Jay Basco as Cass and Margot Robbie as Harley

Margot Robbie is fabulous as the initially charming, thoughtlessly irrepressible, deeply troubled yet always self-reliant Harley Quinn. Unpredictable and untrustworthy, she leaves a trail of destruction in her wake as she tries to outrun her broken relationship with Joker as well as a city of people she’s royally pissed off at one time or another (her frequent meetings with them are highlighted onscreen with Name and Grievance written out in lurid pink and yellow).

In a generally terrific cast, Smollett-Bell and McGregor are perfectly pitched (Smollett-Bell literally so). Basco – still only 13 – is a very believable mixture of youthful naivety, streetsmarts and wariness.

There’s plenty of humour, from Harley’s pet hyena named Bruce (what other pet would a lone wolf want?) to Huntress’s increasing annoyance at being called Crossbow Girl, to the never ending list of people Harley has wronged.

The fights are stunning as Harley and Dinah take on whole groups of hoodlums and thugs. And whether the women of Birds of Prey are fighting men or each other, nothing has been made for the male gaze. It’s energetic and determined violence to get the job done (including pausing mid-fight to offer a hair bobble). Harley’s police station fight while trying to break Cass out, and a fairground funhouse fight, are both breezily breathtaking. 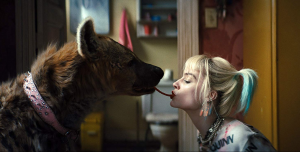 The violence is sometimes cartoonish – bullets shatter in a rainstorm of glitter – but mostly realistically vicious (saving face takes on a whole new meaning for Sionis, and wait til you see the pet food Harley feeds Bruce. Yes, I laughed). It all fits, though it does mean younger teens won’t be able to see it in cinemas, and there’s a lot here that would resonate with girls who feel other female movie superheroes don’t reflect them. (In the UK Birds of Prey is a 15 certificate.)

Yan runs a tight ship. Flashbacks and rewinds, chats to the audience, explosions and arguments, they all fit into a bumpy yet colourfully passionate and witty tale of revenge, double crossings, fightbacks and rescues. There’s even a Marilyn Monroe homage, though it could just as well be Madonna.

Teaming up with other women is great, BFFs forever, etc etc. But diamonds really are a material girl’s best friend.

Note: there is a brief end-credits scene where we hear Harley talk about a certain someone…

Buy Birds of prey on digital from amazon.com