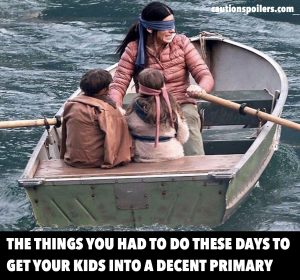 A stern and cold-voiced woman tells two 5 year olds named Boy and Girl that they’re going on a dangerous journey and if they don’t do what she says she will hurt them.

It’s a frightening opening to this film about motherhood, not just because of the calamity it hints at but also because this mother embodies the contradictions of the role – she seems the opposite of what we understand by the word “motherly”, even though mothers are mostly tasked, at its most basic level, with keeping our children safe at any cost.

Malorie hasn’t named them for several contradictory reasons; this is a movie and a central character made up of contradictions, which mostly work.

They’re unnamed because they will probably die, but also because it’s her job to keep them alive and a pared-down, honest existence is the only way she can do this. Because to name them harks back to “normal” life, knowledge of which may lead them to take of their blindfolds to experience it, but also because she refuses to admit she’s their mother (biological or adoptive) and it maintains that distance between them.

Their journey, down a river and into rapids towards some kind of haven she’s heard about over the radio from a man she doesn’t trust, is intercut with five years of flashbacks.

Starting with outbreaks of suicides in Russia and Europe, it spreads to the US, bursting into the streets as the self-isolating Malorie (Sandra Bullock) attends an obstetrician’s appointment for her unborn baby accompanied by her warm, outgoing sister Jessica (Sarah Paulson).

Whatever “it” is, it rustles through the trees on its approach and shows its victims something which fills them with such joy they look momentarily enraptured before killing themselves; survivors have to blindfold themselves before venturing outside, on trips only attempted when completely necessary.

Half a decade on and somehow Malorie has survived, with her child and another. (The lack of names sounds awful but actually on a superficial level isn’t a problem, just sounds to identify them – there were five Sarahs in my class at school though, which may be colouring my feelings on this).

Bullock is determined, terrifying and brilliant, highlighting that immense clash between Malorie’s drive to keep the children alive and her huge ambivalence towards the role – plus, at times, her ambivalence towards Girl (an extraordinary Vivian Lyra Blair, who says little but conveys devastating terror and understanding, both of the world they live in and of Malorie).

The only way to get to this refuge is via the river, and Malorie’s been told if she attempts it with children success is unlikely. They’re going anyway though. They feel their way along ropes to the water, and their rowing boat; she rows blindfolded and the children lie or sit in the boat, also blindfolded.

The danger on that journey is constant, the tension never-ending, the threat of death hanging over adult and children (it’s that kind of movie); tense except, ironically, when we check back to the flashbacks of society unravelling. [Note: I’ve added a spoiler at the very end, though you’ll have to scroll down past the review and the trailer, and a bit further still, to read it]

My first thoughts on the flashbacks were that they dissipated the edginess; we know from the start that Malorie’s first fellow-survivors either die or disappear. We also know she must acquire another child from somewhere. But, you know, so what? I’m just not sure it matters, and the way director Susanne Bier has structured the film works pretty well.

This is a story about one woman’s survival and how it makes her a mother; or rather makes her admit she’s always been one, albeit one who is regularly screwing it up.

As she staggers blindfolded through a forest looking for her lost children she’s like many modern parents as we try to keep our own kids safe during childhoods that are so unlike our own, in a world that has changed beyond our understanding (despite our determination to keep up with change in a way our parents never did for us).

Bird Box is a horror film (birth, motherhood and horror are a mix made in heaven, I mean hell) and it is tense, just not when it comes to background characters either meeting relatively grizzly ends or legging it out the door for a better offer.

And that first group of survivors form a decent ensemble, if a stereotypical one, as temporary sticking plaster peels off and cracks become fissures.

Doug (John Malkovich), is yet another grumpy bastard, suing his neighbours who want to rebuild their house in glass, though who’s laughing now that no-one can look outside. BD Wong is Greg, that neighbour and the owner of the house, hoping they can avoid the entity by using cameras to see (“Pixels and heat” he calls it). Jacki Weaver is the motherly Cheryl, Danielle Macdonald (star of Patti Cake$) the guileless and heavily pregnant Olympia, a Disney fanatic who wants to call her daughter Cinderella.

Tom (Trevante Rhodes), like Malorie is strong, brave and sensible, yet in entirely different ways – a counterbalance to her cold determination. At times he’s acting as Malorie’s conscience, bringing the past to life through his recounted memories. It’s a smallish role Rhodes fleshes out to be truly memorable.

As usual there’s an internet-informed End Times expert working a dead-end supermarket job, this time given extra nuance by Lil Rel Howery as Charlie. Luckily for everyone, Charlie was the last person to lock up the store and still has the keys (I’d love to say I most identified with Malorie but I have to say I was with Doug when a first supply run took them there and he wondered why they didn’t all just move in).

It’s a thin line between signposted metaphor and clever link, though I liked the bird box double meaning. Their pet birds, beautiful in their green plumage, are kept in an actual box, both a link with a more frivolous past and a tweety early warning system. And it’s also about Malorie herself, once shutting herself in by her own deliberately blinkered approach to life and other people, and now forced to do so by circumstance.

Often Bird Box feels very derivative; of particular films and generally of apocalyptic movies. I’m amazed how quickly people work out, if not what is causing the destruction, at least how they can avoid it. There’s a weird idea bobbing around too about the immunity of people with mental illness, with some being used to tempt others to look at whatever it is. It didn’t feel well-enough thought through to add much, and also avoid stigmatising.

Bird Box is scary though, and enjoyable, with Bullock’s performance leaving me weeping through my maternal blinkers.

UPDATE: scroll down past the trailer (and a bit lower…) if you are desperate to find out who if anyone survives, and if they find their haven.

Bird Box is available on Netflix. Watch the trailer, below:

Malorie, Girl and Boy do make it to the haven, which does exist (though they have to face more than the river to get there). The haven turns out to be an old facility for blind people. Now, having told you that I expect you all to shed a tear at the end! Merry Christmas…