You are here: Home / Film Reviews / Bingo: The King Of The Mornings 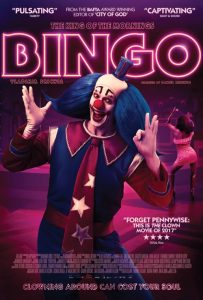 Handsome Augusto (Vladimir Brichta) is separated from his young son Gabriel’s mother, but he’s still an attentive father. He lives with his own mother Marta (Ana Lúcia Torre), a once-famous actress who now works on a TV talent show.

Gabriel (Cauã Martins) wants his dad to do a children’s movie, and Augusto agrees: “you’ll see my next movie with all your friends from school!” he promises, so I’m assuming his other great work, “Megalomaniac Nymphets”, had already been and gone by this stage.

Augusto is one dimensional, and arrogant, convinced he is destined for better things. He’s also bitter that after being taken on by soap opera producers and ratings behemoth Mundial, he only gets one line to say on screen. He has, after all, starred in Lamp Of Love.

But despite his unerring self-belief, he is also charming in a happy-go-lucky way, the kind of man you would happily tolerate talking about himself all evening (I should know, I am that kind of woman).

It’s at another audition that he spies a line of red and blue-clad clowns waiting in line, and decides to try out for that gig instead. Bingo is a children’s TV show that has been a decade-long success in the USA. Its American producer Peter Olsen (Soren Hellerup), who doesn’t speak Portuguese, is in Brazil to choose his new Bingo and oversee the series launch.

The script for Bingo’s show is dull and unfunny, so when it’s Augusto turn to audition he mocks the producer in Portuguese which he doesn’t understand. All the crew are in hysterics, Olsen assumes he’s a wonderful clown, and Augusto is hired.

Marta is initially concerned: “no more butt on screen?” she asks warily when he tells her of his new job, before hugging him.

Unsurprisingly Bingo’s initial shows do not go well, but Augusto is chomping at the bit to go off-script, and as soon as he does – mocking young bullies, telling off-colour jokes, and (the height of 80s modernity) taking phonecalls from children – ratings soar. Imagine a Brazilian Tiswas to get the full effect.

Augusto’s Brazilian producer, Lucia (Leandra Leal), has given him some leeway with Bingo, but at his own risk. It’s hard listening to the way he speaks about her, even if it is appropriate for the times and for Augusto: “does she ever come? Someone needs to fuck her” he says of her early on, betting a crew member he’ll soon have sex with her.

The network won’t let Augusto tell anyone that he is Bingo, so he can’t properly enjoy the adulation that his success should bring, even attending award ceremonies in full Bingo regalia.

Still an outsider, he falls prey to the many temptations available: becoming increasingly anarchic at work (a gyrating singer in a tiny dress is brought in, jokes get more adult-oriented) and out of control outside it (cocaine, threesomes, a sexual encounter in a toilet cubicle while in full Bingo costume that reminded me of Bad Santa’s shenanigans in the Big & Tall changing room).

Poor Gabriel is meanwhile reduced to watching Bingo on TV, unable to tell his friends who his dad is, prearranged trips to the movies cancelled at the last minute.

Like many great comics, it seems as if the ground-breaking anarchy cannot exist without the out of control behaviour. And do we even want it to? When male comedians do pop up who admit they are sensible and driven and thoughtful, and possibly not even funny off-screen, we tend to think there is something odd about them.

Psychologically the cracks are showing as clearly as those in Augusto’s chalk-white make-up after a long day on set, as he dreams of wiping off his clown face in public and receiving the acclaim he feels is rightfully his. And his fall from grace, when it comes, is unavoidable.

Based on a true story of Arlindo Barreto, who played Bozo the Clown on Brazilian TV for several years in the 80s without ever being able to reveal his identity, Bingo: The King Of The Mornings follows a typical trajectory of success, overreaching hubris, failure and redemption.

This is Daniel Rezende’s directorial debut, though he has an Oscar nomination under his belt for editing City Of God (he also won the BAFTA), and his skill is apparent. Bowling along at a cracking pace, Rezende’s film is a thoroughly engaging tale with a pitch-perfect retro look. Brightly coloured sets, cassette players, longish flicky hair on men and women, and 99 Red Balloons playing in the background – all add a buoyancy and joi de vivre that act as a welcome counterweight to the growing bleakness as Augusto’s self-destruction gathers pace.

Brichta is an always-winning presence, his Augusto arrogant yet talented, hubris-filled, yet increasingly (and destructively) self-aware.

Meanwhile Leandra Leal’s Lucia is driven yet weary, having to run the programme and fight through the sexism and sleaziness of the 1980s workplace, with a backbone of steel that Augusto, who does not appear to have been tested until now, can only dream of.

“The tiniest mask in the world”, the professional clown who initially trains Augusto calls the familiar red nose. But for Augusto, Bingo’s mask is the very opposite, smothering the man inside.