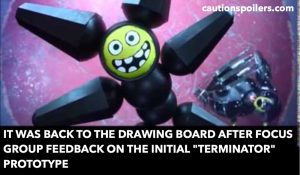 I took my two boys to see Big Hero 6 at the kids’ club cinema this weekend and we all loved it. It’s funny, touching, sad, exciting, and beautifully animated. I love films that create a world that is still partly recognisable and San Fransokyo is exactly that.

Yes I know Big Hero 6 came out two years ago but after the craziness of 2016 I was kind of hoping I could reboot my life and go back to 2014. Just imagine, I can now watch Arrival, and John Wick, and Interstellar for the first time again, and also what do you mean Donald Trump wants to stand for president, hahahahahaha.

Hiro Hamada is a teenage boy who lives with his brother and cafe-owner aunt Cass, and spends his time building robots for fights. His older brother Tadashi is already a student at the local Institute of Technology, under the renowned Professor Callaghan. Tadashi and his friends are continually inventing new tech, and Tadashi himself has developed Baymax, a snuggly inflatable robot who looks after people’s physical and emotional health needs.

Baymax is a healthcare assistant whose sole mission in life is to make his owner feel better. He has been designed to be unthreatening and huggable, like John Goodman was before he was in 10 Cloverfield Lane.

In fact he’s so helpful and concerned that he won’t actually power down and leave you alone until you’ve told him that you’re fine. Honestly he’s like your mum who’s always at her most irritating when she’s being nice which makes you feel really guilty. Baymax is also (like mums) completely obsessed with puberty and any resultant mood swings, and most decisions are met with a query from Baymax as to whether such a course of action will help or hinder Hiro’s puberty-related emotional state.

Hiro is encouraged to apply for the Institute, for which he needs an amazing invention, and he comes up with microbots. Controlled through thought via a headset, they are tiny robots that, in their thousands, can link up and create pretty much anything, The opportunities for their use are endless.

He’s offered a place at the Institute, though not before Alastair Krei – an entrepreneur – has offered Hiro money for his invention. Hiro refuses, preferring to go to the Institute with his brother, but as they are heading home, a fire breaks out. Tadashi rushes back into the burning building to save the professor but is killed.

Weeks pass and Hiro, devastated by grief, doesn’t want to start at the Institute. However by chance he charges up Baymax, who wanders off with Hiro’s last microbot, which has “found” more like itself and is trying to link up with them.

They end up in an old warehouse, where he and Hiro discover millions of new microbots being made. It’s at this point that it becomes clear that Baymax isn’t really much of a healthcare superhero, unless you’re have a mild bug, or maybe a paper cut.

First he gets stuck in a window getting into the warehouse, then he can’t run fast enough to outrun the microbots which come after them, then he gets stuck in the window AGAIN when they’re trying to escape. They do however discover a sinister man in a Kabuki mask, who appears to be controlling the mini robots using a headset.

Hero realises he can’t face down Kabuki-mask man himself so he enlists Tadashi’s close-knit group of friends from the Institute.

GoGo, Wasabi, Fred and Honey Lemon, Hiro’s new team, are soon equipped with superhero outfits and powers. My favourite was Honey Lemon, mainly because her superhero alterego has a handbag. Why don’t more female superheros have handbags? Judging by the average contents of the average handbag most woman are carting around more than enough “stuff” to save the world from pretty much any eventually.

Whether a particular catastrophe requires money in small change, super sharp nail scissors, a torch, a hairbrush (seriously – have you ever trodden on one? They make Lego feel like soft cashmere slippers), a mirror for directing the sun and causing a fire, and of course 75 quite old mini boxes of raisins for, er, something, we ARE who you need in an emergency.

But before the friends can become superheroes, Baymax needs some work. He is adorably squishy, like a giant marshmallow. But his extremely slow running away from the mild peril typical of children’s films also needs addressing. Hiro decides to make Baymax a tough exoskeleton to protect him and teaches Baymax karate. (Can you imagine doing karate with an unprotected giant marshmallow? You’d be flubbelled to death. Yes I just invented “flubelled”. And now I’m to scared to google in case it actually has already been invented and means something really rude in the Urban Dictionary).

Tracking down Kabuki-mask man, the team have to find out his evil plan and defeat him before, I don’t know, Baymax’s battery runs out. Luckily Baymax’s battery is not your standard iPhone battery, almost instantly giving up after 10 hours recharging because you had the temerity to open Notes and type “eggs” in your shopping list.

Like the best kids’ films there’s plenty for adults too. The story is clever, and I utterly failed to spot the bad guy. Admittedly I am terrible at spotting twists or bad guys in films (I still go on about spotting the twist in The 6th Sense and that was about 100 years ago back when Bruce Willis was, well, Bruce Willis) but in this one I thought that I might have a head start on my rather dim children.

No! I did spot the bad guy but it was the wrong one. Luckily Baymax, Hiro and the others are much cleverer than me, and more resourceful so what you end up with is a happy-sad but actually remarkably satisfying film that manages to avoid an over inflated sense of its own importance. (See what I did there.)