You are here: Home / Film Reviews / Big Bad Fox And Other Tales 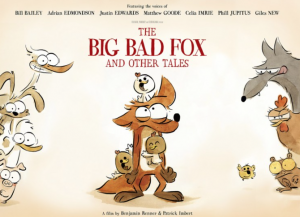 From accidental abandonment in a butcher’s van to being packaged up in a polystyrene-filled box, the adorable baby Pauline, star of the first film in this trilogy of tales, is never less than happy.

Being a child of the 1970s I did question the necessity for the BBFC warning “some dangerous behaviours” at the start of Big Bad Fox And Other Tales; but then Pauline was sucked out of an aeroplane, Pig, Rabbit and Duck jumped out after her, and my 6 year old piped up next to me “I want to try that!” So all I can say is, well done BBFC.

The three plays are performed by a cast of animals, each story linked by opening and closing curtains on a stage. All are set on a farm in the countryside, near a wood.

The film is directed by Benjamin Renner and Patrick Imbert, and all three tales are based on Renner’s books (he also directed Ernest & Celestine, nominated for Best Animated Feature at the 2014 Oscars).

The farm houses the conscientious Pig (Justin Edwards), the impulsive but well-meaning Rabbit (Adrian Edmondson) and Duck (Bill Bailey), the lazy Dog (Phil Jupitus), along with Hen (Celia Imrie), several of her chicken friends and a wide variety of work ethics.

In the nearby forest resides the would-be big bad Fox (Giles New), who yearns to be a vicious killer; and the actual vicious killer Big Bad Wolf (Matthew Goode), who blends sociopathic murder planning with an enticingly devil-may-care attitude.

Baby Delivery, the first play, combines everything required for a terrific action thriller and all in less than half an hour: a quest, explosions, great bravery, amazing stunts, a cute kid, and plot lines that invite a Twitter pile-on with their casual disregard for the current obsession with rooting out funny yet problematic content in children’s films (in this case posting Pauline home via the mail, well-sealed with parcel tape).

After a lazy stork en route to deliver a cute little bundle claims his wing is broken, the hard working Pig decides to deliver the baby himself – mainly because Duck and Rabbit have got involved, and their grand plan involves catapulting little Pauline all the way from the farm to Avignon, where her new parents are waiting.

Pauline is always a gurgling delight, her beaming face sticking out from a white sack. But even with sensible Pig in charge she still has to suffer various indignities before her arrival at her new mum and dad’s house.

It’s a fantastic opener, and the funniest of the three stories – its dry wit will appeal to adults and older children (“I’ve just cut the head off one of my children” says Pig, after declaring his vegetable garden plants are like his offspring). And there are still enough pratfalls and explosions here and throughout the movie to keep the little ones happy too; as well as unexpected twists, like the Chinese-speaking zoo escapee Tarsier (Yves Yan) that they find in the woods.

The second story is the titular Big Bad Fox, though he’s one who rather over-commits and under-delivers in that department. It’s a study in identity, though don’t let that put you off. The story is actually funny and charming, as three stolen hens’ eggs hatch in front of the thief (the not very big bad fox), and the chicks immediately assume he’s their mother.

In a new take on nature vs nurture, the chicks need a lot of parenting as – convinced of their own genetic fox-ness – they have no fear of the genuinely threatening Big Bad Wolf (Matthew Goode), who is determined to eat them once they’ve reached dinner-size.

I was impressed Renner managed to find an acceptable resolution, considering their poor mother has been without her babies for months by the time they are finally reunited. With both she and Fox attached to them, I was steeling myself for a biblical Solomon-like solution. Hen is more plucky than clucky, and she and her fellow hens are more than a match for the Wolf. But she does eventuality allow Fox to share the parenting, in exchange for teaching all the hens and chicks how to defend themselves against predators.

The third story, the festive Saving Christmas, may seem unseasonal though I’m a sucker for snow and Santa-in-peril stories at any time of year (as are my children; we’ve spent a good chunk of this year’s heatwave indoors watching Polar Express).

At this point I should give a spoiler warning – about the film, not my review – as a character in Saving Christmas boldly announces that “Father Christmas doesn’t exist”. Luckily this went over my 6 year old’s head (he was more interested in how various cute farmyard animals might die).

The animals are decorating the farm when Duck and Rabbit accidentally pull a toy Father Christmas off the roof. Convinced they’ve killed the real deal, they resolve to take over Santa’s Christmas Eve deliveries so as not to disappoint the world’s children. Luckily the real Santa appears, before they try to visit every child with a gift from a rubbish bin, delivered in a shopping trolley.

Big Bad Fox And Other Tales is a genuine delight. As with any collection of short, linked films, some are more appealing than others. My children loved Saving Christmas, I adored Baby Delivery. That’s not to say Big Bad Fox is weak; it asks interesting questions about identity and one’s true nature through the fox and the chicks: the former doesn’t feel he lives up to what a fox should be, while the chicks are bold and fearless because they’ve been told they’re an entirely different species.

Big Bad Fox and Baby Delivery are also about love – how it changes you, and forces you to put others first. To an extent so is Saving Christmas, as Pig sees that Rabbit and Duck’s wayward actions actually also come from a place of concern for others.

The animation is beautifully drawn but with a deliberately careless look. Mostly it has an endearingly timeless prettiness, though sometimes there’s a sparseness too. The British voice cast is pure class, wittily sparring their dialogue. There’s some deft characterisation; Pig is rather too protective of Duck and Rabbit, and Dog accuses him of not letting them reach their potential.

And I have to say, after watching these characters falling out of a plane, exploding in a petrol fireball, being sat on by a pyramid of chickens and walking through water on stilts, why there isn’t an animated stunt co-ordinator category at the Oscars by now?