You are here: Home / Film Reviews / Beast Of Burden 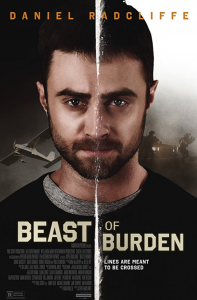 A beast of burden is usually a mule, and that’s actually what pilot Sean Haggerty (Daniel Radcliffe) is; a mule for a violent cartel, running drugs over the Mexican border.

He’s also burdened with much more though, and has got himself caught in a mesh of interlocking dangers that are gradually crushing him.

Sean is a reasonably ambivalent character – in theory he’s got into this for the best reasons, as his wife Jen (Grace Gummer) is ill with ovarian cancer, and needs treatment that they can’t afford. And it’s probably partly his own naiveté that has helped create this mess.

But he’s also clearly got a past, having been dismissed from the US Air Force, and with all his benefits rescinded. He has also been flying for the Peace Corps. It is unclear if he still is, though that’s what his wife, stuck at home overwhelmed by her own fears, and self medicating with alcohol, thinks he’s doing.

The film takes place mostly in a battered single engine plane, flown by Haggerty, whose concentration is constantly interrupted not only by the knowledge of what he’s doing but by endless phone calls.

But as his activities come back to haunt him, everything starts to unravel in the air. The cartel moves his landing place. It’s an hour’s flying time away and he’s worried about fuel. He’s also double-crossing the cartel by for the Drug Enforcement Administration (DEA). He’s delivering twice as much cocaine as he was originally told. And then Jen disappears.

Despite the darkness, bad weather and lack of space, the little plane never feels claustrophobic. If anything it’s a potential source of freedom, literally and figuratively. Though he can’t avoid those phone calls. And so many of them! I was fully expecting one asking if he’d ever bought PPI, and maybe a chatty chugger requesting an increase in direct debits. Then his mum calling to berate him for not coming round for his tea.

His wife Jen phones, and her conversations with her husband make clear that their relationship, while based on love, is increasingly fractious and brittle; imploding under the pressures of her illness, their lack of money and his lying. She’s distant and needy, scared and lonely.

Then there’s his contact at the cartel, telling him that there’s trouble at the border.

And an unexpected call from a stranger, the mysterious Mr Mallory (Robert Wisdom), also employed by the cartel. Taken on to ensure Sean does what he’s told, Mallory is calm and politely spoken, as hired killers are wont to be in movies.

DEA man Bloom (Pablo Schreiber) is also on the phone; his organisation is as vice-like in its grip of him as the cartel, sending up a drone to monitor the plane’s progress. Sean is getting a new identity and a new life after tonight. Though Bloom makes it crystal clear he doesn’t give a toss about Sean’s difficulties, and the news about Sean’s wife is just another spanner in the works. He also increasingly seems to take a sadistic pleasure in Sean’s growing discomfort and fear.

On top of this, Sean’s also getting calls from insurance companies about his wife’s treatment and lack of funding; and his mum wants to know when he’s coming round for his tea (she doesn’t really).

It’s now we find out about his dishonourable discharge – information he gives in a matter of fact way because it doesn’t really matter any more. Everything is predicated on him making paydirt on his drug running and double-crossing.

There are lots of flashbacks about how Sean ended up in this situation, many of which are unnecessary; one in the hospital, where they first heard about Jen’s cancer, is replayed over and over again, a rather heavy-handed method of demonstrating how he reminds himself why he’s doing this. (Though some of the flashbacks are nicely shot, as a motel glows almost green in the night. In fact the lighting is one of the highlights.)

Beast of Burden does feel very repetitive with all those calls and flashbacks, rather than a spiral into despair. Sean isn’t likeable – that in itself shouldn’t matter, but despite Radcliffe’s best efforts he doesn’t seem real. The other characters are mostly disembodied voices. They don’t have enough depth for us to care about them, and for the rather daft dialogue to sound even passably realistic.

Near the end there’s a showdown between Sean and some of his adversaries, and suddenly for a few short minutes we’re in action movie territory. Then there’s another ending, which feels tacked on some time later.

This is though, a good-looking film. When Sean is on the ground next to his plane, they are silhouetted black against a beautiful dark blue sky, rich dark green grass between his feet, bright white airfield spotlights highlighting the richly-coloured darkness. Water scattered on the plane windows is red from light reflections, and looks like rose petals.

Radcliffe really has to carry the whole movie, and he’s pretty good. You can sense the growing panic, particularly as he realises it’s him against everyone else. (The lack of actual people in it makes it an odd film to get to grips with. I rewatched some of it the next day, and it did make more sense.)

Unfortunately hearing faceless voices intone dodgy dialogue dissipates tension (Bloom is much more believable when we can see him). Beast Of Burden is an interesting experiment, though it’s not novel – we’ve seen plenty of films with a protagonist stuck on one place. There was something about this that felt stagy – maybe it started life as a play? It might work better as one.