You are here: Home / Film Reviews / Battle Of The Sexes 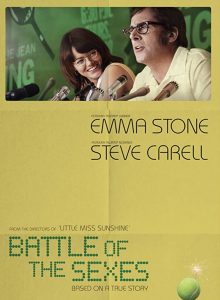 “Watch out guys, there’s no stopping this little lady!” says a reporter when tennis player Billie Jean King becomes the first female athlete to win more than $100,000 in prize money in one year, and it’s the response to that sexism, seeping not through not just the sport but through society, that Battle Of The Sexes chronicles.

Watching sexism play out is cringe-inducing, but not new. And much of Battle Of The Sexes isn’t about the King and her relationship with Marilyn, or the famous tennis match between King and Bobby Riggs at all, but about the misogyny, masculinity and emasculation that gets everyone to that point.

It’s 1972 and King (Emma Stone) is the most successful female player of all time. She’s World Number One, but what is missing from her sport, and which Billie Jean never shrinks from addressing, is that the women’s game be treated with respect. That means equal prize money, as they sell just as many tickets to their games and finals as the men do. It’s the refusal of the men who run the game, particularly Lawn Tennis Association head Jack Kramer, to accept this that leads Billie Jean and Gladys Heldman (Sarah Silverman) to decide to start up their own women’s tour.

Riggs (Steve Carell), Billie Jean King’s later opponent, is a showman, happily admitting he wants to “put the show back in chauvinism”. More sinister is the misogynistic Kramer (Bill Pullman), who expels several top women players when they move to the new tour.

Stone is terrific as Billie Jean King, highlighting the intersections of King’s strengths and weaknesses: drive on the court, frustration at her own mistakes, steadfastness in fighting to get women the respect they deserve, and self-doubt over her love affair.

Billie Jean is always fully prepared to put herself and her game above both her lover, and her husband. Larry King, her husband, understands this; Marilyn, initially, does not.

It’s while being prepped for a tour photocall that Billie Jean first meets Marilyn (Andrea Riseborough), and there’s an instant if confusing attraction between the married Billie Jean and the hairdresser. So electrifying is Marilyn’s touch that a confused Billie Jean doesn’t know how to answer her haircut-related question “what do you want?”. That electricity draws them together but getting in the way are homophobia, the demands of King’s sport and her marriage to Larry.

Billie Jean and Marilyn’s relationship is the most interesting part of a movie that boasts fast-paced and exciting first and last thirds, sandwiching a more turgid and repetitive central section.

The sexism is everywhere, as the women are patronised in interviews or touched as if they’re a pet. Bobby meanwhile has been financially supported by his wife Priscilla (Elisabeth Shue) for years, and after being given a job in her family’s business is now sidelined at work.

He’s a man always emotionally out of his depth and one step behind the times, racing through life to distract both the world and himself from his failures. Still, Carell imbues him with poignancy and at times warmth; a gambler with a crumbling marriage, who puts headline-grabbing courtside antics ahead of proper training, and joking calls-to-arms ahead of accepting women as equals.

Those failures must surely be behind Riggs’ determination to play the top women tennis players in showdown matches, combined with a healthy dose of hubris that means he can’t quit while he’s ahead. But he’s still an engaging character: “male chauvinist pig vs hairy legged feminist!” he garbles excitedly down the phone, after presumptuously phoning Billie Jean in the middle of the night to challenge her to a match.

Match preparation for Bobby is all fun, fun, fun: “this is my third nude shoot today!” he announces as he reclines on a sofa, his modestly (if he even possesses such a thing) protected by a strategically placed tennis racquet. Meanwhile Billie Jean is pounding pavements.

Of the women, Gladys leaves you wanting more. She’s an extraordinary feminist fixer, who gets things done and is scared of no-one. Twice discriminated against, as a woman and as a Jew, she doesn’t wait to be asked, or for circumstances to be perfect before making her move.

It’s a vivid film, as women’s tennis whites are gradually replaced with bright colour, and off-duty players wear scarlet trouser suits and purple flares. Meanwhile the camera lingers but never leers; with the close bond between Marilyn and Billie Jean often emphasised by excluding everyone else. Marilyn applies lipstick to her lover, or gently strokes and fluffs the tennis player’s hair before cutting it, while the camera is a close and intimate confidante rather than a spy.

Watch battle of the sexes on VOD with amazon.com

buy battle of the sexes on dvd or blu-ray from amazon.com

Watch the trailer for Battle Of The Sexes: