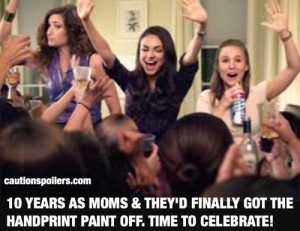 Bad Moms isn’t awful by any means – there are some good gags and the female leads are engaging and fun – but it could have been a whole lot more. Perhaps if it had been written by actual mums. Yes Bad Moms was written by men, which is why it feels like what mums tell people they get up to when they get together, rather than the unvarnished, rather seedy truth.

If Bad Moms had been written by women, it would have been an 18 certificate for a start.

But as it stands, that title is just wrong, like Free Willy, which still cost £8 to get in, or For Your Eyes Only which I well remember watching in a cinema in Lyme Regis in 1981 with several other people. It’s amiable enough but the message is limited. It’s yet another three-star movie that you desperately want to be a four-star movie and to just like a whole lot more, especially as lots of my mum friends hardly ever get out to the cinema so when they do they need some decent belly laughs, the kind that make you wish you’d done your pelvic floor exercises a little more regularly.

Amy (Mila Kunis) catches her husband enjoying a webcam girl, and throws him out. But if you think that’s bad, she also has to deal with horrible PTA leaders at her children’s school – and when the school cake sale becomes a lesson in oneupmanship rather than, you know, filling your kids with sugar and E-numbers and raising a bit of cash for some new poster paints, she leaves the organisation. (As far as I know it isn’t technically possible to leave the PTA in the UK, though do let me know if you’ve ever escaped.)

Soon Amy meets up with two other dissatisfied mums (though I’m guessing they could’ve been any two mums from her children’s classes). Kiki (Kristen Bell) has four children and a husband who does sod all to help. Carla (Kathryn Hahn) is a single parent who loves to have fun and is, shall we say, rather hands off in the mothering stakes.

After a night of somewhat low key jollity with her two new friends, Amy decides to run against evil PTA head Gwendolyn (a rather fabulously horrible Christina Applegate) for the top position. In movies as in life, love never runs smooth and neither do elections, so Amy’s support-gathering party starts off small and unattended. But soon mums are abandoning Gwendolyn and heading over to Amy’s for lots of alcohol and some table dancing, probably while wearing the American equivalent of Boden.

The really funny bits of Bad Moms are wonderful. Kristen Bell in a pink hoodie being used to demonstrate how to have sex with an uncircumcised penis is worth the cinema ticket cost alone. The webcam girl with the huge bush is also terrific (truly a sentence I never thought I’d write, but kudos to her, she pulled it off, as it were). But too often it’s all a bit dull. Drinking milk in supermarkets, giving your kids crap food for breakfast, if that’s the worst you’re doing as a mum give yourself a pat on the back and start spending those funds you’ve put aside for your children’s therapy sessions when they’re older as they won’t need them (though mine might so a loan wouldn’t go amiss now you’ve got all that spare cash).

Of the main actors, Kathryn Hahn is particularly engaging, and Kristen Bell is rather touching as a mum desperate to create a life for herself, though sometimes you want to shake her. Mila Kunis seems miscast as she’s really too perfect to be believable. I didn’t really sympathise with her which was a surprise as I’m a nice person, plus she’s got a loser husband, a dumb boss and lazy kids. And of course she looks incredible in the morning with a hangover which frankly isn’t going to win her many friends.

Bad Moms isn’t too long which sounds as if I’m damning with faint praise but I’m really not. So many movies go on for about four days while male directors muse on the perils of masculinity while all the women in the audience check their watches for the babysitter’s deadline and go to the loo three times as they’ve squeezed out two kids and just drunk half a bottle of white wine.

I was madly jealous of Amy’s house though. Please tell me, Americans, as I’ve been wondering this since Home Alone – are houses really that cheap over there or do you watch films like we Brits do, spending the whole movie thinking “how tf did she afford that amazing house at 32” and coming out even more depressed about your rubbish life?

This isn’t a film that tells us anything new and though Amy’s message is that we should all cut ourselves more slack, her expectations are pretty mild. Still this is Hollywood and a movie that brings the patriarchy crashing down probably isn’t on the horizon anytime soon. It is an entertaining, engaging film though, as long as you go in with your expectations as low as if your kids are invited to a playdate at my house.

Also please note I have never owned a Mom Bra like Amy’s.