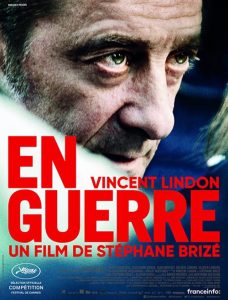 I’ll admit that as someone who hails from the North East of England I was both surprised and delighted that Stephane Brize’s latest film, about industrial unrest in France, references Sunderland, the city just south of my birthplace.

Though in some ways it’s not that unlikely, as it has long been an industrial area, despite the increasing numbers of call centres and retail units.

It pops up in a funny and illuminative scene, as striking French union members sit in a room opening envelopes from around the world containing supportive messages (the Sunderland missive points out they work under the same “assholes”) and donations from fellow workers.

I say supportive, though not all of them are – some are downright insulting and one person has seen fit to send their “merde” to the strikers. Still, at least they were good enough to use a padded envelope.

At War (the original title is En Guerre) is about a war. Like many wars it’s mostly boredom, and arguing, interspersed with short bursts of shocking violence (intentional and otherwise) which turn events; sometimes unexpectedly in their favour, and sometimes not in the ways the protagonists want.

It’s also about a different kind of war, a war of attrition, where behind the scenes bosses try to manipulate their employees into fighting among themselves rather than uniting against the CEO and his cronies.

What has brought the two sides into such open conflict is the refusal by factory bosses to honour agreements they made with their workers two years before; whereby their 1100 employees worked five hours a week unpaid, and forgoed their bonuses, to help keep the factory open. Now the bosses are going back on this agreement, despite the overall profitability.

Endless meetings between strikers, company officials, and even Government, from bare meeting rooms to ornate decorated government palaces, mean little more than arguments back and forth across the table. But the Board knows it’s united, while sooner or later cracks will appear in the union members’ solidarity.

Brize’s film focuses on two strike leaders: Laurent (Vincent Lindon) and Mélanie (Mélanie Rover). Divorced and debt-ridden, Vincent is soon to be a grandfather. The twenty-something Melanie has two kids and an unsupportive partner. Both are forthright and have learnt to give no ground.

It’s one of those situations where the strikers have to act perfectly, while the bosses can use all kinds of methods to undermine them. But one day, after they finally get their meeting with the German CEO of Dimke, the parent company, tensions boil over and everything collapses into violence.

Prize takes a partisan approach, though to be honest morally this case seems quite clear-cut. I watched it in Cannes among what appeared to be a very pro-union crowd – there was much clapping and laughing by people of all ages in the audience when the CEO got something of a comeuppance.

There was also laughter, though of the hollow kind, as meaningless platitudes fell from his mouth – his claims to love France, because he had a French mother and has a holiday home in the country (while his employees struggle on low wages), did not go down well.

This is by its nature a very talky film. There are lots of meetings, and people talking to, at and over one another. It takes a while to sink into the ebb and flow of the conversations (and arguments) so you can get a sense of people’s motivations, machinations and frustrations. (Some are of course obvious, some less so.)

It’s also a narrative that you can see grimly unfolding, recognising the subtle attacks by management, knowing nothing can be done.

Lindon is superb as Laurent, though his is a character unfurled for us through his actions rather than any back story. We don’t actually learn much about him personally apart from through his activism, and a few brief scenes about his pregnant daughter. And while right is on his side I wonder what he’d have done if the morality of their fight had been less clearcut. I suspect he’d still have acted in the same way, his tenaciousness as he forces a meeting with the German CEO something he simply can’t give up.

Laurent is a union man through and through, never giving up the struggle and constantly fighting on two fronts: against his bosses, and against fellow workers who disagree with his stance, and who have to face his white hot anger when they want to cross the picket line.

Lindon really gives a sense of how that solidarity has been Laurent’s lifeline all his working life; the potential collapse of that is almost more upsetting than the prospect of losing his job. His self-righteousness also means he ignores the very real reasons his colleagues start breaking the strike. It’s telling, and probably not surprising, that attacks on his home come from his fellow workers.

Rover is also terrific as Melanie though we hear even less about her home life than Laurent – just a snatched conversation about her two small children and unsupportive partner, another front she has to fight on.

Many people will find this film too wordy, and it feels long until the final stretch. Though the interleaving scenes lighten it somewhat – the envelope opening, the news reports, and the sudden outbreaks of shocking violence, unnerving and at times weirdly funny. (The jostling crowds, meetings chit-chat and arguments, the line of police shields in formation, and eruptions into a mini riot were so naturalistic I actually had to remind myself a few times that I wasn’t watching a documentary.)

And while usually I’m in favour of watching films in any way that suits – just keep watching movies! – this should be seen on the big screen, purely because it would be easy to lose track of it you were watching at home, with all the usual distractions.

En Guerre is an important watch, illustrating how two sides can never come together when bad faith permeates one of them. And how the people with most invested in these businesses are the ones with least money and least power.

The ending was a huge surprise to me, but actually makes perfect sense, shocking though it is.