You are here: Home / Film Reviews / Another Country 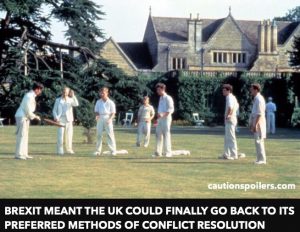 There’s something terrifying about rewatching a film you used to play over and over, but haven’t seen in years. Especially if you’ve told everybody you know how wonderful it is.

What if it’s full of the misogyny, homophobia and racism that went unremarked upon a few decades ago, the kind you look at now and think “how did I not spot that?” Or it simply turns out to be, well, dull?

I just re-watched Another Country, specifically to review it – having practically had it on VHS video loop during the 1980s – and luckily it has stood up remarkably well to the passage of time.

People’s attention spans are a lot shorter nowadays (which makes the current trend for overlong films even weirder). And the Cold War, though the chill it cast across Europe seemed never ending at the time, will be barely known to many people under 30. Mention the USSR and most people wouldn’t know what those letters stand for (though you could argue few did at the time either).

So I was certainly concerned that Another Country would feel impossibly dull and drag on by current standards. Luckily despite its languorous vibe, it doesn’t seem slow or stilted. There’s always something happening (admittedly usually cricket-related), and at 90 minutes it has to be reasonably pacy.

Based on Julian Mitchell’s play of the same name, the film tells the fictionalised story of Guy Burgess (Guy Bennett in this, played by Rupert Everett). After spying for the Soviet Union, he defected there – and now looks back from the vantage point of old age to his schooldays at an Eton-Like English public school, beset by bullying and brutality from both Masters and boys.

Guy falls in love with a fellow pupil, James (Cary Elwes), and then finds out that his open homosexuality could mean potentially missing out on his expected promotion to God, a sort of school super-prefect. This may sound petty reasoning, but consider the hold that English public schoolboys held over the top jobs in government, the civil service and the diplomatic service, and it becomes clearer why the role might be coveted so highly.

Bennett’s best friend Tommy Judd (Colin Firth), is a rich Marxist who wants to bring about the revolution of the workers whilst still attending one of the world’s most expensive selective schools. To be fair, he does his best to live by his principles, and then goes off to fight the fascists in the Spanish Civil War.

Homosexuality is so common at the school that when two boys are discovered together and one, knowing he will be expelled, hangs himself, the senior prefects wish they’d been allowed to deal with the situation themselves quietly.

Guy is openly gay, with reactions from fellow pupils ranging from unfazed-but-don’t-mention-it, to utter loathing. Bennett himself is a sympathetic character but not always likeable, especially when he shows his contempt for those he considers beneath him (when James is worried a Master will have seen him sneaking to lunch in an upmarket restaurant with Bennett, Guy is positively disdainful: “Oh they can’t afford to come in here”).

The actors playing the other schoolboys have an ease about them as they inhabit their privileged world. It’s a confidence that you only have at 16 or 17 if you’re a rich, white, British public schoolboy. (I’m not sure how much was acting; the credits were littered with Fredericks and Tristrams.) My only complaint is that they all seem so old. Self-confidence can make you appear older, and public schoolboys frequently seem to be 16-going-on-40-going-on-12. But often the prefects seem more Oxbridge Common Room than school study.

It’s not really a film that passes the Bechdel test but that’s more down to the selection processes of English public schools (educate one’s daughters? They’ll be wanting to be Prime Minister next. Oh). Anna Massey plays Bennett’s mother in a small but important role showing the unthinking homophobia of someone who has no idea her son is gay. Bennett clearly adores Mummy, having hated his father, who died whilst having sex with her (Guy’s casual relaying of this scene to James, which he discovered on hearing his mother’s cries one night, describes very well the exquisite embarrassment that has since kept them apart).

There is quite a lot of punting and rowing on lakes, and walking through old quadrangles with jackets casually slung over one’s shoulders. And there’s lots of cricket. Umpiring, playing, watching, and debating whether a Marxist should enjoy it. Throw in several long and longing glances at crushes across the croquet lawn, and some key Shakespeare quotes, and it’s amazing anyone ever came out of an English public school suitably prepared for holding the reigns of power across the British Empire, as they never seem to go to any lessons.

For a 32-year-old film, it doesn’t look its age, though its subject matter has dated. British public schools arguably hold even more of a hold over us than 30 years ago, though in different spheres – just look at the new breed of super posh thespians littering Hollywood movies nowadays – but who even really remembers much about the Soviet Union now? Or is aware there was a trend for ex-public schoolboys to spy for it? Now they’d be too busy playing a naked American in an HBO series while downplaying their privilege. What was common knowledge in the 1980s isn’t now, so I expect anyone watching this film now will be indulging in some extreme googling afterwards.

What Another Country highlights so well is how important what happens at school is to anybody involved, even years down the line. The seeds of Guy’s betrayal of his country are sown in the school rooms and cricket pitches of his public school, and it is all but impossible for anyone to move on. And such schools were, deliberately, just smaller versions of the society they inhabited.

Although Everett and Firth look slightly too old for their roles, they are both excellent – conveying the extremes of teenage feelings and beliefs, so young and yet so driven by a sense of what is right.

Guy is both childish and movingly brave, unable but also unwilling to hide his homosexuality from his fellow pupils despite the harm it could do to his prospects. And Judd holds tight to his convictions, to the extent that he is later destroyed by them.

Watch the Another Country trailer: