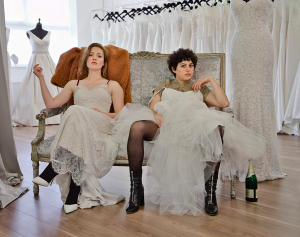 It’s rare to find a film that combines such huge respect for the gorgeousness and grubbiness of female friendship with such dizzying disrespect for the human liver.

They’re connected in this film of course, though I still feel drained just thinking about the sheer quantities of white wine consumed by best friends Laura and Tyler in and out of their Dublin flat, as they try to navigate their way to the lives they both want to lead while keeping their funny, scratchy, very real relationship alive.

The questions thrown up by Animals are faced by people of any age – life stages hit you when a decade rolls around, and sometimes only half-way through (who knew 45 would feel more of a milestone than 40? And why didn’t you tell me?)

Laura (Holliday Grainger) is in her early 30s, Tyler (Alia Shawkat) about to turn 30, which means their questions about what they’ve achieved feel more urgent, their reassurances to themselves more desperate.

Family and friends stop partying as hard and start having babies and buying houses. Or if that’s not what they want, or the way life has panned out, they at least have some measure of success.

Laura’s family are honest and not remotely pearl-clutching, yet even Laura’s sister, renowned for stripping naked and accidentally setting fire to her pubes, is getting engaged.

When Laura meets classical pianist Jim (Fra Fee) and then she too gets engaged, her friendship with Tyler, already starting to fracture, is stretched to breaking point – both women’s reactions reverberating around all their relationships.

Sophie Hyde’s film is entirely non-judgemental and often funny. Written by Emma Jane Unsworth and based on her own book, it delves honestly into the physical and emotional messiness of female friendship, presenting it in a way which defies the frequent sanitation of how we think, act and feel, especially when we’re young (30 to me is young).

The commonalities are there but also what makes the friendship between Laura and Tyler so special, and so desperately sad for both of them when it seems to be coming to an end.

It’s sometimes gruelling though, and I felt drained afterwards: the enormous quantities of alcohol consumed, the drugs, the endless late nights, the staggering home, the waking up in your clothes, the throwing up. When the two women are finding it hard to communicate, drinking is their language and their currency. Laura imbibes with deliberation: “I like the way you drink, with a real sense of mortality”, Marty, a black polo-necked poet, tells her. (I can’t actually remember if he was wearing a black polo-neck but that’s the aura that has remained with me.)

Jim’s arrival on the scene may be the catalyst but their friendship is already being tested. Laura wants to change conventions to suit her, but her changes are themselves conventional. For Tyler though – estranged from her family and thousands of miles from where she grew up – it’s not just about Laura moving on and wanting the things Tyler has always rejected. It’s also a reminder for Tyler that Laura may have just been taking a detour in her life and has always had a safety net, the option to move back into the normality of family life. She comes across as immature and cosseted; Tyler as emotionally self-reliant.

The realities of Jim’s success – huge talent plus training, practice and lots of hard work – are eye-opening for Laura, who has called herself a writer for ten years but in that time has written almost nothing. She scribbles in her notebook but mainly hides behind quoting well-known poets, or other creative people, even if they’re awful (step forward Avant Gardener, a performance poet who is both over-confident and under-talented, but at least he has a brand).

Jim’s lifestyle is the opposite of the bohemian myth and show how true talent has to be worked liked a muscle. His neat and sparse apartment with its bare brick walls and pale colours contrasts with Laura and Tyler’s flat, crammed with trinkets and old furniture. She and Jim are soon serious, though it’s often a relationship more imaginary than real as he travels the world working. One night she pitches up to his performance (free white wine!), out of her depth, boredom turning to awe, wanting to claim ownership of him even though she has come late to his success. Insecurities mean she’s tempted by Marty (Durmot Murphy) who despite his mockable image clearly adores his craft, and works to spread that enthusiasm.

Laura does start writing, but she seems more directionless than ever. It’s hard to write about what you know when maybe you can’t remember that much of it when you wake up.

Holliday Grainger brings a guileless luminosity to all her roles, and this is no exception – as well as the dewy skin from that stage of life when drinks and drugs only leave you with smudged make-up rather than dehydration and wrinkles. She’s terrific as Laura, her eyes showing the fear and inadequacy she feels when she steps out of her comfort zone and realises she’s been playing at creativity.

Shawkat is brilliantly spiky, pushing people away and pulling them close, Tyler’s emotional resilience constructed over years of rejection starting to crack.

Animals isn’t a comfortable watch, whether you’re in that situation now or have come out the other side. At times I found it far from enjoyable, and the repetition of their lives is frustrating. But its themes – finding the right place for you, and learning how to move on without moving away from what you hold dear as you get older – are common, even if it feels incredibly lonely going through it.

Also true is Tyler’s line about waking up at 45 and wondering how you got there. (I’ll raise a rueful glass of Sauvignon Blanc to that. Just the one though.)

Watch the trailer for Animals: