You are here: Home / Film Reviews / Anchor And Hope 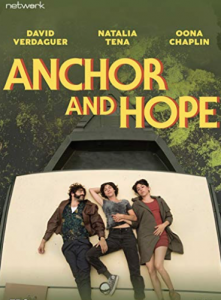 “Is it in?” Roger enquires as they try to make a baby. But in this witty and sometimes exhausting drama of emotions, this is a role reversal.

Kat is trying to inseminate her partner Eva with her friend Roger’s sperm via a syringe, while Roger is in the other room.

Loads of babies are conceived – in thought or in deed – after several bottles of tequila, on film and in real life. And Eva (Oona Chaplin) and Kat (Natalia Tena), two women who decide one drunken night to make a baby with Roger (David Verdaguer), manage to imbue what could be a rather soulless, mechanical process with love and lust.

Eva wants a baby with Kat but her choice of Roger for the father seems driven by other issues. She’s already jealous of his and Kat’s deep friendship (and their ability to converse together in Spanish) when he comes to visit from Barcelona. She doesn’t even want him to stay with them.

Their drunken pre-baby evening is extraordinary, after Kat and Roger have returned from the pub – fuelled by fluctuating emotions, Eva dances round the other two as she is by turns put out, involved, envious, and finally sick in a bucket. It’s a sign of what could be on the cards: the best of intentions splintered by intruding feelings.

But Eva is deadly serious, and the next morning as they nurse hangovers, she drills down into Roger’s family background, from psychopaths to twins.

As their story unfolds, punctuated by alternately petty and important skirmishes, with factions that ebb and flow, the boat sails on through London: past leafy green parks, tower blocks and industrial sites. They’re separate from it on the canal, stopping off at will, moving on when regulations force them to, but always in control of where they’re going.

Words of caution are sounded by Eva’s mother Germaine (Geraldine Chaplin). After immersing herself in hippy culture and free love, now her life is, by middle class London standards, entirely conventional as she wafts around in floaty white clothes and gives an incantation over the couple’s dead cat Chorizo. Kat is furious at her hypocrisy: “You like the idea of rebellion but you always knew you would conform!” she shouts back over dinner on the boat.

Germaine is wrong in her criticisms of their family unit – her argument seems to be that now she believes she’s discovered there’s a reason the traditional family is the norm, a belief which excludes many and brushes under the carpet myriad problems and contradictions within “traditional families”. But the pregnancy brings out unexpected and strong feelings in all three of them.

It’s also telling that it’s Kat who argues back against Germaine so forcefully, when it is she who then has most misgivings about their plans.

(Later it turns out that Eva is more like her mum than we, or she, realise, in the sense that this life on the water may well only be a temporary thing for her.)

Once Eva is pregnant it’s Roger who becomes genuinely enamoured with the idea of being a father. But he’s excluded from the scan (only two people can go in at once) and then Eva tells him he has to go back to Barcelona: “you’re not the father, you were never meant to be the father”. Something incredibly painful for him to hear, but for Eva it’s just a reiteration of the boundaries she’s planned. Kat is trying to cope with her own misgivings about parenthood and soon she too is fighting with Roger.

As a couple Eva and Kat are the real deal, though Eva is the more complex of the two. Oona Chaplin is terrific as Eva struggles with a maelstrom of emotions swirling around the three of them before they even decide to try for a baby. She gives Eva’s initial insecurities and eventual self-reliance a very human edge; and Eva’s relationship with her mother, and what she gets from her, is deftly drawn. Natalia Tena’s Kat is a fizzball of forceful emotion at every stage, though her characterisation doesn’t go very deep.  David Verdaguer ensures Roger isn’t just the catalyst for searching questions in the women’s relationship; he’s a bouncy joy as the cheerfully puppyish young man who then finds he cares more than he thought.

The film does feel too long and both Eva and Kat can be, as characters, frankly annoying. But what stops this story turning into a whinge fest is the script.

Writers Carlos Marques-Marcet and Jules Nurrish (Marques-Marcet also directed) have a terrific ear for realistic dialogue. Even Kat’s big speech to Germaine comes across not as a polemical device but as a justifiably angry young woman not only defending a way of life she must have thought Germaine understood and agreed with, but also deflecting her own fears about pregnancy and her relationship.

The banter between Eva, Kat and Roger never feels forced, and neither does the incidental chit-chat when other characters are (briefly) introduced. The comedy comes from this banter, with poor Roger’s extraordinary facial hair (imagine a full moustache, sideburns and beard with a clean-shaven chin) labelled by Kat as “like a parking spot for a pussy”.

This all-consuming, constantly moving three-way relationship is well plotted. True love and longstanding friendship are strong but individual insecurities can threaten the strongest of bonds.

In a few moments that houseboat can see deep conversation and sniping, kissing and hugging, joking and arguing, sex and solitariness. As they pair up and move apart, minute by minute, the lack of clarity and honesty leaves each of them uneasy. And how honest can you be when your feelings are constantly shifting?

Anchor And Hope is released in UK cinemas on 28 September 2018.