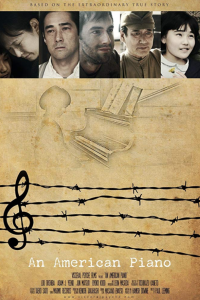 During World War Two, Youko (Leon Masuda), a little girl living in Japan with plans to train to be a concert pianist, sits at her grand piano playing Chopin. Across the way, an Allied prisoner of war listens and catches her eye.

Based on a true story, An American Piano is set in 1945. The war is still raging, though despite the obvious dangers of the air raids, for Youko it’s a chance to lie on the grass watching the pretty plane formations in the sky.

Her mother (Qyoko Kudo), terrified, has to scoop her up and rush her to relative safety.

Her parents try to shield her; despite the bombs her mother tells her as they hide that she’s always safe in her arms. Her father (Jun Matsuo) runs a factory, and they’re always targets so danger comes near.

One day the local policeman turns up on their doorstep with news that next door they’re building a POW camp. Everyone living nearby is encouraged to move but her father refuses; nowhere is safe so they might as well stay.

Her playing gives the POWs something to listen to, beautiful and timeless music that they might well recognise drifting over the air, as well as giving her family brief respite from the exhaustion of carrying on.

An American Piano is a heartfelt, emotional journey; films about transcending hate through individuals connecting on a personal level often are. They can also succumb to triteness though director Paul Leeming avoids this – that this is a true story helps of course, but also the small cast and avoidance of unnecessary dialogue gives it a spare, realistic quality, and it never feels manipulative.

I loved some of the little details: the policeman (Lou Ohshiba) crying at the end of the war, for public shame and private shock. “I don’t know what to do” he weeps, as everything they’ve been conditioned into supporting is gone, along with their expectation of certain victory in a country where even beyond the usual air raids, two cities have been left as rubble after nuclear attacks; and the exposed piano keys moving up and down, sheer mechanics that with the addition of a brilliant composer and a talented little girl creates something that can, for a few minutes, help everyone forget their situations and even bring them together.

It’s a well pace film, coming in at just under 20 minutes, with good performances – Leon Masuda in particular is a delightful and affecting Youko, wariness acquired from war mixing with natural childish friendliness.

The small cast reinforces not only that Youko and her mum and dad are a little unit, but also how children automatically insulate themselves from horror unfolding around them. The lone policeman at the door, without his force backing him up, is an ambivalent presence, depending on whether he decides to toe the official line or bend the rules a little.

The film’s two cinematographers, Kazu Kaneto and Toshikazu Kanetohas, have done a terrific job – there’s a sepia tone to the movie with colours all slightly darker than reality, from the almost petrol-blue sky to the dark green foliage as Youko lies on the ground, watching the planes. The house inside is darker too, though it never feels cold or unwelcoming.

Check out my interview with director Paul Leeming and writer/producer Hamish Downie. You can watch An American Piano in full, below – though make sure you wait until the very end!

Watch An American Piano in full:

Watch the trailer for An American Piano now: