You are here: Home / Film Reviews / An Actor Prepares 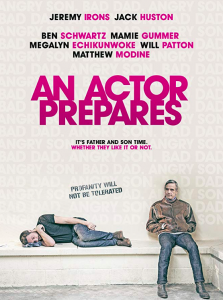 “If I do croak I want you to have my nuts… I know they’re big but they can probably make them fit.” Three-times Oscar winner Atticus Smith can’t resist sexual oneupmanship against his own adult son, even as he finally faces up to his own terrible parenting and possible death.

But he’s in LA, and Annabelle is getting married in New York.

After that he is due to play God in a new film. Atticus (a wildly entertaining Jeremy Irons) isn’t omnipotent himself, even if he acts like it, and he’s told in no uncertain terms the show will go on with another deity if necessary.

But the doctor won’t let him fly, so his estranged son Adam (Jack Houston) must accompany him cross-country.

Road trips in films are often similar, though rarely realistic, even when deadline-driven. They mostly avoid urgent requests for a loo just after you’ve passed the last services for 20 miles.

Real-life equivalents tend to be too stressful to be about anything more than getting from A to B without a small child being sick. Arguing over ancient slights in a humorous manner while being chased through a field by a bull is a luxury.

Director Steve Clark’s film is about two people trying to reach some sort of understanding – holding each other to account while also acknowledging their own mistakes. But it manages to travel a well-worn track with a verve and aplomb which means it’s never less than tremendous fun, with a measure of thoughtfulness too.

Father and son are more alike than they think – both use women. College teacher Adam is a woke bro sponge, sucking in other people’s oppression. But squeeze him, and out drips that mixture of smugness and sexism that seems to be the lifeblood of our bearded feminists. And my god, he’s so dull! At least Atticus seems like he’d be fun to have around even if he was constantly trying to squeeze your arse.

The course Adam teaches is called “Women in film – cinema through a feminist lens”. Huston is magnificent here – deliciously self-righteous, a tiny self-satisfied smile escaping even as Adam tries to suppress it, not only mansplaining feminism to his class of mostly young women but also appropriating their own movement by declaring it’s about the liberation of men too.

After a stab at acting he’s now a documentary maker; his second film, a decade after his first, “calls out a lot of feminists for not going far enough”.

Atticus meanwhile has been churning out movies of wildly varying quality for decades. I liked how throughout the film more and more titles from his filmography are mentioned. The Language Of Men, Charlie Everywhere, Trial Separation (for which we are also rewarded with a rather melodramatic clip), Never Look Back… though two do pop up in people’s reminiscences more regularly: Five Day Fuck, and the wonderfully titled Throwdown At Bitch River, which sounds like an exploitation remake of The Thorn Birds.

And now he’s been given a lifetime achievement award for work that has given joy to millions but has destroyed his family.

Irons is glorious as Atticus, thoroughly enjoying the blustering thespian while also reining him in, ripping off layers until we see the real man (a surprise not least to Atticus himself). It needs someone of Irons’ calibre and experience not to let Atticus overwhelm, or for the set-up to collapse into cliche. Though it would be pushing it to say Atticus doesn’t overshadow the movie; how could he not? As a character the ageing actor is always aiming to fill the screen, lead the story, draw the eye and the ear.

At every stop they make, Atticus is recognised by someone, incidents which bring Atticus as much genuine joy as his fans. He understands who has kept him in the limelight, and in return he gives his all to every role whether it’s good or complete dross.

It’s a sweetly old-fashioned approach, along with his offer to leave the water in for Adam after enjoying a luxurious soak in a claw-foot bath.

Atticus and Adam remind me of Edina and Saffy from Absolutely Fabulous – famous designer mum and a square child in sensible jumpers, who increasingly veers into superiority and superciliousness.

At one point father and son are rescued from their broken-down car by two young women who’ve just sold their business for a fortune and are now travelling across the country. They’ve brought their own shaman, and as Atticus enjoys a night of getting high, strumming a guitar next to the campfire (“I think this stuff’s pretty weak” he ruminates), poor Adam has to be guided through a rather mild drugs trip.

The film’s title comes from a book by the great acting coach Konstantin Stanislavski. Much of Atticus’s rudeness, bluster and bonhomie is performance as distraction. He’s used to turning on the charm, repeating anecdotes, but now faced with the real possibility that he will die when they operate on his heart he’s forced to face up to his life and whether it has really been well-lived.

He’s been a terrible father. He has a favourite child, and it isn’t Adam. He cheated on Adam’s mother. Near the end of their journey he sits in near-darkness before an interview, his craggy lines illuminated only by the traditional giant light bulbs round a mirror, all make-believe stripped away.

Thanks to Atticus, Adam is terrified of fatherhood, but now that choice could be taken from him as he faces his own health scare.

Huston is a terrific counterweight, and though Adam starts off irritating beyond belief, by the end of the film I had some sympathy for him – as the effects of Atticus’s parenting on Adam’s own adult life become apparent, and his understanding of what it is to be a man turns out to be as flawed as his father’s.

An Actor Prepares is a witty road trip with detours both traditional and surprising, and performances that know when to push and when to retreat. And I loved that it didn’t end quite as I was expecting it to.

An Actor Prepares is released on demand in the UK on 3 September.